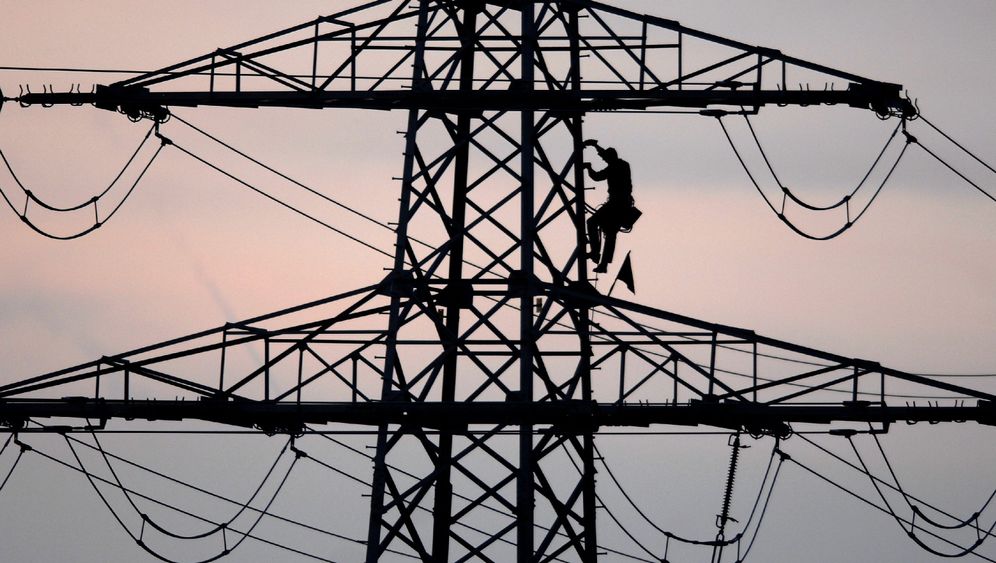 The northern German state of Lower Saxony is bracing for a wave of public protests against plans to build new power lines with 80-meter-high (260 feet) masts that are needed to prepare the country for a future of green electricity generation.

The resistance being mobilized by local communities across the state poses a political risk for Chancellor Angela Merkel's conservative Christian Democratic Union (CDU) nine months ahead of local elections there.

CDU state governor David McAllister wants to avoid the public backlash suffered by the governor of the southwestern state of Baden-Württemberg, Stefan Mappus, who has seen his support slump ahead of a key state vote in March due in part to demonstrations against the deeply controversial "Stuttgart 21" project to build a new train station in Stuttgart.

The new high-capacity power lines are crucial to Merkel's plan to expand renewable energy to four-fifths of power generation by 2050 from 16 percent now. They will be needed to transport wind power down from northern to southern Germany and to develop a far more integrated, pan-European smart grid.

In order to stick to the timetable of achieving 40 percent renewable power output by 2025, a total of 3,600 kilometers (2,236 miles) of new power lines will need to be built, according to calculations by the German Energy Agency. The Lower Saxony government estimates that at least 1,000 kilometers of those lines will run through the state because of its size and its strong wind power generation, especially in offshore wind farms in the North Sea.

The green revolution will radically change the region's landscape. The sleepy spa town of Bad Gandersheim, population 11,500, is up in arms over a plan by network operator Tennet to build a 380,000-volt, 190-kilometer overland power cable nearby linking transformer stations in Wahle near Braunschweig with Mecklar in the central state of Hesse.

Norbert Braun, the spokesman for a local campaign against the project, says the "monster masts," four times higher than Bad Gandersheim's church spire, will ruin the countryside. A total of 800 local people demonstrated in the town center in pouring rain in August in an unprecedented display of public protest. Fifteen further citizens' groups have been set up in villages up and down the planned route of the line.

In October, they lit 300 fires stretching more than 100 kilometers, with each fire marking the possible spot of a towering pylon. "It was a wonderful signal against the destruction of nature," says Braun.

In the nearby village of Billerbeck, every inhabitant signed a petition against the power line. The region is worried about the impact of the project on tourists, and Bad Gandersheim sees its reputation as a spa town under threat. Citizens are also afraid of the electric "smog" from the high-voltage cables, and are worried that real estate prices may fall. Local councils have joined in the campaign. "We're all together on this" says Ronny Rode, the mayor of the neighbouring town of Kreiensen.

Even the local church has joined the fight. God's creation must not be "mutilated by steel crosses in the sky," thundered Protestant pastor Bernd Kuchmetzki-Ludwig from his pulpit.

It's a similar story in towns and villages across Germany, where a bitter row is raging between two groups that basically have the same aim: to protect the environment.

Lower Saxony already has thousands of wind turbines which are destined to be replaced by bigger versions up to 150 meters (492 feet) tall thanks to ample government subsidies and an increasing shortage of space.

Governor McAllister is trying to defuse tensions by pandering to both sides. He knows that the big power projects aren't just opposed by Greens and environmental campaigners, but also by many supporters of his own party. That is why he has blocked planned research into underground CO2 storage in the state.

And when he voices support for Merkel's green energy revolution, he does so where it attracts least attention, like in a guest editorial in the little-known regional newspaper Rundblick in which he said: "Those who in the same breath criticize nuclear power, coal-fired power stations and the expansion of network power lines that are indispensable for renewable energies are endangering our economic prospects."

Tennet, the construction firm, has tried hard to keep local communities informed about the Wahle-Mecklar power line and says it has submitted 1,835 folders of documents to local authorities.

"We stand for openness and transparency," says Lex Hartman, the head of Tennet Deutschland, a Dutchman who arrived in Germany a few months ago. "No one likes power masts, I don't either," says the 54-year-old. "But we must ensure that the network expansion is accepted nevertheless."

Delays Also Due to Red Tape

In addition to local protests, complex planning approval procedures are delaying construction. For the Wahle-Mecklar line, Tennet proposed seven different routes. The Lower Saxony authorities had to check the impact of each one on five different airfields and several nature conservation areas. But officials acknowledge that all this effort is unlikely to persuade people to accept the masts.

Inconsistencies between regional and national planning laws are also causing confusion and delays. Near the northern city of Bremen, a 56-kilometer, 380,000- volt line was originally due to have gone into operation in 2010 -- but it hasn't even reached the stage of planning approval. The power line operator has submitted three different construction plans in response to requirements stipulated by various authorities. First as a purely overland line. Then with half the line laid underground. Under the latest plan only eight kilometres of line is to be laid underground -- local people and the municipalities affected have already filed a legal complaint against the latter plan.

Putting power cables underground is expensive and renders them less effective because they can't cool off as well as overland cables -- that means less power can be transmitted via underground cables. In addition, they dry out the soil above them because they reach temperatures of 90 degrees Celsius.

The lower capacity means network operators must lay twice as many cables underground as would be needed above ground, driving up costs. Repairs are also more difficult and take longer. "Underground cables are four-to-seven times more expensive," says Hartman of Tennet.

The advantage of HVDC is that the lines don't get as hot, lose less power and don't create an electromagnetic field, which means they generate hardly any electric smog. The technology is currently used with undersea power cables. "Everybody in the region would accept HVDC," says campaigner Braun. But direct current can't simply be integrated into the alternating current grid. "At present, the cables are suitable for stretches of hundreds of kilometers that don't branch off, but definitely not as a replacement for conventional maximum-voltage lines," says Heinrich Brakelmann of the Institute for Energy Transport and Storage at the University of Duisburg-Essen.

The plant will be a 25-meter-high concrete block and the entire installation will be the size of 70 soccer pitches. As soon as the plans for Moorriem became public, local citizens demonstrated and gathered signatures against it.

NorGer, a Swiss-Norwegian consortium, is trying to overcome public resistance by offering to pay for the refurbishment of a local pedestrian zone. Such compensation payments aren't uncommon in the power sector.

But most locals would rather find an alternative to the power cables. Braun, for example, visited the regional motorway planning office and suggested that power cables could be laid into the sound insulation walls that run along the A7 motorway. The planners, he said, listened to his suggestion with interest.