It was the afternoon of Sunday, May 16 when Germany's coalition government of the center-right Christian Democrats (CDU/CSU) and the liberal Free Democratic Party (FDP) finally got down to the business of governing -- six months after taking office. In her office on the eighth floor of the Chancellery in Berlin, Chancellor Angela Merkel met with Finance Minister Wolfgang Schäuble, who had just been released from the hospital.

The chancellor briefly asked about the health of her finance minister, who for several weeks had only been able to perform his official duties with difficulty. After being plagued with a surgical wound that refused to heal properly, Schäuble had to be readmitted to the hospital when he had an adverse reaction to a medication.

The two politicians eventually turned to a similarly urgent case, Germany's national budget, which is currently faring almost as poorly as the minister who is in charge of it. By the end of June, Merkel and her finance chief will not only be called upon to assemble an austerity package, but will also have to restructure the government's finances from the ground up.

The Need to Cut Costs

It's an enormous challenge. The German government faces an ongoing gap of €75 billion ($93 billion) between what it takes in and its expenditures, something that economists refer to as a structural deficit. Contrary to previous assumptions, this deficit has risen by another €5 billion because projected tax revenues have turned out to be lower than expected, as the most recent forecast by the relevant experts showed. The need to cut costs is growing, partly as a result of the new "debt brake" or debt ceiling provision that has been incorporated into Germany's constitution, which will require Merkel and Schäuble to reduce the government's budget by an additional €10 billion a year between now and 2016.

The task of putting together the budget is more difficult than it has been in years, and not just because of the sheer magnitude of the necessary austerity package. The success of Merkel and Schäuble's efforts will be critical to nothing less than the fate of the CDU/CSU-FDP coalition government and, even more importantly, the stability of the euro.

The chancellor wants to set an example for Europe on how best to cut costs. She wants to prove that the German debt ceiling works, and she wants to finally go on the offensive with her quarreling coalition, after weeks of defeats, flops and failures.

Merkel spent half a year putting off every unpleasant decision, out of fear of alienating voters in North Rhine-Westphalia in the run-up to a critical state parliamentary election on May 9. Instead, she made handouts worth billions, for example by increasing child benefit and reducing the value-added tax burden for hotels.

Now Merkel's government is short of cash and, after a bitter setback in the North Rhine-Westphalia election, has also lost its majority in Germany's upper legislative chamber, the Bundesrat, which represents the federal states. The loss of its majority will mean the government will need opposition approval for major legislation.

Since the election, Merkel has faced an almost unprecedented hail of criticism from within her own ranks. The Christian Social Union, the CDU's Bavarian sister party, accused her of poor management during the euro crisis. The wing of the CDU that represents the interests of Germany's famous Mittelstand (small and medium-sized enterprises) complained about a "lack of decisiveness" in enacting reforms. And Roland Koch, the governor of the western state of Hesse who announced Tuesday that he was stepping down, lectured Merkel on what her priorities should be in the coming weeks. "The time of caution," he said, "is over."

Now the chancellor must prove that she still holds the reins when it comes to the budget, the central task of this legislative period. As a result, Merkel and Schäuble, during their May 16 meeting, vowed to get down to the business of seriously saving money within the coming weeks.

But because it's also a question of power, Merkel and Schäuble began by laying out a taboo: The budget of Education Minister Annette Schavan will remain exempt from all cuts. As stipulated in the parties' coalition agreement, education expenditures are to be increased to €12 billion by 2013. Merkel and Schäuble reasoned that because today's education is tomorrow's growth, Schavan should not be expected to make any spending cuts.

In doing so, they were clearly giving Merkel's main adversary, Koch, the brush-off. Two weeks ago, the governor of Hesse took every opportunity to demand cutbacks in education spending.

Merkel and her finance minister also decided to generate the necessary savings mainly in the coming year. This means that instead of the €10 billion originally foreseen, Schäuble will have to come up with €15 billion in 2011.

An Ultimatum to the Ministries

The first concrete steps followed at the beginning of last week. Schäuble instructed Werner Gatzer, a senior official in the Finance Ministry, to write a letter to the federal ministries that included new cost-cutting targets for all members of the cabinet, with the exception of Schavan.

The letter is written in the tone of an ultimatum. "To be able to guarantee the necessary contributions to consolidation efforts, I expect initial savings of up to around €3 billion from your ministries," Gatzer wrote. The consequences are far-reaching: All budgets, except that of the Education Ministry, will be cut, some drastically. Gatzer wrote that there could be no sacred cows when it came to deciding where to make cuts, but generously added: "You are essentially free to choose the areas in which you wish to cut costs."

Of course, the gap in the federal budget cannot be closed through budget targets alone, which is why Schäuble has instructed his officials to draft even more proposals on how to reduce the government's spending and increase its revenues.

The experts at the Finance Ministry have assembled a list of measures from which their minister and the chancellor can choose. They include trimming subsidies. For example, the waivers on Germany's ecological tax that some companies now enjoy, and which currently save industry €6 billion a year, could be reduced by a quarter or even half.

The officials are also considering an increase in highway tolls for trucks. Depending on the size of the increase, the government stands to collect several hundred million euros in additional revenue.

In general, Schäuble hopes to increase the federal government's revenues from assorted fees. It is a potentially lucrative measure for the government, because the list of possible candidates is extensive, ranging from aviation safety fees to patent charges. This measure is also expected to contribute several hundred million euros in new revenues.

Schäuble expects to raise billions in revenues by increasing unemployment insurance contributions from 2.8 percent to 3 percent of gross pay. Experts at the Finance Ministry have calculated that it would, of course, be better for the federal budget if the contributions were raised to 4 percent of gross pay, which would enable the Federal Employment Agency to cover its costs in the long term. Under that scenario, the agency would already be in a position to do without federal subsidies as early as next year -- and Schäuble would save another €8 billion.

Merkel and Schäuble plan to make considerable demands on ordinary people. They can expect vocal protests in return, which the chancellor intends to counter with an argument that hasn't been heard very often in debates about austerity measures in Germany: the concern over the stability of the euro. According to the new reasoning, the federal government cannot expect deep cutbacks from cash-strapped countries like Greece or Portugal if it doesn't at least require its own voters to make moderate efforts.

After all, austerity packages are being prepared in every European capital at the moment. This is partly because economic stimulus programs and bank bailouts have thrown public budgets out of kilter everywhere, and partly because the ailing euro urgently needs decisive support.

As the events of recent weeks have shown, all euro-zone members will have to clean up their finances if they expect the common currency to still be around in 10 years' time. "We have to reduce the deficits in all member nations of the euro zone," says Schäuble.

But the jury is still out on whether the politicians will succeed in reassuring Germans by highlighting the precarious financial situation of other euro-zone countries. Merkel's critics tends to predict the opposite, saying that referring to the euro crisis could make the austerity package even more unpopular, particularly with the Christian Democrats' coalition partner, the business-friendly FDP.

The liberals have, for the time being, come to terms with the fact that their pet project of tax cuts is off the table for now. But this has made the FDP all the more determined to make cuts in places that are inopportune for the CDU and CSU. Only a few days ago, Chancellor Merkel, speaking at the federal congress of the Confederation of German Trade Unions, pledged that unemployment benefits would not be cut under any circumstances. The FDP, on the other hand, has identified a particularly large potential for cutbacks in the budget of Labor Minister Ursula von der Leyen, such as an €11 billion program that helps unemployed people reintegrate into the workforce.

The liberals also feel that they can do without the CDU's plans to expand benefits for parents who are taking time off work to raise a child. They also oppose a proposed subsidy for parents who choose to stay home with young children instead of sending them to kindergarten, which the CSU has been demanding with an eye to their conservative Bavarian base. "It's dead," says one FDP budget expert.

Merkel can also expect resistance to her austerity plan in the Bundesrat. A number of state governors have sharply criticized Merkel's decision to categorically exclude cuts to the education budget. They are also skeptical of any cost-cutting ideas that could trigger objections among powerful interest groups in their own states, such as energy-intensive industries.

It comes as no surprise that leading conservative politicians are now searching for alternatives to economizing measures. "If we cannot satisfy the requirements of the debt ceiling on the expenditures side, it will be necessary to develop new revenue options by raising taxes," says Peter Müller, the CDU governor of the western state of Saarland. Müller is unwilling to reveal which taxes he wants to raise, but he has said that simply eliminating tax loopholes will not be enough. The CDU needs "decisions that are discussed and then jointly implemented," says Müller.

The coalition's financial experts also suspect that budget cuts alone will not be enough to raise the necessary sums in the long term. The rag can't be squeezed dry again every year, they say. For this reason, the experts are not categorically ruling out "revenue improvements" -- in other words, tax increases -- in the years to come.

Conveniently enough, the chancellor last week secured -- at least in theory -- access to the kinds of tax revenues which are highly popular with the general public. In a reversal of her previous position, Merkel has now advocated introducing a fee on financial market transactions, provided other countries go along with the idea.

If the plan succeeds, the chancellor will have eliminated at least some of her problems. Experts say that such a tax could generate revenues in the double-digit billions. 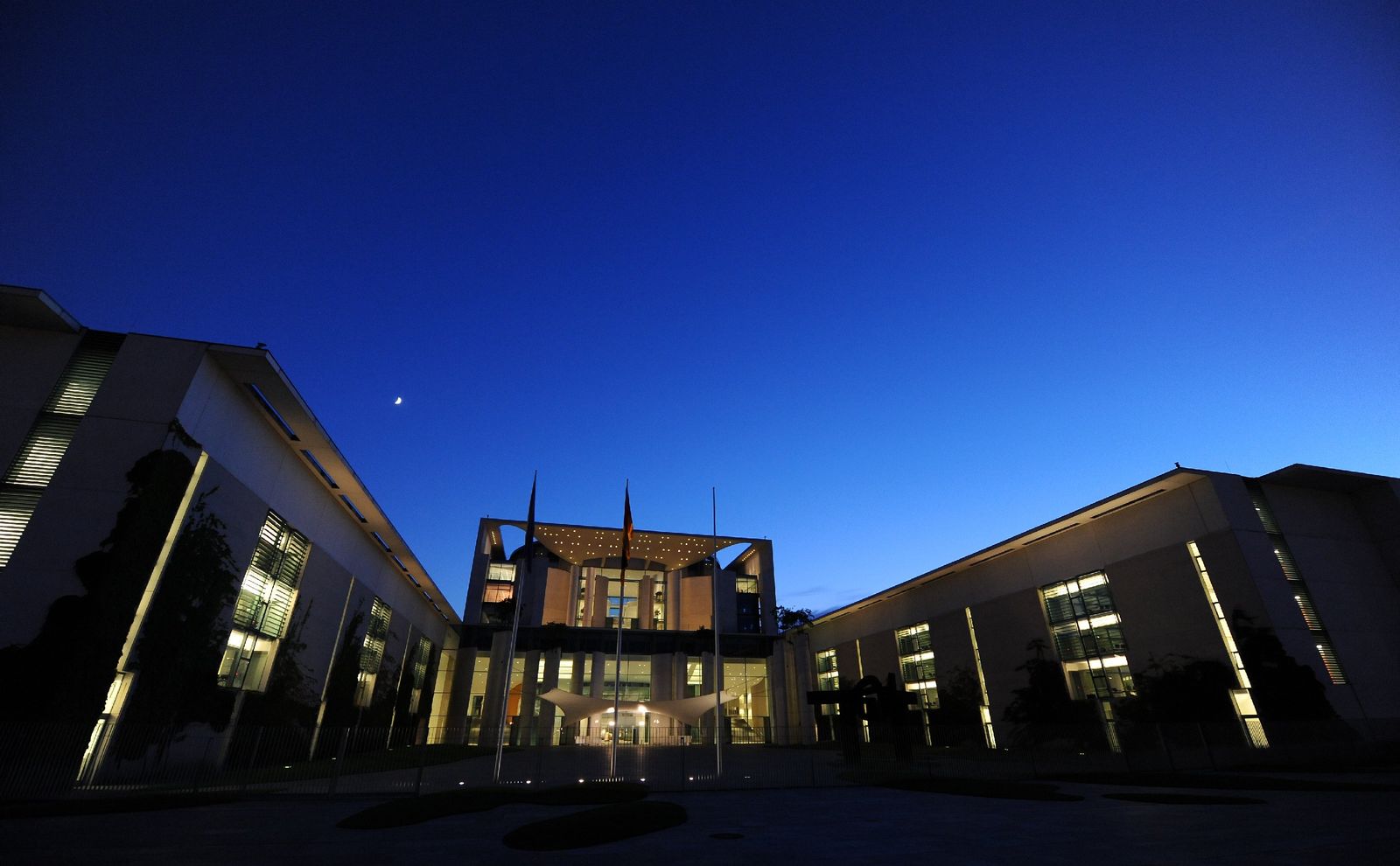 The Chancellery in Berlin: Angela Merkel and Finance Minister Wolfgang Schäuble are trying to plug the gaps in Germany's budget.