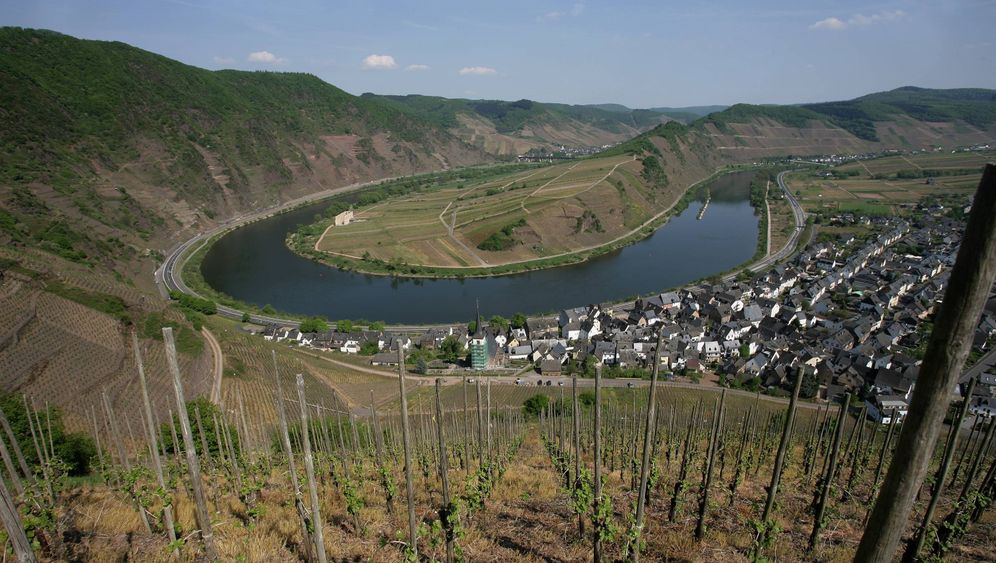 Photo Gallery: The Planned Bridge over the Moselle River

Standing at the entrance to an old villa built of solid, dark stone, Julia Klöckner is in a rush and can't seem to find the doorbell right away. This stately house is located in the small village of Wehlen; the Moselle River (known in German as the Mosel) flows right outside its front door. The Prüm family has lived in this house for 100 years, and it has grown wine here in the central part of the Mosel wine region for much longer.

Klöckner was visiting the house on a recent afternoon. The 38-year-old is the leading candidate for the center-right Christian Democratic Union (CDU) in the parliamentary elections scheduled for March 27 in the southwestern German state of Rhineland-Palatinate. Later that same day, she would make a campaign appearance in nearby Wittlich with German Chancellor Angela Merkel. But Klöckner first needed to tackle a thorny issue here by the Moselle, where half a dozen top winemakers and a couple members of a citizens' initiative had gathered.

The mood in the dining room is tense, and the oval table is strewn with documents. The issue at hand is wine, something Klöckner knows about herself. The politician grew up in a winemaking family not far from here, and she was even Germany's "wine queen" once, which made her an official representative of the country's wine regions. But, these days, what's more important to Klöckner is her possible future position as governor of Rhineland-Palatinate. The race against incumbent Kurt Beck, the former leader of the center-left Social Democratic Party (SPD), is a close one -- and every vote counts.

The vintners gathered here are usually among the conservative CDU's staunchest supporters. Take Thomas Loosen, for example; his father and grandfather were both Christian Democratic representatives in the state parliament. Others, like Willi Schaefer and Ernst-Josef Kees, are CDU supporters.

Even so, nothing about the upcoming election is certain. The angry vintners form the core of a diverse coalition of individuals who want to block the construction of an enormous bridge over the Moselle. For a while, the opposition movement seemed to be losing steam, but now the winegrowers are sounding the alarm louder than ever because they believe this election campaign might be their last chance.

The SPD and CDU are both on the other side of the battle. No matter how heated the race between Germany's two largest parties might get, they at least see eye to eye on the bridge issue. "Everyone knows the Moselle crossing is absolutely necessary," Beck says, and Klöckner seems to agree with him.

The Moselle bridge issue is unfolding somewhat like the highly controversial Stuttgart 21 project, a massive urban development project in the southwestern city that involves moving its main railway station underground. In both cases, the protest movements haven't quieted down even though the politicians have made their final decisions.

The situation is vexing to those in power, and they're trying to defuse the protests. Klöckner isn't the only one attempting to appease the vintners; Beck's Transportation and Winegrowing Minister Hendrik Hering, a fellow SPD member, has also visited the Prüm home twice.

Both the CDU and the SPD would prefer to ignore the issue altogether, but they've learned from Stuttgart 21 that large, controversial construction projects can cost votes -- ones that usually migrate to the Green Party. Here, as in Stuttgart, the environmental party is the one harnessing the rage felt by the bridge project's opponents.

A Towering Threat to Winegrowers

On the rocky spur above the river, at the point where the Moselle makes its sharpest bend along its way to meet the Rhine, it's possible to get a sense of what this massive construction project will mean for the surrounding countryside. Construction equipment is already at work, clearing and digging along the narrow ridge, past the ruin of a Roman temple and directly through Napoleonic-era earthworks. This slope will soon be home to a factory for casting bridge sections.

These sections will then stretch north from the Hunsrück mountain range over the Moselle and toward the Eifel mountain range. When it is completed, the bridge will be 160 meters (525 feet) high at its highest point and 1.7 kilometers (1.1 miles) long.

Opponents of the project consider it an outrage to ruin the Moselle river valley landscape at one of its most beautiful spots. They also believe the highway will jeopardize the water supply for vineyards on the slopes, which produce unique Rieslings with famous names, such as Wehlener Sonnenuhr and Graacher Himmelreich.

The Politicians vs. the Wine Lovers

Back in the Prüms' dining room, Klöckner is sitting and enjoying one of these high-end wines, a 2003 Bernkasteler Badstube Spätlese. The wine is truly exquisite, Klöckner says. She seems well-informed about the issue and jots down some notes during the conversation. "I understand your situation," she repeatedly says. She promises to look into some specific issues, but her basic message remains the same: It's too late to stop the bridge's construction.

During his visits, Transport and Winemaking Minister Hering also always expressed his sympathy for the winemakers and their concerns. But he also didn't budge from a position that more or less communicated the message: "It's too late, so stop complaining." Three quarters of the estimated €330 million ($455 million) in construction costs have already been tied to specific contracts, according to the state's transportation ministry, and the courts have consistently ruled in favor of the project's proponents. Backing out now would mean huge contractual penalties.

Famous wine critics, such as Britain's Hugh Johnson, seize every possible opportunity to call for the bridge project to be blocked. Last year, Johnson and several colleagues met with Moselle vintners and Green Party members, including former Vice Chancellor and Foreign Minister Joschka Fischer, for a " protest tasting" at a Chinese restaurant in Berlin that aimed to draw political attention at the federal level to the scandal happening out in the countryside at the opposite end of the country.

When Johnson rages against the bridge, he doesn't hold back on the emotion. "For those of us abroad, the Mosel is the most precious of all Riesling birthplaces," he recently wrote in Der Feinschmecker, a leading German food magazine. Meanwhile, vintners from the Mosel have been reporting that whenever they take business trips, wine lovers around the world share their worries about the future of the Moselle River Valley.

Both the SPD and CDU are locking horns with the wine lovers of the world when they try to foster resentments among residents in this rural corner of Germany. Governor Beck says that the only ones campaigning against the bridge are "a bunch of political snobs." Hering, his minister for winemaking, boasts that the bridge proponents have "90 percent of the (region's) population behind us."

Alexander Licht, the CDU politician who represents the area in the state parliament, has gone so far as to suggest that the vintners are only responding to pressure from foreign wine critics. Anyone who is truly concerned about the future, he says, supports the bridge because it will surmount the "Moselle barrier" and better connect the isolated Eifel-Hunsrück region to Germany's ports on the North Sea and to the Rhine-Main region.

"We will exhaust every political avenue we have to prevent the construction of the Moselle bridge" is one of the campaign pledges of the Green Party. Renate Künast, the Greens' national leader, says this joint protest with the conservative vintners shows that there's "room for the Green Party in mainstream society." Eveline Lemke, the Greens' leading candidate in Rhineland-Palatinate, adds that: "On this issue, we follow conservative values."

Many of the winemakers seem to see things the same way. Manfred Prüm, for example, says he usually doesn't vote green, but "for the first time in decades, I'm giving renewed thought to how I'll vote." Fellow vintner Thomas Loosen even believes that his entire family is going to vote green.

In voting for the Greens, the winegrowers are thinking strategically. At the moment, it looks like neither Beck nor Klöckner will be able to secure the votes they need to govern alone. If either the SPD or the CDU wants to obtain a majority by forming a coalition with the Greens, it will allow the latter party to be a kingmaker that can exert more influence in the wake of the election.

In the event that she needs the Greens' help, Klöckner is already "greening" her election promises. She admits to the Prüms that citizens weren't given enough say in the decision-making surrounding the Moselle bridge. If she becomes governor, she promises to make the process more accessible. In other words, if she's in charge, things will be done differently -- or at least the next time the region has plans to build a massive bridge.