With France and Germany preparing to host the summit of the North Atlantic Treaty Organization (NATO) at the beginning of April, extensive security measures are being prepared to protect the leaders of the 26 member states. 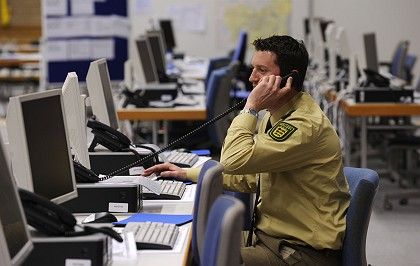 A German police officer in the operation center for the NATO summit.

The south-western German cities of Kehl and Baden-Baden and the French city of Strasbourg are co-hosting the gathering which will mark the 60th anniversary of the alliance. An estimated 15,000 police officers are to be deployed on the German side alone and the German army, the Bundeswehr, is supporting the security operation with interceptor planes, transport helicopters, paramedics, motorcycle escorts as well as buses and other vehicles. However, the local police force in the state of Baden-Württemberg have not asked the Defense Ministry in Berlin to provide scout tanks or Tornado reconnaissance jets, whose deployment caused such controversy during the G-8 meeting in the Baltic Sea resort of Heligendamm two years ago. While the jets were supposed to keep an eye out for signs of a possible terrorist attack it later emerged that they had also been employed to spy on a camp of anti-globalization protestors.

Alexander Bonde, a Green Party member of the German parliament, has described the security measures planned for Kehl as "completely absurd" and branded the gathering a "summit of impertinence." He says that hundreds of citizens will be living under "quasi house arrest" in the area around a pedestrian bridge that crosses the Rhine -- the location of a group picture of the NATO heads of state. Local residents living nearby will not be allowed to leave their homes between the Friday and the Saturday morning without a police escort and even that is only allowed in urgent cases and with prior consent. "Even for probably the most costly photograph in history," says Bonde, "this expense is completely excessive."

The photo-op, which will take place as the summit guests are transported across the border from Baden-Baden to Strasbourg, is scheduled to last 10 minutes. During that time all traffic on the motorways and streets nearby will be brought to a standstill while shipping on the Rhine will also be halted for several hours.

That is not the only disruption the NATO meeting is due to cause to the lives of local people. In order to ensure that enough police officers are available for the operation all the soccer league matches that had been scheduled to take place in the state of Baden-Württemberg on April 3 and 4 will now have to be postponed.