"Google Discloses Demands for Censorship, User Data," read the Associated Press headline on a story about an unusual bit of transparency on the Internet. Google has now begun to publish information about censorship and data requests that it receives from governments. From a German perspective, the results, which were released on Google's website Tuesday, are shocking.

In regard to what the AP terms "censorship," Germany is the world's No. 2 in the Google rankings, way ahead of its European neighbors. Germany made more removal requests between July 1 and Dec. 31, 2009 than the rest of the continent put together. Apart from Germany, the only other European countries that made a significant number of requests in the same period were Italy, Spain and Britain.

But what is considered censorship in the US is not necessarily the same as what Europeans understand the word to mean. For one thing, Google's numbers are incomplete, as the company itself admits. Additionally, they are lumping together things that do not belong together under their blanket term "removal requests."

According to Google, unspecified German authorities required the US-based search engine giant to erase or block online content 188 times between July and December. Only Brazil demanded more than that, issuing 291 requests, according to Google's statistics.

Why, however, is China, a country that is notorious for censoring the Internet, missing from these lists? The company could not release details about China's requests because that information is classified as a state secret, Google said.

Google itself reported that it considered the majority of the German requests to be legitimate. A total of 94 percent of all requests from Germany were entirely or partially granted by Google. That's not the case in every country, Google spokesman Kay Oberbeck told SPIEGEL ONLINE, adding that statistics about countries that issue a lot of removal requests, but where few of those requests are granted, are more interesting. Overall, the data from different countries were "difficult to compare," Oberbeck said.

Google only revealed limited information about the nature of Germany's removal requests:

Why are there so many German removal requests involving Google searches? Oberbeck explained the requests are often related to defamation, but frequently requests are made to block the sites of neo-Nazis and Holocaust deniers featuring content that is illegal in Germany. Germany has much more far-reaching prohibitions regarding these issues than other European countries. Not only Google, but all Internet providers follow these rules in Germany, Oberbeck said.

Google also complies with the lists compiled by Germany's Federal Department for Media Harmful to Young Persons (BPjM), whose requests to Google were included in the statistics. The BPjM, which is tasked with protecting children and adolescents in Germany from any media which might contain harmful or dangerous contents, compiles lists of publications and media products that include indecent, extremely violent, crime-inducing, anti-Semitic or otherwise racist content. In general, however, Germany's Internet providers take action by themselves to block such content.

Most video content removal requests coming from Germany were not related to copyright violations, as one might think, said Oberbeck, but had more to do with slander, illegal content and violations of terms and conditions, which had been brought to Google's attention. Copyright issues were normally settled directly with the copyright owners, Oberbeck said.

Nevertheless, many people in the US believe that Germany is censoring the Internet. They regard any form of intervention in online content as censorship. Radical advocates of free speech even defend terrorism-related content or child pornography as legitimate expressions of opinion.

Google, however, is aware that clearer distinctions between censorship and legitimate removal of content will need to be made in the future. From now on, Google plans to release the government request lists every six months. Oberbeck said that the information will become more detailed, differentiated and transparent, something that Google is currently working on.

The company hopes that their new feature will be an example to others. Data from the OpenNet Initiative shows that the number of governments censoring the Internet has increased from four in 2002 to 40 in 2009. Raising awareness of that fact is worthwhile in itself, Oberbeck said, adding that Google hopes other companies will follow suit and release their data. 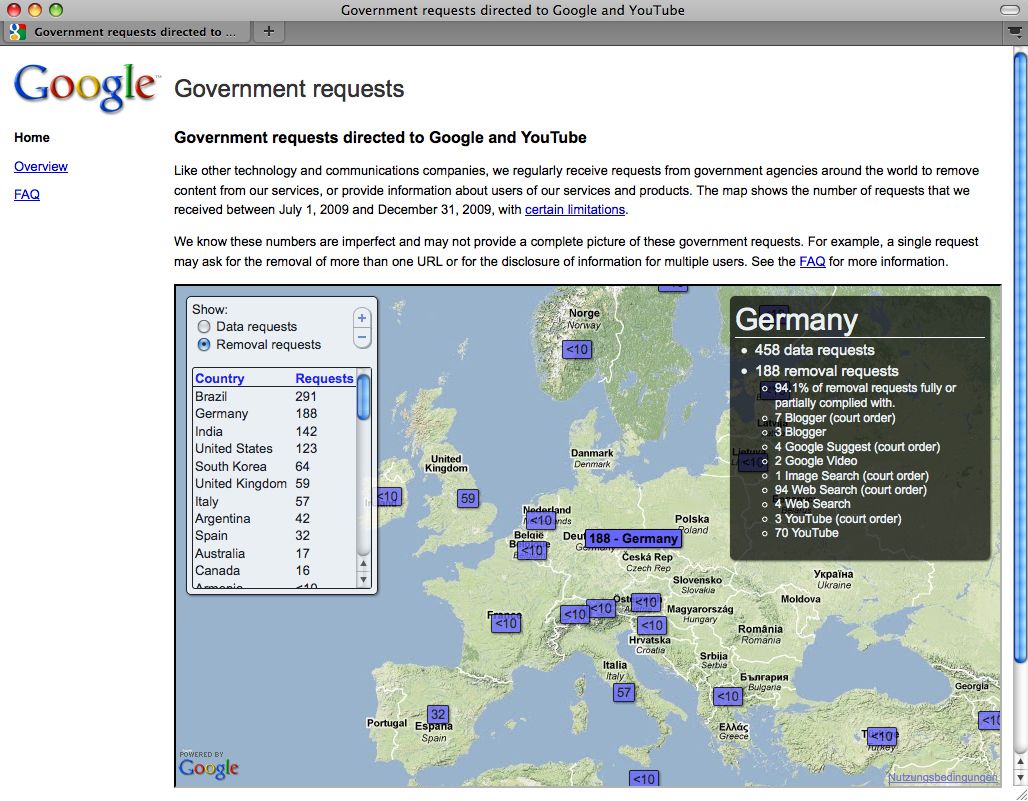