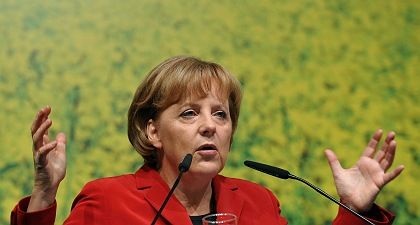 German Chancellor Angela Merkel has managed to develop quite a reputation on the international stage for her efforts to combat climate change. Back home in Germany, however, important pieces of her climate protection package threaten to fall through.

On Friday, with just days to go before the cabinet planned to approve a second package of environmental laws, the item was suddenly removed from the Tuesday agenda. It now won't be considered by the Merkel government until the middle of June. And on Saturday, a number of dailies indicate that the problems facing the proposed measures are many.

Perhaps most serious are disagreements regarding a proposal to base automobile registration and tax fees on vehicle CO2 emissions instead of, as has been the practice until now, on engine size. Such a change was agreed upon last December, when the government pushed through its first major package of laws aimed at reducing German CO2 emissions.

The Economics Ministry under Michael Glos made it clear that the goal must be that of "preventing higher taxes on automobiles" in Germany. The point of the law was to provide a financial incentive for Germans to buy cars that emit less greenhouse gases.

Disagreement, however, is also rampant when it comes to rules relating to the remodelling of buildings and the expansion of Germany's power line network. A proposal to tie truck tolls to the amount of CO2 emitted by the vehicles has also run into difficulties.

Merkel's government has committed to reducing Germany's greenhouse gas emissions by 40 percent relative to 1990 levels by 2020. Last December, her cabinet approved a package of laws, representing a €3.3 billion ($5.2 billion) commitment, designed to encourage businesses to conserve energy and to expand Germany's reliance on renewable energy sources.

A recent study commissioned by the Green Party, however, has found that Merkel's goals could be unrealistic. The study warned that a reduction of just 28 percent is achievable.