Guests at the four-star Hotel Stadt Hameln can pay €44 ($62) to be treated like a prisoner for four hours. The price includes black and white striped prison T-shirts and a prison menu, served under the watchful eyes of pretend guards wielding fake batons. Those who need to use the restroom must register their request while standing at attention.

The hotel, according to its marketers, has a "unique history." Unique, yes. But harmless, no.

The building, located in Hameln, a city in northern Germany famous for the Pied Piper of Hamelin legend, was built as a jail in 1827. The Nazis took it over in 1935. A local historian named Bernhard Gelderblom says 474 people died in the prison. And, according to the 68-year-old historian, that number continues to grow. Gelderblom has been researching the building since 1985 and has published his findings on his website about the history of the city.

Towards the end of World War II, Gelderblom says, prisoners at the site died from overwork, overcrowding, hunger, cold, and a lack of medical care. In some cases, they were "shot while fleeing" or "publicly hanged." After the war, the prison was used by the British occupiers as a site for executions.

In 1986, the cell block and east and west wings of the prison were torn down. The rest of the building remained under monument protection. In 1992, the city sold it for the symbolic price of one Deutschemark. The hotel opened in August 1993.

"Having the hotel at this site was the political will of the city of Hameln," says managing director Gabriele Güse.

No Mention of the Nazi Past

The troubled history of the building is glossed over on the hotel's homepage, which says only that the prison cellar is "modelled after the former Prussian prison that was located behind our historic walls from 1827 until World War II."

On the hotel's website, the section marked "history" offers no clues to the findings about the building's Nazi past. The timeframe between the end of the 19th century and 1978, when the last prisoner was moved out, is handled with the sentence: "The building served as a prison for more than 150 years."

Prison parties in a former Nazi jail? Gelderblom finds it "grotesque." He says he has complained about it again and again, sometimes in lectures. He has made contact with the relatives of former prisoners. He says they are "appalled and consider it tasteless."

The management of the hotel does not find the prison parties objectionable. "We do not think we are damaging anyone or hurting anyone with our hotel," says managing director Güse. There will always be people who object to what others do, she says.

Why is there no mention of the Nazi period on the hotel's homepage? "I do not wish to comment on that," Güse says. What would she say to those who find the parties "inappropriate" and "tasteless"? Güse refrains from commenting on that too.

'I Thought It Was a Joke'

Maurice Born cannot understand that at all. The retired professor, a Frenchman, has researched Hameln's history for many years. He first visited the city in 1964, and has returned 20 times since then. Like Gelderblom, the 68-year-old studied the Nazi history of Hameln. Last September he saw the ads for the "prison parties."

"I simply could not believe it," says Born. "I thought it was a joke." He says he was "disgusted and disappointed."

Born wrote a letter to the hotel, to Mayor Susanne Lippmann, and to city politicians, and he showed SPIEGEL ONLINE the six-page document. In it, Born summarized the history of the prison, and came to the conclusion that the prison parties were a "grotesque masquerade," and the historical summary on the hotel's website was "extremely one-sided." The prison parties, in his opinion, were a "damaging misuse of a historically-charged site."

The letter was dated Oct. 14, 2010. To date, Born has not received any answer. Güse, the hotel's managing director, says she can remember the letter. "We always keep such communications," she says. She does not want to comment on why it has not been answered.

In a written response to questions, Güse says the prison parties never made any reference "to the history of the building quoted by Mr. Born." The parties, she says, are comparable with "knights' banquets" offered elsewhere.

Hameln's city spokesman, Thomas Wahmes, says that Mayor Lippmann asked him to answer Born's letter. He says he did not get to it because of time constraints and he regrets the delay. Wahmes distances himself from the hotel's events. "We can understand Mr. Born and his concerns very well," he says. The hotel can do what it thinks is right, he says, but "when one knows what took place there, it is naturally tasteless." Lippmann reportedly thinks the same.

On May 8, 2006, Hameln dedicated a plaque to the former prisoners of the Nazis. A representative of the city said at the unveiling of the plaque that one should be ashamed of "what was done here to innocent people." The representative said Nazi terror was the "cruel daily life" in Hameln, and hundreds of prisoners died. Thanks to Gelderblom's efforts, light had been brought into the tunnel.

"That shows that we take remembering seriously," says spokesman Wahmes. But it wasn't that simple. Gelderblom says that he had to work "for years" to convince them before the plaque was put up. And it is located on city property, not on the hotel grounds. 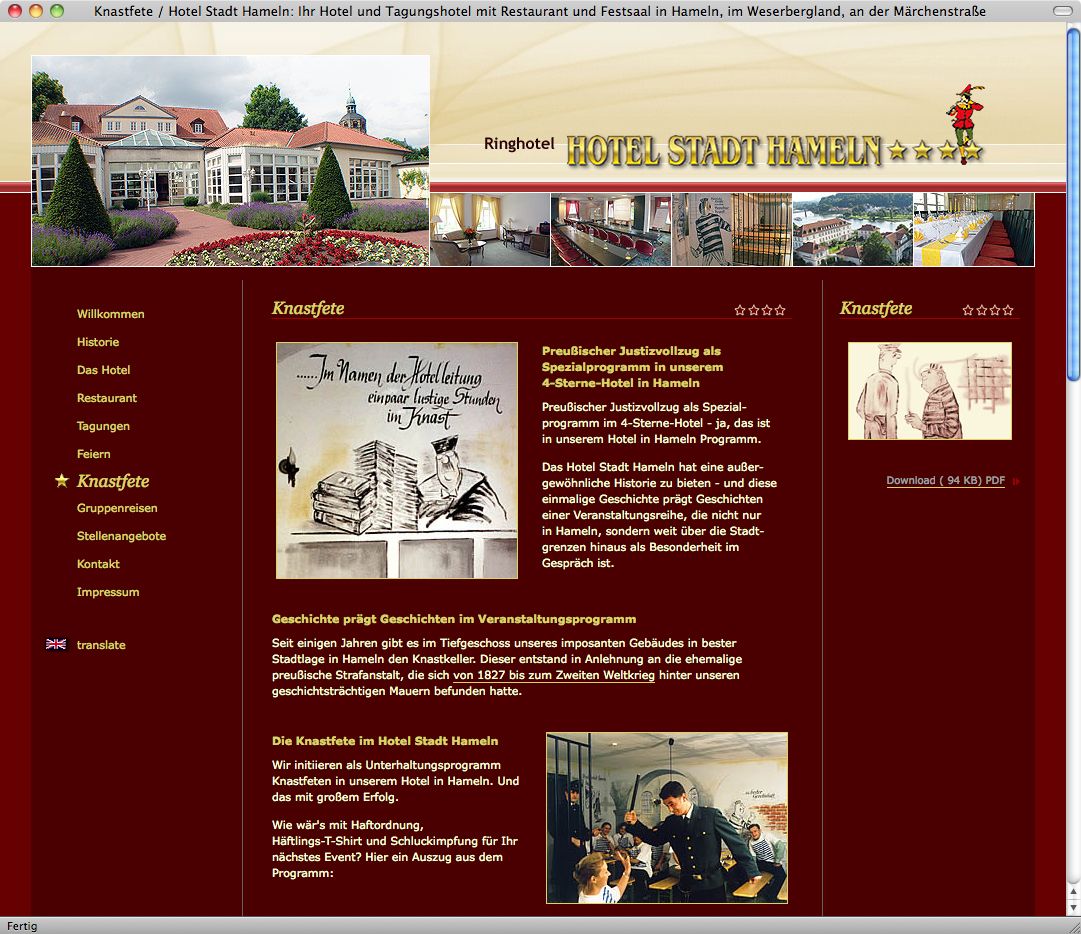 "Prison Parties" are a selling point for a German hotel in a former Nazi jail.