There was that incident with the condoms. Green member of German parliament Volker Beck received one, and so did fellow Green Party member Konstantin von Notz. They were accompanied by friendly greetings from the Young National Democrats, the youth wing of the National Democratic Party (NPD): "For foreigners and select Germans," it said on the packaging.

There was also a letter containing the right-wingers' normal propaganda, which in the case of Volker Beck, meant accusing his politics of not being in the "best interest of the German people." The Young National Democrats sent and distributed about 5,000 condoms during the 2013 German election, not only to politicians but also citizens who had immigrated to Germany. Beck condemns the action, saying it's based on "racial biological thinking similar to the Nazi ideology of the Third Reich."

The Federal and State Working Group, which is exploring a possible ban of the NPD, clearly feels the same way. In the middle of October, it decided to include the prophylactic-mailing campaign as further evidence of party functionaries' racist activities. That and the recent ruckus in Berlin's Hellersdorf district, where a mob under the leadership of NPD members agitated against a planned home for refugees.

The representatives of Germany's federal states will need about a year to make up their minds about the contents of the motion. Now the third and presumably last version is to be presented on Dec. 4, in Osnabrück, to the Interior Ministers' Conference and will arrive this week, at the latest, at the Federal Constitutional Court.

At the moment, the proceedings are the queasiest undertaking in German domestic politics. If the process is successful, it will be the first time in over a half-century that a political party has been banned in the country. The NPD would be kicked out of the German state parliaments in Mecklenburg-Western Pomerania and Saxony.

The motion by the German states has three main points of emphasis, the first of which is the role of so-called "confidantes," informers working for the police and intelligence service. In 2003, then Federal Minister of the Interior Otto Schily (SPD) failed to make his case at the Federal Constitutional Court in Karlsruhe in the first attempt to ban the party because it turned out the leadership level of the NPD had been infiltrated by intelligence service informants.

In order to prevent a repeat, the federal government and states decided in the spring of 2012 to deactivate their approximately 20 informers in the top levels of the right-wing party. The states' most senior representatives, lawyers Christoph Möllers and Christian Waldhoff of Berlin's Humboldt University, emphasize that the authorities no longer have any direct influence over the leadership of the NPD.

The more-than-1,000-page supporting collection of documents was revised several times. At first, the collected quotes, speeches and Internet posts were sorted into various categories independent of whether the information had come from confidantes. Now only information guaranteed not to have been obtained through intelligence service sources can remain part of the documentation. In order to increase the credibility of the motion, the interior ministers also agreed to provide a signature guaranteeing the material does not include any information provided by informers. But what happens if, during the trial, someone stands up and outs him or herself as an informer? Or takes credit for writing some crucial evidence?

The second focus of the ban initiative includes documents meant to prove the NPD's "aggressive and combative attitude." Among them is a transcript of a speech given by the party's group leader in the state of Mecklenburg-Western Pomerania's parliament, Udo Pastörs, in 2009 in Saarbrücken. "We want maximum damage to this particracy," he said.

The third focus is a legal argument: Why an NPD ban is proportionate and complies with the principles of the European court of Human Rights in Strasbourg. The legal counsel refer to the "historic decision of the Basic Law for a defensive democracy in response to the catastrophe of National Socialism," the Basic Law being Germany's constitution. And this should apply regardless of whether the party garners support of just 1.5 percent on a national level as it did in this year's federal elections, according to the Basic Law.

But Berlin remains skeptical that these arguments will convince the Constitutional Court. During recent negotiations to build a coalition government with Chancellor Angela Merkel's conservatives following the election, two state interior ministers who are members of the center-left Social Democrats (SPD), Boris Pistorius from Lower Saxony and Ralf Jäger from North Rhine-Westphalia, suggested the coalition approve the initiative. The party's parliamentary group also supports this idea.

But conservative Interior Minister Hans-Peter Friedrich blocked this idea. "We aren't doing it. The states will have to lose on their own," he said, according to a number of participants. This reportedly annoyed Jäger, who pointed out statements to the contrary made by Friedrich in the past. Friedrich declined to comment on the dispute upon request, saying that he would "endeavor to support" the process, which doesn't sound like a euphoric endorsement. Still, the SPD state interior ministers seem confident. "In view of the collected material we are optimistic," Pistorius said. 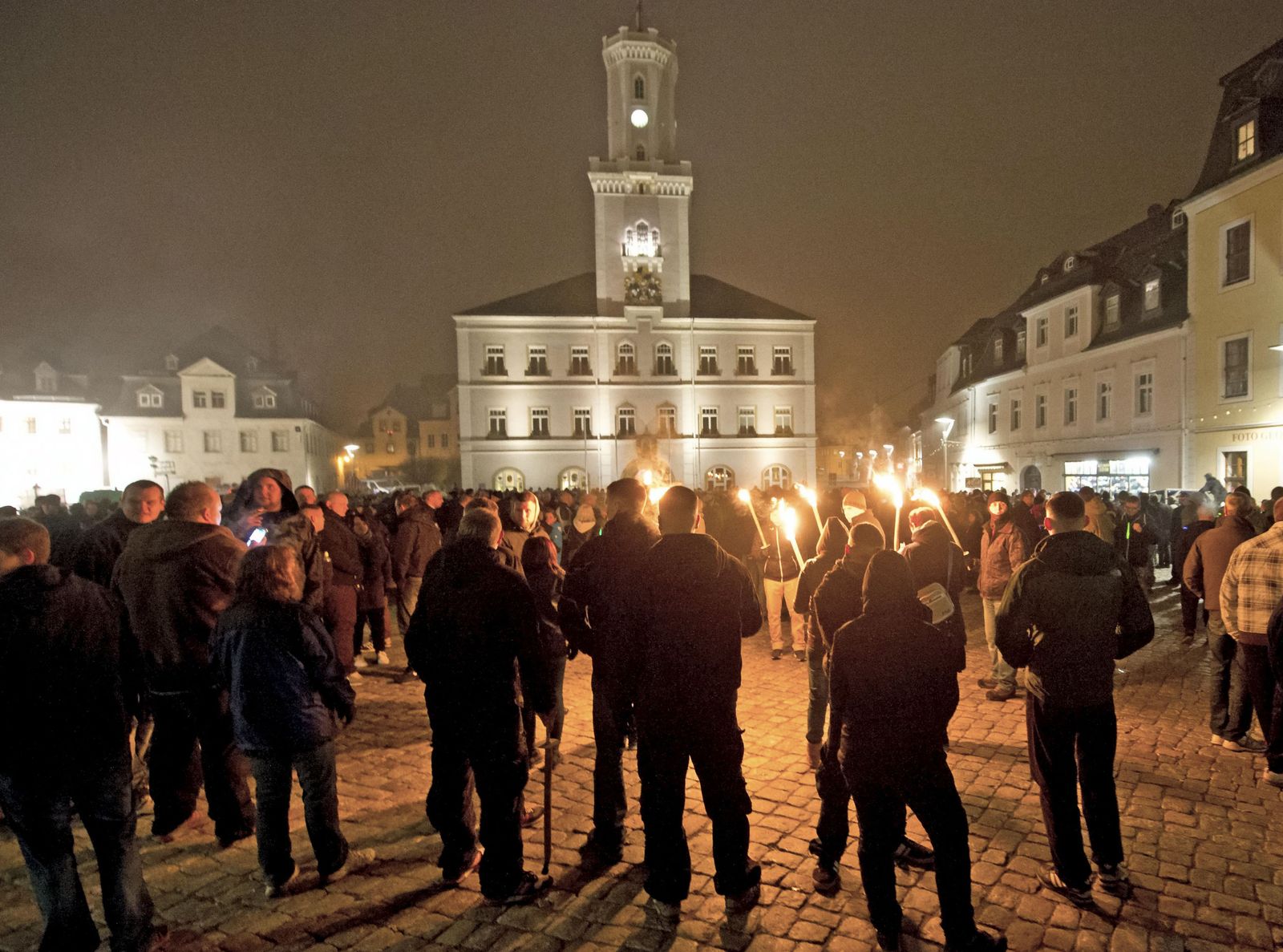 NPD supporters rally with torches during a demonstration against a refugee home in the eastern German town of Schneeberg. A new attempt to ban the party will soon make its way to the German Constitutional Court.