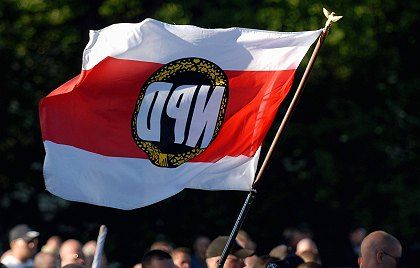 The NPD is more popular than the SPD in Saxony.

That Germany's Social Democrats (SPD) are in free fall is nothing new. The center-left party, despite being Angela Merkel's coalition partner in Berlin, is overshadowed by the popularity of the chancellor. SPD leader Kurt Beck is unpopular and has a hard time even keeping his own party in line. And party membership is lower than it has been in half a century.

But on Thursday, the party hit a new low. A survey in the eastern German state of Saxony shows that, were voters to head to the polls on Sunday, more people in the state would mark the box next to the neo-Nazi party National Democratic Party (NPD) than would vote for the center-left SPD. The poll, carried out by Forsa, has 9 percent of those surveyed supporting the NPD with just 8 percent for the SPD.

The NPD celebrated the result in a press release, calling the numbers "really sensational." The poll comes just three weeks after Saxony was in the news after a xenophobic mob chased eight Indians through the town of Mügeln shouting "Foreigners Out!" before beating them up. The NPD on Thursday said the most recent poll is a result of the fact "that we didn't join the media-driven witch hunt against our own countrymen as happened in Mügeln." The press release also said the coverage of the Mügeln attack was "racist" and ended with the words: "Don't worry, the next elections are coming for sure."

The SPD, for its part, is shocked at the result. The party only managed 9.8 percent in Saxony in the last election -- which saw the NPD enter state parliament with 9.2 percent. But being behind the NPD is the clearest indication yet that the party hasn't managed to establish itself in former East Germany. The conservative Christian Democrats came in at 39 percent in the poll while the left-wing Left Party got 27 percent.

Fingers, though, were also pointed at the polling agency itself. Previous polls from other institutes consistently showed the NPD well behind the SPD, although the neo-Nazis have been making recent gains.

Nationwide, the picture isn't nearly as dark for the Social Democrats, but still a cause for concern. In general elections, the party would get 27 percent of the vote against 39 percent for the Christian Democrats, according to polling data publicized by public television on Thursday. Were Germans allowed to vote directly for their chancellor, CDU boss Angela Merkel would get 60 percent of the vote with SPD head Kurt Beck only managing 19 percent.

The Saxony poll comes despite nationwide shock at the August incident in Mügeln. A group of at least 50 right-wingers chased the eight Indians through the entire town. They tried to take shelter in a pizzeria, but the mob broke down the door and the windows. The incident led for a new call in Germany to ban the NPD party. The proposal is controversial, however, due to a failed attempt to ban the party in 2003. Many are concerned that, should a ban fail again, the NPD would be strengthened.