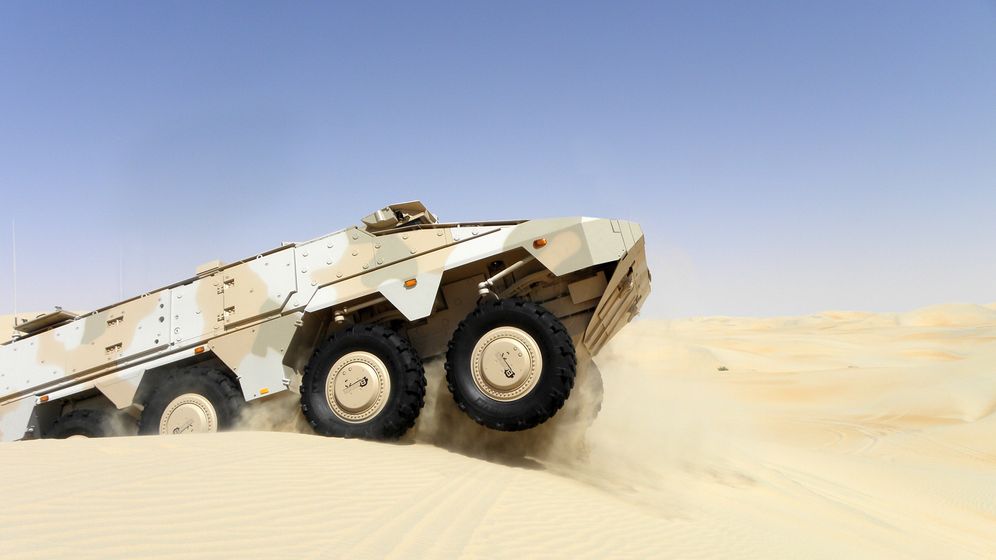 Russian television aired a very special premier in September. In an "exclusive special report," the pro-Kremlin private broadcaster Ren TV praised the advantages of the German "Boxer" armored personnel carrier, including a diverse array of deployment possibilities, 600 shots per minute and computer-controlled tire pressure. The soldiers, an impressed anchorman said, "remain unharmed, even if the vehicle drives over an anti-tank mine." The German defense industry couldn't have made a more appealing promotional film.

The Russians aren't the only ones interested in the armored vehicle, which is made in a joint venture between two German arms manufacturers, Rheinmetall and Krauss-Maffei Wegmann. The "Boxer" could become the next top-selling export item for the German defense industry. Military officials around the world are showing interest in the vehicle, with its diverse range of applications. The "Boxer" was also given top scores in a British performance test.

Unfortunately, and this is where the problems begin for German politicians, the interested parties include a number of authoritarian regimes. Since SPIEGEL reported last week that the fundamentalist government in Saudi Arabia wants to buy several hundred "Boxers," a full-scale debate has erupted over the business ventures surrounding Germany's miracle military vehicle. Using informal channels, Moscow has cautiously inquired whether the Germans would approach exporting them to Russia. The government of the United Arab Emirates, also no model of democracy, would like to buy the Boxer for its army too. But should German firms truly be selling weapons to these countries?

In the case of the Emirates, the German government seems likely to approve a sale. The "Boxer" was first tested in the Emirates in September 2010. The next trial was scheduled for the summer of 2011, this time under desert conditions. The German government issued a temporary export permit for these tests. "You wouldn't do this sort of thing if you were ruling out a sale," says a government official. And why should armored vehicles be sold to the Saudis but not to their somewhat more liberal neighbors?

The situation would be a little more delicate in Russia's case. On the one hand, the country is one of Germany's strategic partners. Besides, those sympathetic with Russia are shaping policy at the German Foreign Ministry. In the past, Foreign Minister Guido Westerwelle had consistently advocated arms cooperation with the Russians, at least within the Foreign Ministry.

But there would be something new about the sale of "Boxer" vehicles. The fast armored vehicle is well suited to combating uprisings in urban areas. Besides, many in the German government still haven't forgotten the shock triggered by Russia's invasion of Georgia, at the behest of Russian President Vladimir Putin. Some worry that the Russian army could invade another country with German weapons.

The Federal Security Council hasn't had to deal with the issue yet, because Berlin has not received an official inquiry from Russia. It is clear, however, that Chancellor Angela Merkel would address such issues behind closed doors, as usual. But now growing numbers of lawmakers are asking themselves why they are not involved in important debates and decisions on security policy. The Federal Security Council meets in secret, and it often takes years before the consequences of its decisions become apparent in the arms export report. By then it's generally too late to change anything.

"Citizens have a justified interest in being informed earlier on about arms sales," says Markus Löning, the German government's human rights commissioner and a member of Merkel's junior coalition partners the pro-business Free Democratic Party (FDP). "It would make sense to publish the arms export report not long after the decisions are made by the Security Council, even more than once a year, if necessary."

Other coalition politicians are also unwilling to accept the fact that the government is excluding the parliament from consultations over concrete export plans. Foreign policy expert of the FDP, Bijan Sjir-Sarai, wants to launch an initiative with fellow lawmakers from other parliamentary groups during this legislative period, so that the federal parliament, the Bundestag, is given enough time to have a say in arms sales. Rolf Mützenich, a member of parliament for the center-left Social Democratic Party (SPD), also supports the plan.

Djir-Sarai argues for the creation of Bundestag committee that would meet in secret, like the one that exists to monitor the intelligence services. One of the politicians who support Djir-Sarai's proposal is Ruprecht Polenz, the chairman of the Foreign Policy Committee. "There wasn't much interest in this idea a few months ago," says Djir-Sarai. But he believes that this has now changed. "It cannot be that the parliament is not involved at all in decisions of such great significance."