Pass the Porsche Museum in Stuttgart and continue across Porsche Square, you'll come to a factory gate. Behind it stands a barrack, its wooden slats still bearing the faded lettering "Reutter" -- a company which once provided Porsche with its first car bodies.

"This is where it all began in 1950," declares company historian Dieter Landenberger. Yet Porsche's history is older -- and bitterer -- than that. 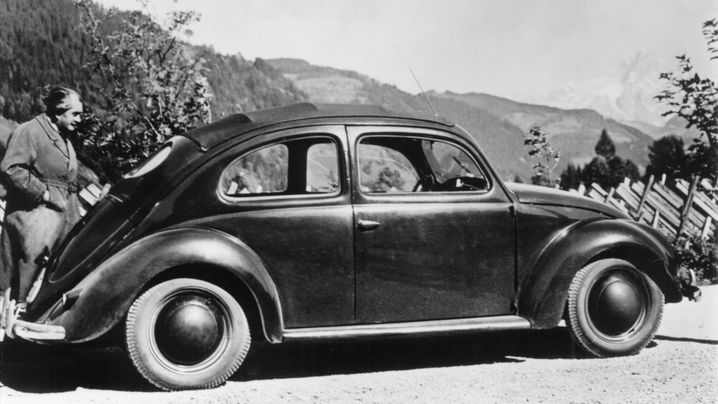 Jan Karolczak, for example, worked for the automobile manufacturer starting in 1942 -- as a forced laborer.

At the time, Porsche was not manufacturing sports cars, just tanks and off-road military vehicles. Karolczak had lived in the occupied Polish city of Krotoszyn, but in February 1942 he received an order from the German employment office assigning him for work. He was 21 at the time. "I wasn't exactly overjoyed to get the letter," says Karolczak, now 88. What followed was several days' odyssey through Germany, ending with a middle ear infection and arrival at Porsche together with 20 other Polish workers.

Karolczak slept in a drafty, dirty building near the factory, and spent his days assembling crankshafts. The company was focusing its efforts on creating a war-ready version of the Volkswagen, created by Ferdinand Porsche, who died in 1951 and also designed many Porsche models.

The company paid Karolczak 150 reichsmarks a month for his efforts, but withdrew income tax, health insurance, and even a charge for the food that Karolczak describes as "meager." In the end, he says, "I was left with 60 marks."

Personnel managers were also painfully exacting in making sure the workers wore the letter "P" on their clothing at all times. It stood not for "Porsche," but for "Poland." Stigmatized in this way, Polish workers were unlikely to be admitted into movie theaters or even air raid shelters.

To this day, Porsche hasn't confronted this portion of its history. Unlike the Volkswagen Group, which allowed an investigation of forced labor in 1996 that produced a document of more than a thousand pages, Porsche preferred to keep its silence on the subject.

Instead, the major sports car manufacturer tried to make its role appear much more insignificant. It was only a small engineering office during the war, the company claimed, with 50 to 100 employees. Just a glance into the company's own archives, however would have been enough to dispel that myth -- one graphic, from 1944, shows 656 employees. And it was routine for companies of this size to use forced laborers. Porsche, though, has always denied that fact.

Taking the Porsche Legend to Task

When a Polish man went to court to demand reparations in the late 90's, at first the German car company didn't want to pay at all. Later, it offered 10,000 marks to any person who could prove a case of forced labor. While Porsche was innocently estimating its wartime forced labor force at no more than 10 to 20, Landenberger suddenly possessed documents that laid out details like "foreigners' bathing times," including for Russian prisoners of war. Landenberger now puts the number at "50 forced laborers at most."

The most recent upward adjustment to that number is based on research done by journalist Ulrich Viehöver, who has taken the Porsche legend to task. In a new book about Stuttgart's Nazi perpetrators, he portrays Ferdinand Porsche as "an unscrupulous profiteer in the Nazi regime." Viehöver examined archival material, some of it previously unknown, and estimates the number of Porsche's forced laborers at around 300. "Some of the barracks are still standing," he adds.

The study comes at an inconvenient time, when the company in Stuttgart would rather be celebrating. Ferry, the elder Porsche's son who created the Type 1 sports car just after the war, and with it the blueprint for his company's future success, would have turned 100 last month.

Company historian Landenberger now senses that the focus of his work may be about to shift. For the last four years, he has concentrated on developing the new museum at Porsche headquarters. The current special exhibit features Ferry Porsche, and for it archivists collected Porsche's red briefcase and hunting and motorboat licenses. But in the end, an attention to devotional objects will prove not to be enough.

Landenberger has only recently begun to admit to gaps in the company history -- Viehöver's revelations are catching up with him. They concern the Stuttgart engineering office's role, which so far has received little exposure, and how the automobile dynasty was able to save the wealth it had accumulated during the war, carrying it over into the "economic miracle" that was postwar Germany.

The decisive factor in Porsche's rising star was that Adolf Hitler took a liking to Porsche -- even though Porsche was far from a fawning admirer. He was rarely known to raise his arm in the Hitler salute, and his baggy gray coat always stood out during marches, in a sea of otherwise brown uniforms. As for his SS rank, conferred by Heinrich Himmler, Porsche simply ignored it. And yet Porsche's reserve didn't damage him professionally, and he received the development monopoly for VW.

Although the civilian 990-reichsmark version of the Volkswagen remained nothing but a propaganda lie, the company began to develop military vehicles. Production took place in the Nazis' model factory in the city of Wolfsburg (where VW still has its headquarters), funded by assets looted from the unions.

Ferdinand Porsche, the company's creator and director, wasn't bothered by those details when he placed VW and Porsche in the service of the armaments industry. His biographer, Fabian Müller, writes that Porsche had thousands of people forcibly brought to work at the VW factory during the war. The workers were made to build bombs, and lived in rat-infested quarters. Porsche monopolized the Nazis for his purposes, writes Müller, "not the other way around."

Thanks to its entry into armaments production, Porsche's "small engineering office" in Stuttgart saw its profits jump from about 3,000 reichsmarks in 1934 to more than 2 million in 1944. And in Stuttgart as well as Wolfsburg, the leap wasn't achieved without the help of forced labor. Giacomo Belleri, now 90 years old, describes how he returned to his village near Brescia, Italy, after the failed military campaign in Africa, only to be arrested by uniformed Germans in early 1944. He too ended up at Porsche. Jan Karolczak remembers many other forced laborers as well -- Dutch, Moroccans, French, Italians, and even Russian women.

While Porsche was financially safe, former manager and shareholder Adolf Rosenberger became increasingly endangered. Rosenberger, of Jewish heritage, had joined the company with Ferdinand Porsche and Porsche's son-in-law Anton Piëch in 1931. He eventually fled from the Nazis to the US, where he ended up unemployed. Piëch, father of VW's current chairman of the board Ferdinand Piëch, was a staunch Nazi, but apparently had nothing against using Rosenberger's money, which "secured survival" for the company during that period, according to Landenberger.

After the war, a great deal of back and forth finally led to a settlement between Rosenberger and Ferry Porsche. Porsche had to pay Rosenberger 50,000 marks and in addition provide him with a Porsche sportscar or VW sedan until the end of 1950.

While looking for the Porsche-Piëch clan's assets, Rosenberger's lawyers stumbled across a company network still significant today. It turned out there was nothing to find at the old, confiscated parent company, nor at the new company, Porsche Konstruktionen GmbH. The family founded the latter, an empty shell almost completely without assets and later liquidated, together with Ferry's old school friend, former SS Hauptsturmführer Albert Prinzing, in order "to be able to continue working undisturbed," according to Viehöver. Meanwhile, Ferry Porsche and his sister Louise Piëch had moved a significant amount of assets to safety in Austria, allowing the clan a new start without any obstacles in its path.

Jan Karolczak, who received compensation from Porsche a few years ago, recalls an incident that reveals a great deal about the company's attitude. During air strikes, he and other forced laborers were ordered to stay in the factory, to be on hand in case fires needed to be put out. "Afterward," he adds, "we were paid a mark and a half."