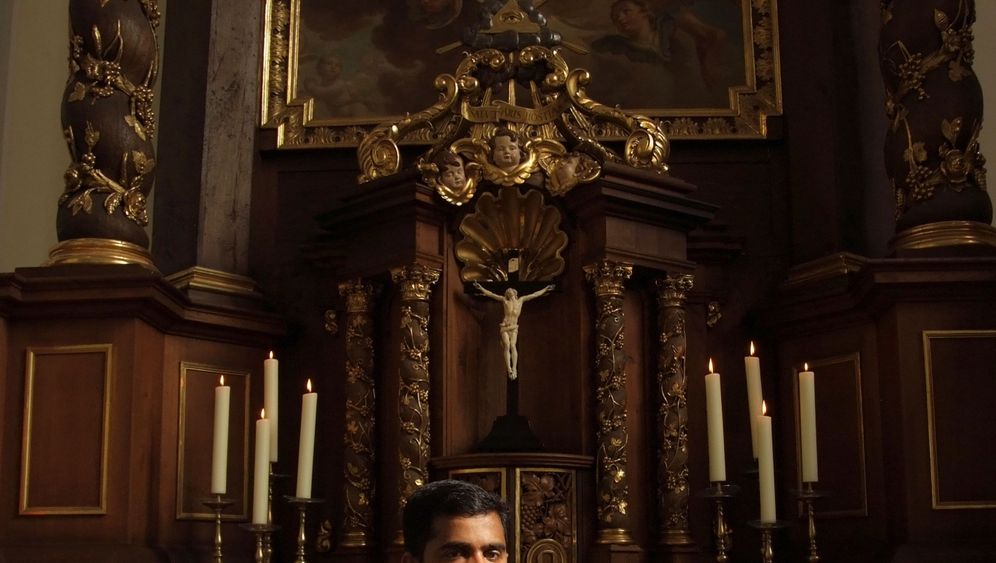 Photo Gallery: Emigrating for the Church

When Benjamine Gaspar first heard the name of the diocese -- Münster -- he kneeled down and prayed. As he recalls it, he then got up, sat down in front of his computer and looked up the name on Wikipedia, where he learned that Münster is a city in northwestern Germany, has a population of 300,000, is the seat of a bishopric and is known as a "bicycle city."

Gaspar, 32, is an Indian and a Catholic. When he first learned about his move to Münster in 2012, Gaspar was living in the southern Indian city of Chennai, where he walked around in jeans, a white polo shirt and sandals.

From the start, Gaspar appeared to be open and excited about his German adventure. "God has a plan," said Father Benjamine, as his former congregation called him. "He knows where he is sending us." Today, he works for the Catholic Diocese of Münster in the town of Bocholt near the Dutch border.

The days are long gone when German missionaries ventured out into the world. These days, the Catholic Church in Germany is experiencing a shortage of new clergy. Almost 10 percent of Catholic priests in Germany, or about 1,300, are foreign -- and many are from India. SPIEGEL visited Gaspar in both his native India and in Germany.

Benjamine Gaspar is gazing out over the Indian Ocean, where the horizon is only a shimmering line in the midday heat. He is about to embark on a long journey.

Gaspar is part of a community called the "Missionary Society of Heralds of Good News," whose members preach in churches worldwide. For the young man, his commitment to the church is also an opportunity to see the world. "My family has been Christian for 10 generations," says Gaspar, noting that perhaps his ancestors found their way to the Christian faith through European missionaries. "The fact that I could become a priest and am now going to Germany is like a dream come true," he says.

The young minister doesn't get to decide where he goes; that's up to the Catholic Church bureaucracy. Language skills are not a factor in its decision. "We do our best, no matter where we are sent," says Gaspar. God knows no borders, he adds.

But the German authorities do. To obtain a visa, Father Benjamine has to prove that he speaks at least some German. That's why he maneuvers his motorcycle through busy streets each morning, passing slums and opulent colonial mansions, on a roughly 20-kilometer (13-mile) ride from the seminary to the Goethe Institute.

The language center is housed in a modern glass and concrete building, with a rooftop terrace overlooking the turbulent sea. For six hours a day, Gaspar grapples with German pronunciation and syntax, often spending additional time memorizing vocabulary after his evening church service. In about three months, the young priest is expected to be ready to communicate effectively on a day-to-day basis in Germany.

Gaspar's teacher, Jerome Rajan, calls his German course, "my holy class." At times, half of the seats in the classroom are filled with shy and diligent priests. Indeed, the priest shortage in Germany is responsible for sold-out German courses more than 10,000 kilometers away.

The Indian priests tend to speak English fluently, have graduated from high school and completed their training in seminars. "But many come from poor backgrounds," the teacher explains, "and not all are as good at languages as Benjamine." For them, says Rajan, it is a great challenge to reach the goals of the course and not disappoint their orders or their families.

Is the German course truly preparing him for everyday life as a minister in Germany? Sometimes Gaspar is skeptical. Today's lesson in his German book is called "Bargain Hunting." One of the exercises reads, "I bought a new cuckoo clock from you two days ago. I would like to return it." Gaspar skips the exercise and flips through the book.

He has a tight schedule, especially on weekends, leaving him little time to practice his German. In some congregations, mass is read eight times on a Sunday, with each priest conducting up to four services a day. During a service at Gaspar's congregation, between 500 and 600 people sit on simple white plastic chairs. When the mass is conducted in Tamil, the local language, the turnout can be as high as 2,000 people. In the summer, when temperatures reach 45 degrees Celsius (113 degrees Fahrenheit), attendance at mass is especially high in the early morning hours, at 5:00 or 6:00 a.m.

Most churchgoers are young women, wrapped in luminous cobalt blue or pink saris, and many are carrying a baby on their arm. Some men wear the dhoti, traditional cotton trousers that resemble a wrap skirt.

Christians are a minority in India, where they make up about 2.3 percent of the population. Given that India is one of the world's most populous countries, however, that's still 28 million people. Southern India is home to a particularly large number of Christians, whose roots date back to the so-called Saint Thomas Christians. Thomas the Apostle reportedly reached India in 54 A.D., which would make the Christian church in India older than that in Europe.

The Christians in Chennai sing loudly and powerfully. The service, held outdoors on the grass under floodlights, is permeated by a scent of incense and ripe mangoes. The sequence barely differs from a mass in Germany, since the liturgy of the Catholic Church is the same everywhere. Gaspar spreads his arms and blesses the children.

"I'm excited about the services in Germany," says Gaspar. He has heard that church attendance is declining in Germany, but he doesn't understand why. Are the Germans losing their faith? Or just their faith in the Church? "In any case, I want to help change this," he says.

"In the name of the Father, and of the Son, and of the Holy Ghost." Gaspar crosses himself as the service comes to an end and looks out at his new congregation in Bocholt. Standing in front of a massive Baroque altar, he folds his hands loosely across his chest. He accentuates each word, in German: "I. Wish. You. All. A. Nice. Day." Then he smiles.

"He's really trying hard," says an 84-year-old woman with curly, white hair. She felt that the new priest from India was "likeable at first glance," adding, "the young man has adjusted very well." The Indian priest is a hard worker who reads the mass "very piously," which she likes -- unlike the African who gave a sermon in a neighboring congregation a few months ago and couldn't be understood.

Gaspar beams when he is told about the conversation with the old woman. It isn't always easy to win over the older people in the congregation, he says, "but that's my most important goal." In fact, the elderly are his most important customers. There are about 70 attending Gaspar's service on this particular Tuesday morning. Almost all are women, everyone is over 60, and the prevailing colors of their summer jackets are brown and beige. Their thin voices quickly fade away in the stone nave.

'A Great Opportunity for the Church'

A few years ago, the Our Lady's Parish where Gaspar works was merged with four others from the surrounding area, and a fifth will be added in 2016. Now a team of seven priests attends to almost 16,000 Catholics. "We're in urgent need of support," says 70-year-old pastor Matthias Conrad. "Benjamine Gaspar is a Godsend for us." Noting that times are changing, Conrad says the need to recruit new priests from abroad would have been unthinkable in the past.

Motivated young men like Gaspar, says Conrad, are "a great opportunity for the church in Germany" because they bring a breath of fresh air into the congregations. "The advantage of a global church like the Catholic Church is that you can get to know other cultures." Conrad sees the contemporary church "as a wide, two-way street." He adds, "For much too long, it was a one-way street from Europe to the rest of the world."

Gaspar, though, has realistic expectations for his new position. "Both sides simply can't expect any miracles," he says. Building trust takes time, explains Gaspar, whose current German visa is valid for five years. He doesn't want to take anyone by surprise. A family invited him to lunch a few days ago. It was a great opportunity to exchange views and one that he would like to have more often, Gaspar says. "Sometimes I encounter skepticism, but also a lot of gratitude and respect."

During Gaspar's opening introduction to the congregation, he asked for encouragement. "I need your help, support, cooperation and, most of all, the Spirit of God, so that I can live and work here as a priest," he haltingly read from a prepared statement, even though he had practiced in front of the mirror.

'They Come to Cry, But Rarely To Laugh'

Although a member of the congregation edits his sermons for him, Gaspar is now able to conduct morning mass on his own. And he will soon begin officiating at funerals. "I still have a lot to learn, but I feel very comfortable in this parish. These people are almost like a family to me by now," says Gaspar.

Summing up his initial impressions, Gaspar says: "In contrast to India, the young people here don't seem to have a lot of worries -- or at least they don't tell us about them in church." Only when it comes to the existential things in life do the Germans seek solace with a priest, he adds. "They come to cry, but rarely to laugh."

In India, he would often spend afternoons spontaneously visiting members of his congregation at their homes, to ask about their children or perhaps a sick mother-in-law. In Bocholt, he quickly learned that there are stricter societal rules to be observed. "I already knew that the Germans are punctual, but now I also know that you always have to call before you visit," Gaspar says with a chuckle.

He often cycles around Bocholt and the surrounding countryside in the evening on his new bike -- a welcome gift from the parish. Gaspar is visibly moved when he tells the story of how his colleagues gave it to him during a service. It made him think of the Wikipedia article he had read in Chennai, and that strange expression: "bicycle city."