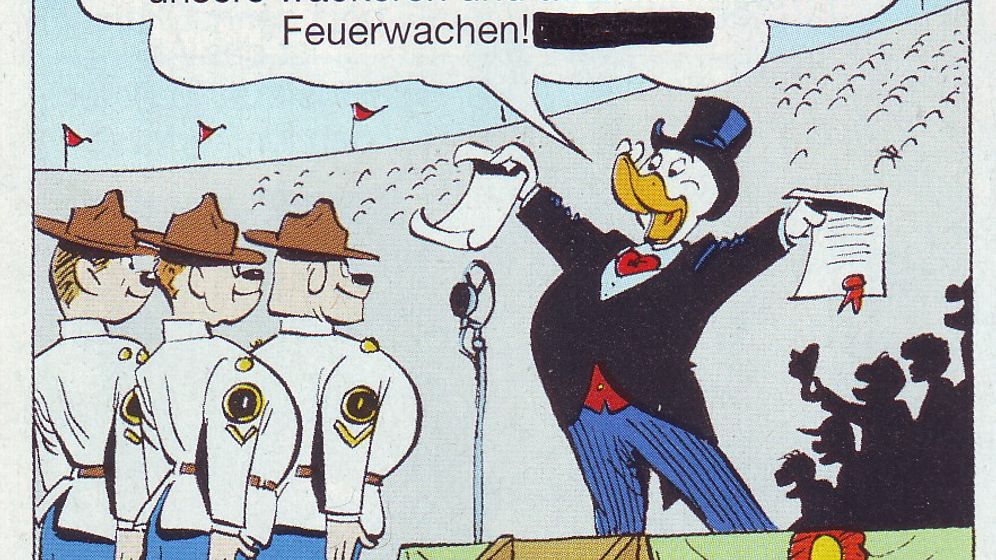 The word "Holocaust" is not some new way to say "Congratulations" in Duckburg, home to Donald Duck and his comic cohorts. But in the most recent German translation of the Junior Woodchucks comic from the Mickey Mouse universe, that is exactly how it appears. In the episode titled "Where is the Smoke?" a dignitary honors a team of firefighters, with the German words, in the bubble above his beak, boasting of the "awards to our brave and always alert fire lookouts! Holocaust!"

The original comic, written by Carl Barks and appearing in 1972, used the word as a synonym for "inferno" or "blaze." The duck dignitary gives plaques to the fire lookouts for pinpointing the "awesome Holocaust."

German publisher Egmont Ehapa, which brings the Mickey Mouse comics to the country, says the mistake was not a translation error. The word didn't appear in the translator manuscript, spokesperson Elke Schickedanz told SPIEGEL ONLINE. The mistake came up during production, when the English text in the word bubbles was not thoroughly removed, she said.

The comic book, which was supposed to appear on May 8, was promptly recalled. The word "Holocaust" was blacked out by hand and the new edition should be available in stores this week. There were still a few copies of the original German comic sold in May before the recall.

Donald Duck Takes On The Nazis

When the publisher printed the German version it reduced the number of times that the book appears in the comic. Still Ehapa came under fire about seven years ago for translating comic books that attempted to make the horrors of the Holocaust more accessible to young readers.

It's also not the first time that Donald Duck has been mixed up with the Nazis. During World War II the US enlisted Walt Disney, creator of the comics, in efforts using Mickey Mouse, Donald Duck, Bambi and others to spread anti-Nazi messages. In 1984 Donald Duck was awarded the rank of sergeant by the US Army for his wartime service.