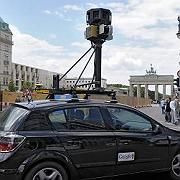 Google's mission "to organize the world's information" has just met a formidable foe in the form of the town of Molfsee near Kiel in the northwestern German state of Schleswig-Holstein.

The picturesque, but not picture-friendly town hopes to block the Internet giant from filming its streets and the houses of its fewer than 5,000 inhabitants for its "Street View" program -- a service that provides 360-degree, street level images via the Google Maps search engine.

"We are not going to let this happen," Reinhold Harwart, the leader of the CDU on the town council, told the Lübecker Nachrichten daily Sunday. "You can see everything in those photos! That is opening house and home to criminals!"

Harwart's worries are shared at the state and federal levels. "We find the project extremely alarming," Marit Hansen, the state's deputy officer in charge of privacy protection, told the same paper. "It gathers personal data and puts it on the Internet. That will not do." Peter Schaar, Germany's Federal Commissioner for Data Protection, told the Süddeutsche Zeitung that he had major misgivings about Google's plans.

The Street View program, which uses a combination of photographs taken from cameras mounted on the roofs of cars and global positioning technology, has elicited similar responses around the world since it was first introduced in San Francisco in May 2007. Since then it has spread to dozens of other cities across the globe. The worries range from those of people worrying that the program could be used to help would-be kidnappers, people patronizing adult entertainment establishments or even people trying to hide the fact that they smoke from a spouse.

As far as Google is concerned, the complaints are much ado about nothing. "You can't really see anything more than a person walking down the street would," Kay Oberbeck, Google's spokesman for North and Central Europe told the Berlin daily Die Tageszeitung. "But, whereas that person can look over the hedge, our cameras can't." He added that the program automatically blurs out the faces of people and license plate numbers caught in the images.

Filming residential streets, which Google has been doing in this country for a few months, is not illegal in Germany. But to stop Google from filming its community, Molfsee plans to require the company to get a permit, citing laws related to traffic and commercial activities in public spaces. "We will require that they get a special-use permit for the streets," Harwart told Die Tageszeitung. "People can't just put tables or benches out on the street to sell ice cream. In such cases, people need permits."

"And when they ask for a permit," Harwart added, "we will say no."

But Google doesn't seem bothered by the threat. "We don't need permits," Oberbeck says, arguing that the streets are public property. "Street View is not a tool designed for criminals."

In the meantime, according to the Süddeutsche Zeitung, Molfsee, Lübeck and a number of communities in Schleswig-Holstein are looking into taking legal actions to protect themselves from Google's prying eyes.