"Our leader until death. 'Yes' until death. The Fatherland until death," is scrawled on a piece of paper. It's a woman's brief love letter to Recep Tayyip Erdogan, complete with two red hearts. She then took a picture of it, along with her ballot, using her smartphone. She then posted it on Facebook, for the world to see.

Other online messages are openly hostile. "I stamped my vote as if I were bashing the infidels," wrote one Turkish-German man, who also photographed his note next to his ballot. For Turkey's upcoming national referendum on whether to amend their constitution, voters don't check off a box -- they instead stamp their decision onto the ballot with "Hayir" (no) or with "Evet" (yes).

Since March 27, when the polls opened for the 1.4 million Turks eligible to vote in Germany, lots of these photo-testimonials have been making the rounds on social networks, and they're more often filled with hate than hearts. On April 16, the Turkish people will decide if President Recep Tayyip Erdogan will be allowed to restructure the Turkish government into a presidential system. It's basically the only thing being discussed right now on Turkish-German news blogs, Facebook pages and Instagram profiles.

Most of the Erdogan followers bustling about online are simmering with excitement at the prospect of further expanding their president's powers. But they're skipping over the comment threads on Facebook pages like Muslim Mainstream and News Special 24. These pages only have around 10,000 users. By contrast, a page called Ottoman Generation, which evokes Turkey's historic grandeur, has already been liked 50,000 times.

The fierce dispute between Germany and Turkey surrounding Turkish politicians' campaign appearances in the country has garnered lots of new fans for pro-Erdogan groups. Debates were previously fueled by outrage over a video sketch by German TV comedian Jan Böhmermann that was highly offensive to Erdogan, or in response to a German parliament resolution recognizing the deaths of over a million Armenians at the hands of the Turks in 1915 as genocide.

These controversies have given rise to a deeply conservative, Muslim alternative-public sphere -- with different issues, different opinions and different truths than those being discussed by the German public. The ways of thinking that manifest here can be disturbing at times. There's broad agreement among users, for example, that Zionist financiers control the German media. A similar claim is that Western powers would like to help establish a Greater Israel encompassing large parts of the region. And didn't the Germans have their fingers in the coup attempt in Turkey last summer?

Four years ago, Ömer Faruk, who is in his early-20s and lives in Frankfurt, co-founded the Facebook page We've Got Erdogan. Faruk currently spends several hours each day posting comments, uploading videos and writing messages on Facebook and Instagram. He says he's part of a core group of 50 to 70 young people who populate several of these pages with content. Ottoman Generation is part of his friend network, as are Unchained New Turkey and Pride of Turkey -- R. T. Erdogan.

"The German-Turkish community is relying on us to do this," Faruk claims. Most Turks don't feel like they are being represented properly in the German media. Furthermore, he says, there is a massive need for "correct information" about Turkey. He asks, for example, why no German news platforms reported about Erdogan's visit to a campaign booth run by the opposition in Istanbul several days ago because he wanted to start a dialog. And he answers himself immediately: "Because that doesn't fit with your image of him."

Hobby journalist Faruk and his fellow campaigners have used Turkish media to research their news, but they also inquire directly with the governing Justice and Development Party (AKP). They've set up a direct line to members of parliament in Turkey in the form of a WhatsApp messaging group.

Faruk was born in Germany and wants to begin studying law here when the next semester starts. He says he also thoroughly reads German newspapers and magazines, but that falls more along the lines of enemy surveillance. He describes much of what he sees there as "total nonsense." For example, he claims that things often get incorrectly quoted from the original Turkish. When Erdogan was talking about members of the German parliament with Turkish roots who voted for the resolution on the Armenian Genocide, he said they had "spoiled blood," which was translated literally. Faruk says it would make more sense to say they had bad character -- that's what the saying means. However, many publications did in fact reference both interpretations of the phrase.

Cem Özdemir, a Turkish-German politician, is one of the most-hated figures for these Turkish online groups. A video of the Green Party leader voting "no" in the referendum has gone viral in recent days on Facebook. He's almost exclusively referred to as "Götdemir" in comment threads online. "Göt" means "butt" in Turkish. "Sonofabitch," "shameful bastard" and "half-bake" are among the more flattering disparagements.

Erdogan followers are also taking aim at Can Dündar, the former editor-in-chief of the center-left newspaper Cumhuriyet. A picture of him is circulating online in which his mouth has been replaced with an anus. And people are hoping that Deniz Yücel, a German-Turkish journalist currently detained in Turkey, "will die a miserable death in jail."

Some platforms are alleging that a picture of Yücel taken at a cultural event called Hate Poetry proves how close he is with the Kurdistan Workers' Party (PKK), which is considered a terrorist organization in Turkey. German journalists with immigrant backgrounds use the podium at Hate Poetry to poke fun at readers' letters that are racist or otherwise hateful. The stage is always decorated with garlands and flags. A portrait of PKK leader Abdullah Öcalan is sometimes placed next to a picture of Angela Merkel on the table. It's a satirical statement, not a political one. But for online Turkish propaganda, it serves as proof.

Blogger Bilgili Üretmen, in particular, has taken aim at Yücel, who is the Turkey correspondent for the conservative German daily Die Welt. Üretmen uploaded a photo of the journalist on his Facebook profile as the cover image, signed with "#FCKYücel." Üretmen underscores his messages by giving his videos titles like #YESwithapunchinthefaceYES" (more than 140,000 views) and encouraging a "collective morning barf" via livestream (more than 20,000 views) on the day of the Dutch parliamentary election in March. (The Netherlands also squabbled with Turkish leaders over efforts to campaign in that country for Ankara's constitutional reform referendum.)

Faruk of We've Got Erdogan avoids such shrill tones and he is polite in conversation. Nevertheless, he doesn't delete many of his users' hate-filled comments. He says he doesn't endorse such speech, but adds that "it wouldn't be possible, in terms of time alone, to check and delete everything." On top of that: "If you sow hate, you have to reckon with reaping hate." Faruk says that he and his page are often themselves the targets of threats and insults coming from right-wingers, but also from opponents of Erdogan.

Siamak Ahmadi, 35, is acquainted with most of the common conspiracy theories. He finds them online, but also offline, when talking to young men and women. The Berlin-based psychologist co-founded the initiative Dialog Macht Schule, or "Dialogue Is Catching On." The project's aim is to strengthen understanding of democracy as well as the personal development of the young people who are its focus, the majority of whom have immigrant backgrounds. Ahmadi and his team send dialogue moderators into schools to discuss issues such as social media, identity and terrorism. Sometimes they also let the youth make their own contributions, which they can then post on Facebook.

In this way, the initiative attempts to form a kind of counterweight to the popular online platforms. This includes platforms like the page Killuminati , which alone has 600,000 subscribers on Facebook. Sites like these in no way limit themselves to the mere propagation of conspiracy theories. They also address questions that many young Muslims are also apparently asking. Questions like: Why did Tunisian-German football player Änis Ben-Hatira have to leave the team Darmstadt 98 after expressing his support for Ansaar International? Germany's domestic intelligence agency claims that the aid organization has deep ties to the German Salafist scene. Or: Why was the German media so quick to forget the death of a young Syrian man in Bremen who was allegedly beaten to death by a group of Kurds? Why isn't strong action being taken against the PKK, which is banned as a terror organization in Germany, but is also active in the country?

"Pages like Ottoman Generation address these kinds of questions," Ahmadi says. "They give young people the feeling, 'We are here for you, you are one of us.'" This appeals to them, especially during adolescence, when individuals are often searching for their identity.

A study conducted in 2012 by the University of Bielefeld found that only 16.5 percent of Muslims in Germany had the feeling that the established German media was concerned with their needs. A lot has happened since then, which hasn't necessarily improved these relations. More than 80 percent felt the media often resorted to stereotypes in its depiction of Muslims.

A Turkish-German recently posted his own message from a polling booth in a Turkish consulate on Facebook. "This yes is for you," he wrote on a piece of paper next to his ballot. "For Cem Götdemir and the German media." 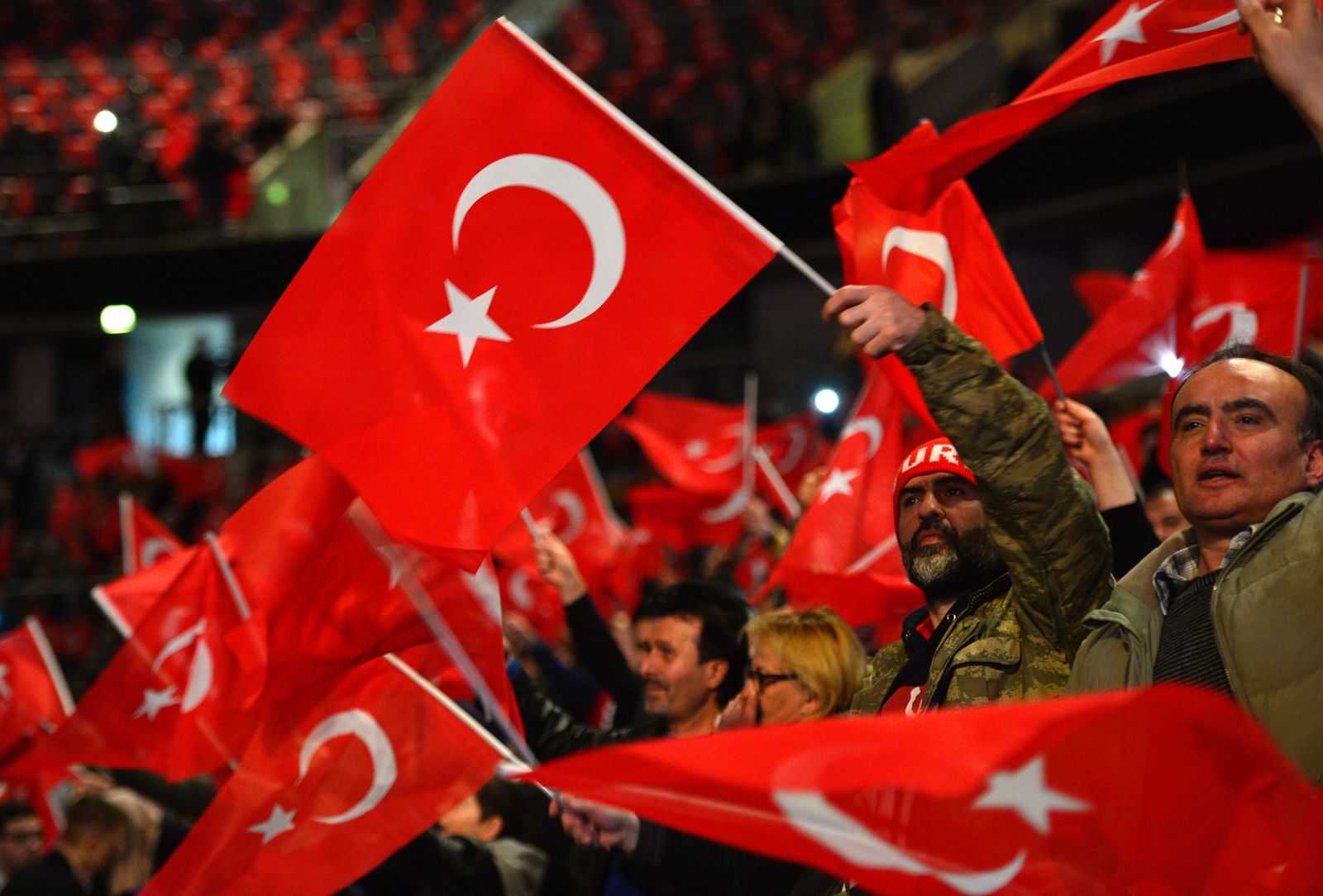 Erdogan supporters at a rally in Oberhausen, Germany 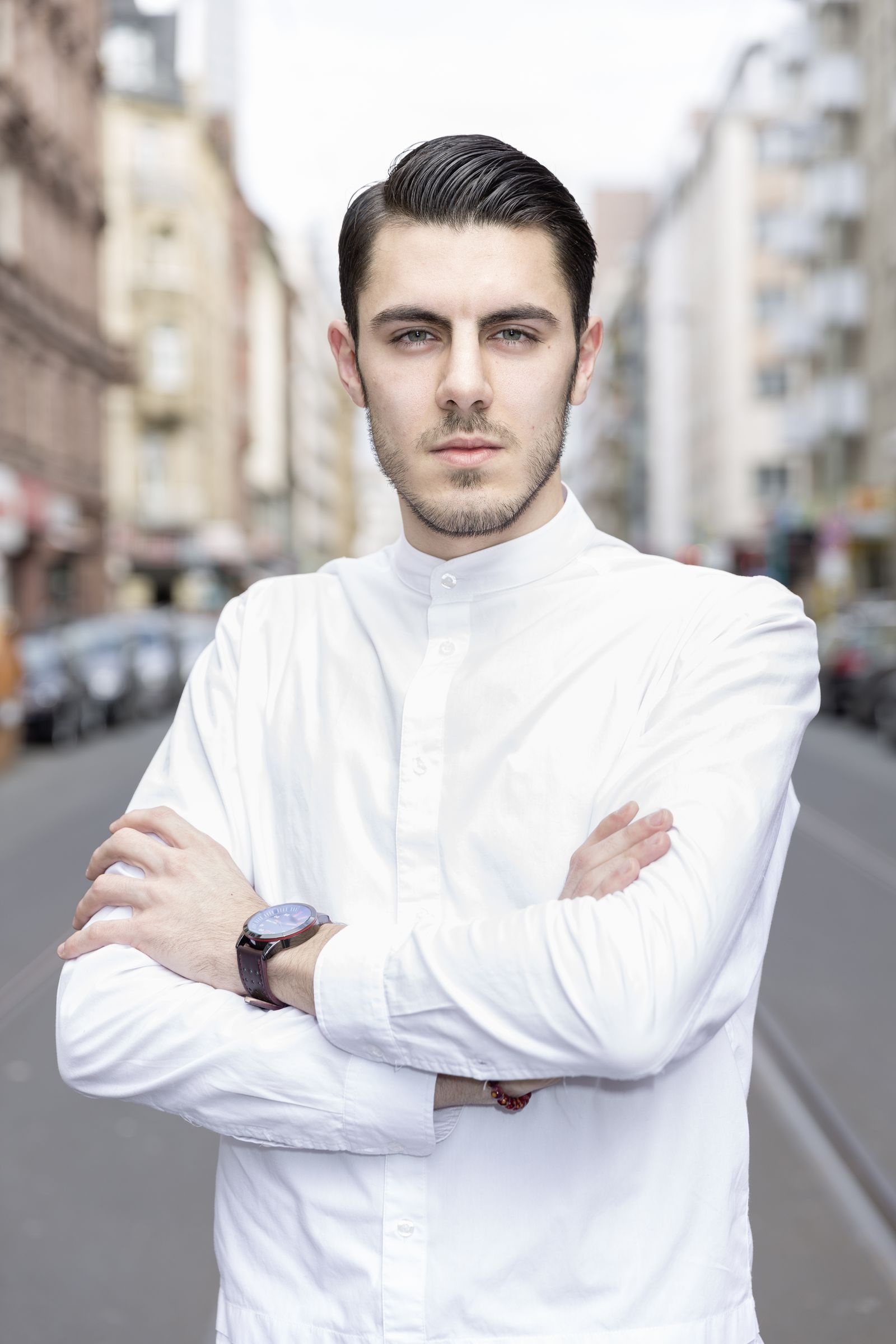 Ömer Faruk in Frankfurt: "The German-Turkish community is relying on us."