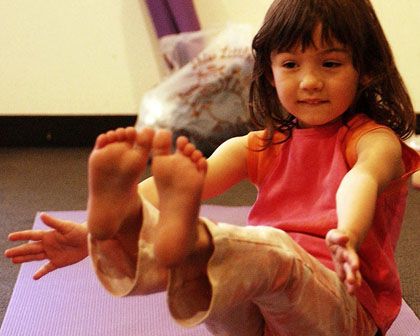 Recently I attended my first pregnant yoga class in Prenzlauer Berg, Berlin. There we were, eight prostrate bellies strewn across the floor, like mushrooms at various stages of ripeness. Candles flickered in the corners and the instructor Ilonas voice sank into its most mesmerizing register.

Now bring your feet up to your posteriors, she says in German, and eight pairs of knees creak their way into position. I quickly learn that, at pregnant yoga classes in Prenzlauer Berg, a posterior is a bum, the sky is the ceiling, and our wombs are our centers of gravity -- which seems fitting in a neighborhood that revolves around babies.

Prenzlauer Berg, a district of former East Berlin, has become synonymous with everything that the rest of East Germany is not: its young, prosperous, and brimming with children. Half of its 143,000 inhabitants are between the ages of 25 and 45, and in a city already famous for cultural production, its considered the center of Germanys new creative class, not to mention procreative spirit.

The neighborhoods reproductive renown is thanks largely to its uniqueness in the larger German picture. Birth rates, which have been sinking since the late 1990s, have hit historical lows. (Editor's note: After the publication of this story, the German government announced an increase in the fertility to rate in 2007 from an average number of 1.37 children per woman from 1.33 the previous year, but it is still too early to determine whether a trend is taking hold.) Since 2006, Germany has had the lowest birth rate in Europe (8.2 children per 1,000 people). This is a problem in a country thats constitutionally allergic to immigration. German women are entering motherhood late (at 30, on average) and having half a child short of what would be required (2.1) to maintain a stable population. As politicians cast longing glances toward places like France (12.7 per 1,000) and Ireland (15.2 per 1,000), analysts delve into Germanys Nazi past to suggest that the lack of political will to push for children is a deep-seated reluctance to echo Hitlers celebration of the Übermutter.

Über or not, the German Mutter is a loaded concept, as the current family minister Ursula von der Leyen -- a breakout star of the current governing coalition --demonstrates. Herself a mother of seven, she has broken rank with her own Christian Democratic Party by suggesting that motherhood must be made more compatible with career in Germany. Under her direction, the traditional Mutterschutz, paid leave for employed mothers-to-be (6 weeks before and 8 weeks after birth), has been supplemented by parent benefits (Elterngeld) for 12 to 14 months after the birth. Now a parent --even a freelancer -- who stays at home can receive two thirds of previous net income from the state. The policy explicitly encourages parents to share the stay-at-home childrearing by extending parental leave benefits from 12 to 14 months for couples that take time off work in the first year. In addition, von der Leyen has announced a dramatic increase in day-care facilities (500,000 additional spots by 2013) and has spoken out against her own partys proposed incentive program to keep mothers home: a €150 monthly payment to women who dont work for the first three years. In response, she has been called a Rabenmutter (bad mother) who supports the nationalization of the child. The outspoken (and childless) Bishop of Augsburg, Walter Mixa, deigned to suggest that the minister probably has no understanding of the real mother-child relationship, having let hers be raised by wet nurses. 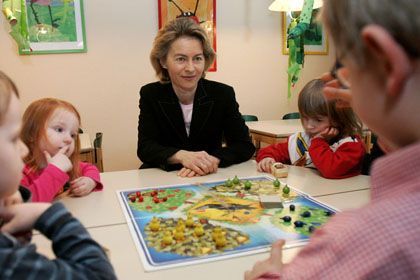 Be it for reasons of religion or tradition, resistance to childcare sits deeper in Germany than elsewhere in Europe and the correlation with birth-rates is clear. Denmark, for example, with a respectable average of 1.8 children per woman, sends 87 percent of its under-three year olds to day-care, while in Germany the same percent of children in this age group stay home. Minister von der Leyen may well be onto a good thing with her reforms, but, given the ideological barriers shes up against, change will be slow in coming. The demographic dip is most dramatic in the East. When the federal minister of transport Wolfgang Tiefensee announced this summer that he was going to launch an incentive program to lure young women back to the East, the German media had a heyday, speculating how this breeder-baiting would work. But the problem is real and the question of how to staunch the flow of lifeblood to the West has topped Germanys domestic agenda since reunification.

Against this backdrop, Prenzlauer Berg becomes a beacon of hope -- and a paradise for todays Mutter-in-the-works. She walks into a pharmacy at the end of a long working day looking for lip balm and puts her request to the white coat behind the counter.

White coat beams beatifically and Mutter-to-be walks out of pharmacy with medicated lip balm, iron supplements, and countless complimentary samples of sweet almond oil for stretch mark prevention and wheat germ perineum oil for what, Mutter-to-be doesnt want to know. Prenzlauer Berg regularly gets called home to Europes highest birth rate. And while demographer Reiner Klingholz may be right that the districts particularity lies in the high percentage of young women and not their level of reproduction, his argument does little to change the impression one has meandering through its cobblestone streets: that fertility is in the air.

For those who lived in Prenzlauer Berg prior to the fall of the Berlin Wall, it must seem very strange. But then there arent many of them left: the exodus from Prenzlauer Berg since 1990 is estimated at 80 percent. This also explains the districts demographic exceptionality. Post-reunification, Prenzlauer Berg was one of the first parts of East Berlin to be discovered and colonized by West Germans. Decrepit buildings were bought by developers at rock-bottom prices, restoration projects were subsidized by the city. The grey Soviet-era stucco was chipped off to reveal beautiful Art Deco facades. Interiors were restored. Balconies and bathrooms that had been torn out by the East German regime as decadent appendages were replaced with a bourgeois vengeance. The vacant lots of buildings that had been bombed in World War II became parks and playgrounds.

This sense of resurrection made Prenzlauer Berg popular among students, artists, and free-spirits from the West. They came in droves, with their Ikea furniture and dreams of new beginnings. What was cheap for them was anything but for the natives, who moved into the concrete high-rise apartment buildings of the East Berlin suburbs that stood no risk of attracting West Germans. And it wasnt just the prices that drove them out -- it was the cafes serving infinite Italian variations on what used to be a straight-forward beverage, the health food stores carrying fourteen types of lettuce, and the Smart cars occupying every square inch of what used to be largely biked and walked streets.

After a decade of studying, dreaming, and renovating, Prenzlauer Bergs first wave of settlement became established, money-earning and child-yielding. And it drew more of its kind. German sociologists wrap their tongues around the word Gentrifizierung in describing the process. And Berliners joke that you should only move to Prenzlauer Berg if youre in the mood for children. Not because youll be surrounded by them, but because between whatevers in the air and the social pressure, youll be having them before you know it. Of course thats grossly exaggerated. In my case, it took a good half year.