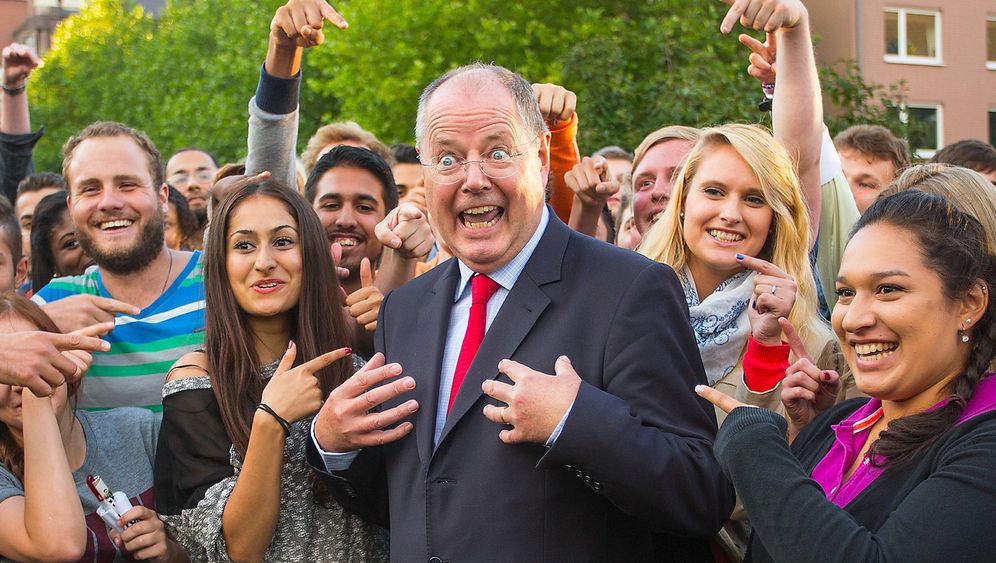 A decade from now when, or rather if, Germans look back on Peer Steinbrück's 2013 campaign to oust Angela Merkel, most of them are likely to remember only one thing -- a photo of him showing his middle finger.

Published with his blessing on the front cover of a magazine last Friday, it was intended as a humorous response to media criticism of his many gaffes since he was picked almost a year ago as the Social Democratic candidate to run against the incumbent chancellor.

It neatly sums up his approach to campaigning: If you don't like me, screw you. The image also provides a fitting epitaph for a campaign that was poorly devised and ill-fated the moment Steinbrück was picked.

Some say the 66-year-old former finance minister, a trained economist, is aloof, arrogant, prone to facetiousness, biting sarcasm and outbursts of anger.

Others credit him with having at least tried to inject some life into a hopelessly dreary election against a bland incumbent who looks impossible to unseat because most voters simply don't want change at the top.

There's no doubt that he's quick-witted. Asked during a TV interview whether he was worried his age would show during the rigors of an election campaign, he patted his cheeks and said: "No, I've got a great night crème."

But his flippancy, delivered in the nasal brogue of Hamburg, the northern port city where he was born, also makes him seem indifferent at times. One analyst recalled that during one recent campaign appearance, a woman asked Steinbrück how the SPD proposed to increase people's desire to have children. He snickered and then asked to be excused from answering. It got him a laugh from the audience, but he missed a chance to explain the SPD's policies on an important topic.

Getting Laughs Rather Than Votes

Last week in the southern city of Würzburg, he said Merkel's conservatives were trying to demonize the SPD and to make people scared of a center-left government. To illustrate his point he started grimacing and hobbling about the stage like a headless ghoul haunting Germany, bent on "nationalizing hairdryers and shavers."

"His motto seems to be it's better to make a joke and lose a friend than to miss a laugh from the audience," Richard Schütze, head of a Berlin-based media and communications consultancy, told SPIEGEL ONLINE.

"Initially, his style has impact because it amuses the crowd, it has a certain beer hall appeal. But it leaves a bitter aftertaste, because people later think about it and decide 'he was showing us that we're intellectually inferior to him,'" said Schütze. "Merkel by contrast doesn't demand too much of people, she's says everything's OK, and she exudes calm."

Showing the finger wasn't a good idea, said Schütze. "It will remain as a kind of trademark. The gesture amounts to an attack, an accusation, an insult to an audience, in this case journalists, which makes it doubly unwise."

Throughout the campaign, Merkel has been able to sit back and look presidential. Her Christian Democratic Union party has plastered German cities with posters showing her flashing her famous enigmatic smile together with the vacuous slogan "Successful Together."

To be fair, Steinbrück, well known for his straight-talking style, had little choice but to run an aggressive campaign. It was the only way to distinguish himself from Merkel and to give voters the illusion that they faced a real political choice. In truth though, their policies aren't very far apart. On key issues like the euro crisis, Merkel's conservatives and Steinbrück's SPD have been in lockstep. And Steinbrück and Merkel worked well together when he was finance minister in her government between 2005 and 2009.

"He has to attack, and he tries to use a lot mimicry and emotion in his campaign appearances," said Schütze. "He responds very directly to questions and allows himself to be drawn in to discussions and pins himself down. Merkel is much more cautious."

Steinbrück, an experienced political administrator who was governor of Germany's most populous state, North Rhine-Westphalia, got off to a poor start after his selection as the party's candidate last October. First, he was dogged by revelations that he had earned over a million euros from corporate speaking engagements -- not the most appropriate resume item for an SPD candidate supposedly representing the working class.

He didn't help himself when he said he wouldn't buy a bottle of Pinot Grigio wine for less than €5. Then he made the mistake of saying in a newspaper interview last December that chancellors should be paid higher salaries. It all jarred with his promise to create more social justice and to fight for a minimum wage.

He kept on putting his foot in his mouth. After the Italian election in February, he offended Italians by calling Silvio Berlusconi and populist leader Beppe Grillo "clowns." He said: "To a certain degree, I am horrified that two clowns won the election." Italian President Giorgio Napolitano, in Germany for a visit, promptly cancelled a planned meeting with Steinbrück as a result of the comment.

The remark won him headlines but no kudos. "You don't say something like that if you're running for the most powerful office in an important country," Thomas Jäger, a political scientist at the University of Cologne, told SPIEGEL ONLINE.

But Steinbrück has never been known for diplomatic finesse. In 2009, while he was finance minister in a Merkel-led coalition, he angered Switzerland during a drive to crack down on tax havens, comparing the country to "Indians" running from the cavalry. One irate member of the Swiss parliament responded by comparing him to the Nazis.

Germans credit Steinbrück with having done a good job steering them through the 2008 financial and banking crisis as finance minister. But his shoot-from-the-hip style, refreshingly different from Merkel's caution, doesn't chime with voters even though he has an impressive grasp of detail and policy complexities.

Plenty of Tactics, No Strategy

A Forsa poll released on Tuesday showed that 53 percent of Germans favored Merkel as chancellor, miles ahead of Steinbrück at 26 percent.

For Jäger, Steinbrück was always a poor fit. "Throughout the campaign I never understood what strategy the SPD and Steinbrück were pursuing. It was never clear what voters they wanted to reach."

The SPD has shifted sharply to the left in recent years in a bid to lure back the millions of voters who abandoned the party in disgust following its bold but unpopular "Agenda 2010" welfare cutbacks and labor reforms. Well-heeled Steinbrück, meanwhile, an unashamed backer of Agenda 2010, had been in political retirement since 2009, earning good money by lecturing captains of industry.

"That explains a lot of what went wrong. Much of what Steinbrück did in the campaign was pure tactics. He tried to whip up sentiment, get on the front pages, get people interested in him, but all these tactical measures lacked a strategy."

So why did they choose him in the first place? Because the two other contenders, SPD leader Sigmar Gabriel and parliamentary group leader Frank-Walter Steinmeier, didn't want to run. Steinmeier was also damaged by his poor showing against Merkel in the 2009 election.

Party leaders put Steinbrück on a shorter leash in January, limiting his say in campaign strategy and insisting that his newspaper interviews be proofread by campaign headquarters to stop screw-ups like the chancellor salary comment.

But the gaffes kept on coming and Steinbrück's authority was damaged by more or less open criticism from SPD leaders. People began to wonder whether he was about to throw in the towel, which explains the astonishingly rapturous applause he got from delegates at a party conference in Augsburg in April when he opened his speech with what would seem a trite sentence for a chancellor candidate: "I want to be chancellor of Germany."

Then in June, the pressure seemed to be getting to him again. The tough political warhorse was reduced to tears at an SPD event after his wife Gertrud described how upset she was by the image of her husband being peddled in the German media. "It's hard to take," she said.

There's no denying that the media has had their knives out for Steinbrück and were always waiting for his next verbal slip-up. But they never had to wait long. The next gaffe came in July when he complained about EU regulations and said he was hoarding a hundred French lightbulbs in his cellar "because I don't know if I'll still get them in five years for my French lamp."

"His problem is that he has to convey Social Democratic values but struggles to appeal to people's emotions in this respect," said Gero Neugebauer, a political analyst at Berlin's Free University. "He lacks proximity to the man in the street because he doesn't really know how he lives. And he has difficulty overcoming the burden of winning back voters who were put off by Agenda 2010, which he supported at the time. It's a credibility problem."

But Neugebauer said Steinbrück's campaign style has improved in recent months. Commentators said he gave a solid, if surprisingly low-key performance in his TV debate against Merkel in which he looked more dynamic and convincing than her. The SPD has inched up a few points since, possibly helped by the disastrous paedophilia debate engulfing the Greens, the SPD's partners of choice in the highly unlikely event that they will secure a parliamentary majority on Sunday.

Indeed, Merkel's own partner, the pro-business FDP, is looking so weak in polls that Merkel may end up having to form a so-called grand coalition with the SPD as junior partner.

What role would Steinbrück play in those talks? It's unclear. He has clearly stated that he doesn't want anything to do with a grand coalition. Unless he achieves a significantly better result for the SPD than than the 25 percent it got in 2009, he's likely to resume his political retirement quite soon, say analysts.

Either way, his clout is likely to be limited by his lack of a political legacy. He had after all abandoned high politics when he stopped being finance minister in 2009.

"The question is how the party will respond to the election outcome, " said Jäger. "I'm not so sure if the big names will still play a role. It could be that a lot of frustration will get vented in the SPD because so much has gone wrong."

The SPD, the grand old party that celebrated its 150th anniversary this year; the party that resisted Hitler; the party that promoted Cold War detente under Chancellor Willy Brandt; the party that has done so much to modernize Germany and keep its economy competitive -- is still being punished by the Agenda 2010.

Ironically, the economic strength that Merkel claims credit for stems in part from those reforms. And with its leftward lurch, the SPD has been unwilling to point out the fallacy.

More to the point, however, the SPD badly lacks a campaigner like former Chancellor Gerhard Schröder or Willy Brandt to give Merkel a run for her money. Steinbrück, say analysts, was simply the wrong man for the job despite his admirable qualities as a political administrator.

"He's been riding up and down the ranks on his white stallion trying to fire people up but he doesn't awaken solidarity or any revolutionary fervor like Willy Brandt could," says Schütze, the media consultant. "He doesn't make people think we'll flock to the flag and all march in the same direction."