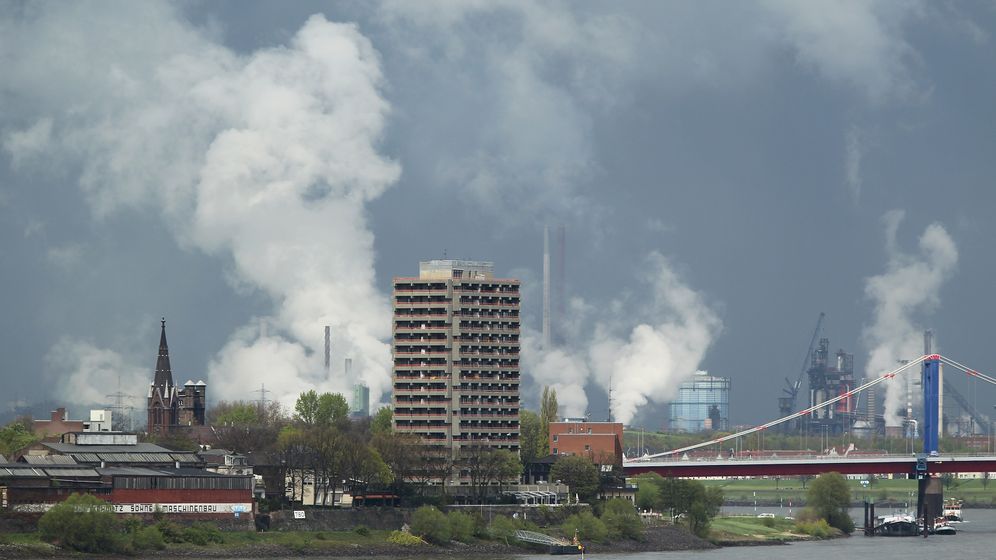 In the heroic days of the coal mines, when 500,000 dust-covered miners risked their lives to drill their way through increasingly deeper layers of coal, they had a fatalistic motto underground: "It's dangerous in front of the miner's pick."

Now, the industry has virtually gone bust, and most of the region's mines have been closed. "In 2018, all mining subsidies will be discontinued," says Jochen Stemplewski, "and then the adage will be: 'The last man out can turn off the lights.'"

The man who has so unsentimentally come up with a new slogan for the Ruhr region, the industrial rust belt in western Germany, is the head of Germany's largest sewage treatment provider, based in the city of Essen. As the master of all manhole covers, he flushes out the bathwater and fecal matter of some 3 million area residents. A crew of over 1,500 helps him meet this challenge.

But Stemplewski, 59, has a problem. On this fall autumn day, the sewage manager is standing in rubber boots on a bridge near Dortmund. He points straight down to a brownish river on which used toilet paper and condoms are drifting by.

"That's the Emscher", he says and turns up his nose. The smelly waterway flows over 80 kilometers (50 miles) through the old coalfields. It's a gigantic open sewer -- the largest in Europe. Slaughterhouses and steel mills discharge their offal and refuse here, and the river is a depository for heavy metals and feces.

The reason behind this unfortunate and somewhat pre-modern situation is that the ground is sinking in many parts of the Ruhr Valley. Mine shafts honeycomb the substrata, making it impossible to build conventional underground sewers. Clay pipes would burst, and masonry ducts would crack.

Given the circumstances, the region long ago opted for an open system in which the steel and mining industries have been dumping a growing torrent of toxins and filth since the 19th century. Many of the Emscher's tributaries have also been transformed into cement-dammed pools of wastewater.

In 1901, a typhus epidemic claimed over 200 lives in the city of Gelsenkirchen. At the time, a physician warned that the river was "black from a slurry of coal dust, discharges from the cities and runoff from farmer's fields, and sometimes so thick that a stick stands upright in it."

Since then, basically nothing has changed. The river's cement banks are fenced off, creating what experts call a "no-go area behind barbed wire."

It's not uncommon for local residents to throw plastic trash in the sewer, along with lawn chairs and umbrellas. Tons of leaves are also dumped in every fall. All of this makes life extremely difficult for workers at the sewage treatment plants.

Corpses occasionally float by. Children slip on the embankments, and even frogmen have drowned in it. Michael Holzach, a prominent writer and journalist for the German weekly Die Zeit, died here in 1983 while trying to rescue his dog.

But now there are plans to make all of this a thing of the past. Shortly after German reunification, in 1990, 19 municipalities and numerous companies joined forces to create the Emschergenossenschaft, or "Emscher Cooperative," and draft an ambitious plan. The goal is to use a high-tech sewage system to relieve the burden on the river and its tributaries and transform them back into babbling brooks flowing past blossoming meadows.

This has already succeeded in the upper course of the river, along its first 15 kilometers near Holzwickede. The concrete embankments have been torn up and replaced with greenery. Biologists have already spotted the first freshwater shrimp and snails in the river. Fish species, such as the stickleback, are expected to return soon.

They have also been working on the main artery for a number of weeks now. Plans call for a huge sewage pipe, nearly 3 meters (10 feet) in diameter, to run underground over a distance of 50 kilometers to Dinslaken on the Rhine River. It will also gather all the muck from the tributaries.

In the Mengede district of Dortmund, the drilling teams report for work at 8 a.m. wearing mud-spattered protective clothing and standing in a hole 12 meters deep. Before them, a tunnel-boring machine with metal teeth grinds its way through the ground. A crane lowers a concrete pipe weighing 18 metric tons into the abyss. Bit by bit, they are creating a stony serpent that will ultimately consist of 20,000 segments.

However, this tube will be off-limits for human maintenance and cleaning crews, as it's simply too dangerous. The sewer's access shafts are spaced up to 1,000 meters apart, and sudden downpours could trap and drown anyone inside.

Instead, service robots will maintain and clean the pipes -- and locate cracks. The devices were engineered by the Fraunhofer Institute for Factory Operation and Automation (IFF) in the eastern German city of Magdeburg. Each of these monsters weighs two metric tons, rolls on wheels splayed off to the sides and uses high-pressure hoses to spray away aggressive sulfur bacteria.

The Challenges of 'Renaturation'

But the teams have a long way to go before they reach that stage. "First we have to search the entire route for bombs," says Stemplewski. He notes that half a dozen explosives from World War II have been discovered on the roughly 12-kilometer stretch between Bochum and Castrop-Rauxel alone.

Near Dülmen, workers have come across the camp of a Roman legion. At other locations, they have discovered ancient Germanic household items and a mammoth tusk. Though fascinating, all of this costs time, causes delays and slows down the project.

There are additional problems: In order to keep the sewage flowing, the main pipe has to have a downward slope of 1.5 per mill, meaning it drops 1.5 meters for every kilometer in length. That doesn't sound like much, but with if it had such an incline, the canal will be 75 meters below the surface by the time it reaches the Rhine River.

In order to make this possible, the slurry stream needs pumping stations. Plans call for building three of these colossal water elevators. The pumping facility in Gelsenkirchen, which cost over €500 million ($638 million), is already under construction. To access the site, visitors walk down a wobbly staircase and pass Bulgarian iron benders as they descend 45 meters below the surface. Stainless steel studs project from the unfinished concrete walls.

Down here on the floor, the sewage will arrive as a large, murky jet of liquid, replete with cotton swabs, wet wipes and panty liners. Then the slurry will flow into huge centrifugal pumps that spin it to a level 35 meters higher up. The facility has an output of 13,300 liters (3,500 gallons) per second. It would take the pumps just 13 days to completely empty Berlin's Lake Wannsee.

Work is also rapidly proceeding aboveground. Bulldozers have already liberated many of the Emscher's tributaries from their concrete encasements, and greenery has been planted along 90 kilometers of waterway.

The "renaturated" area south of Dortmund seems almost idyllic. Until just a few years ago, the Phönix steel mill stood in this basin, and the Emscher flowed through a pipe running beneath it. Chinese investors purchased the plant and disassembled it right down to the last bolt.

Then the river liberators came and smashed the corset. The Emscher was once again allowed to meander. A lake is forming in the depression, and a residential area is being built on its shoreline. Yes, the Emscher is making a comeback.

The project has a budget of €4.5 billion. Stemplewski is the hero of the rehabilitation efforts, the man who drives the old blight out of Germany's industrial heartland.

Still, some residents say they are disturbed by the loss of their familiar stinky surroundings. In fact, some sentimentalists claim that barbeques in the area just won't be the same without a pungent whiff of "crap creek." But most of the locals are happy, and the project has yet to spark any public protests.

The project should be finished by 2020. But, even after that, the sewage managers will still have plenty to keep them busy. Since thousands of old tunnels and emptied coal seams have collapsed, some 300 square kilometers of earth have sunk in the old mining district. Troughs and basins have appeared out of nowhere -- some of them up to 30 meters deep.

Streams flow backwards into these depressions, and rainwater collects in them. Entire cities are threatened by rising water levels as the ground settles. To avert this looming disaster, hundreds of pumping stations have to operate around the clock -- and can never be turned off.

"That's our permanent legacy," says Stemplewski. "If we turn off the pumps, the Ruhr region will be flooded."