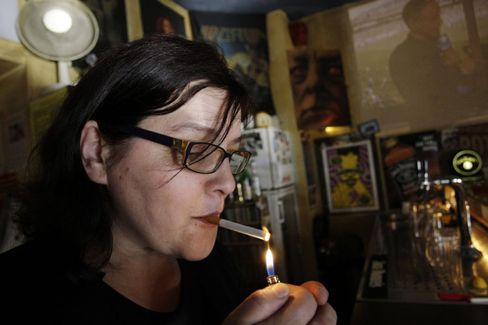 Sylvia Thimm lighting up in her bar in Berlin. Her complaint against the smoking ban was upheld on Wednesday.

Smokers in Germany can celebrate a victory on Wednesday after the country's highest court ruled that the ban on smoking in small bars should be overturned. The Karlsruhe-based Constitutional Court ruled that small one-room bars were at an unfair disadvantage as they could not establish separate smoking areas.

However, the victory could yet prove to be Pyrrhic. According to the ruling, were Germany to opt for a complete smoking ban in restaurants and bars -- instead of one allowing for separate smoking rooms -- then the ban would be constitutional. Court President Hans-Jürgen Papier said that the smoking ban would need to be completely redrawn by the end of 2009 -- and German states must then decide to either relax their rules to remove the unfair disadvantage to small bars or ban smoking entirely in all restaurants and pubs.

"Protecting the public from health risks -- whereby the legislator should also take into account passive smoking -- is of paramount importance to the community," Papier said.

Wednesday's ruling upheld a complaint lodged by the owners of two small bars -- one in Berlin and one in the city of Tübingen, in state of Baden-Württemberg -- and by the operator of a disco, also in Baden-Württemberg. The three argued that the ban put their businesses at risk. The ruling means that smoking will now be allowed in bars and restaurants of less than 75 square meters and in discos that are open only to adults.

"I now see light again at the end of the tunnel," said Uli Neu, who runs the Tübingen bar Pfauen, after the decision was announced. "My livelihood has been saved."

While smoking is banned nationwide in government buildings, each of the 16 states draws up its own rules on smoking in bars, restaurants and other public places. Wednesday's ruling only dealt specifically with the two states of Berlin and Baden-Württemberg, but it is likely to set a precedent for any future complaints from other states. Indeed, most German states have similar rules relating to the provision of dedicated smoking rooms.

Officials in Baden-Württemberg indicated that they would now look into establishing a ban with no exceptions. Monika Stolz, minister of social affairs for the state, said that the state would begin looking into such a law. "We feel validated, but we must make some adjustments," she said.

Sabine Bätzing, responsible for issues relating to drug abuse for the federal government, said "it is a verdict in favor of protecting non-smokers and against exceptions to the law."