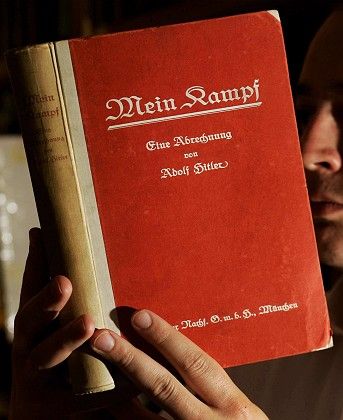 "Mein Kampf" cannot be published in Germany. However second-hand copies, such as this first edition, can be freely bought and sold.

It is arguably the most controversial book of the 20th century. Indeed, Adolf Hitler's notorious polemic "Mein Kampf" ("My Struggle") hasn't been legally published in Germany since the end of World War II. Many are concerned the frenzied tome could become a kind of scripture for right-wing extremists.

Now, though, a Munich historian has called for it to be republished in Germany -- as a pre-emptive strike against any neo-Nazis who might want to abuse the text for their own fell purposes.

Horst Möller, director of the Institute for Contemporary History in Munich, would like to see a "Mein Kampf" redux in the form of an academic edition with comprehensive footnotes. "As long as 'Mein Kampf' is not available in a carefully annotated edition, there will be no end to the oft simple-minded speculation about what is actually in the book," Möller said in an interview published Monday in the German newspaper Frankfurter Allgemeine Zeitung. "An academic edition could break the peculiar myth which surrounds 'Mein Kampf.'"

The book, written while Hitler was in prison for attempting to seize power in the 1923 Beer Hall Putsch, originally hit the presses in 1925. In it, the future dictator sets out his worldview and Nazi ideology, mixed with autobiographical detail and tirades against the Jews and other groups. The book is widely available in several countries, including the United Kingdom and the United States, but cannot be published in Germany.

Contrary to popular belief, the book is not actually banned in Germany. Instead, the copyright is held by the state of Bavaria, which took over the rights of the main Nazi party publishing house Eher-Verlag -- including the rights for "Mein Kampf" -- after the end of World War II as part of the Allies' de-Nazification program. As copyright holder, the state has since refused to allow the book to be published, on the grounds that it would promote right-wing extremism. The German Foreign Ministry has also repeatedly recommended that the book not be published, for fear of damaging Germany's image abroad.

Möller said he has repeatedly asked the Bavarian Finance Ministry, which controls the copyright, for permission to produce a scholarly edition, but has always been turned down. The Bavarian government has in the past taken legal action against attempts to publish the book in other countries, such as in Sweden in 1992 and in Poland in 2005.

But the state cannot maintain the status quo for much longer. In 2015, 70 years after the death of the book's author Adolf Hitler, the copyright will expire in accordance with standard copyright law -- at which point anyone will be able to publish "Mein Kampf."

"There will be enough publishers who will want to sell it then with the inevitable sensationalism," said Möller, who argues that it would be better to produce an annotated edition which explains why Hitler was wrong now, rather than wait for a flood of uncommented commercial editions.

However the Bavarian Finance Ministry is sticking to its guns, at least for now. In a statement given to SPIEGEL ONLINE Tuesday, the ministry said they would continue to block the publication of the controversial text: "In terms of managing the (Eher-Verlag) rights, the state of Bavaria has taken a restrictive position over the last decades," spokeswoman Judith Steiner wrote in an e-mail message. "Permission is not granted for complete works to be published, neither in Germany nor abroad, with the intention of preventing the distribution of Nazi ideology."

The statement adds that the state's position is based on "responsibility and respect for the victims of the Holocaust, for whom republication would always represent an affront ... to their suffering."

Unlike Möller, the Bavarian Finance Ministry does not believe that an annotated scholarly edition is useful. "It is already possible for historians who want to take a critical approach to the work 'Mein Kampf' to do so through the means of the annotated literature which has already been published," the statement reads.

Other academics are likewise unconvinced that re-publishing the book is desirable. "I think the idea is absurd," Wolfgang Benz, head of the Center for Antisemitism Research (ZfA) in Berlin, told SPIEGEL ONLINE Tuesday. "How can you annotate an 800-page monologue exposing Hitler's insane worldview? After every single line you would have to write, 'Hitler is wrong here,' and then 'Hitler is completely off the rails here,' and so on."

The argument that it is better to print a scholarly edition now than wait for the sensatationalist editions does not hold water, he feels. "The neo-Nazis and right-wing extremists will publish it anyway once the copyright expires," he says. "And no one will buy an academic edition for hundreds of euros when they can pick up a cheap paperback from a right-wing publisher for a couple of euros."

He points out that the book is freely available in its complete form in second-hand shops, libraries and on-line -- and many families still have copies. "Anyone who wants to read it can," he said. "The text itself has not disappeared."

Salomon Korn, the vice-president of the Central Council of Jews in Germany, also feels that the book should not be published until 2015, when it enters the public domain. "For me the key thing is to take the feelings of Holocaust survivors into consideration," he told SPIEGEL ONLINE. "It is unacceptable that such a symbolic work should be published with the state's stamp of approval while any survivors who suffered directly under the Nazis are still alive. It would create a very bad feeling for them."

He believes, however, that a scholarly edition should be prepared -- but closer to the 2015 deadline. "It should be brought on to the market six months before the copyright lapses," he says.

Korn is not worried about the effects of the book -- which he describes as "barely readable" -- when it does become available. "I can't see it having much influence," he says. "It's so badly written, with such a mishmash of illogical ideas, that any sensible reader would simply throw it aside."