A black politician in the eastern German state of Thuringia is being harassed by members of the far-right National Democratic Party of Germany (NPD) -- but says he refuses to be intimidated. 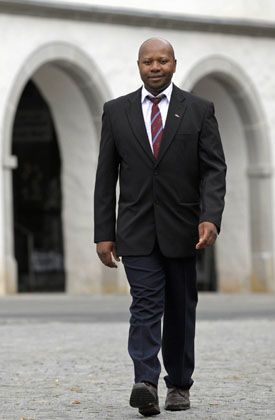 CDU politician Zeca Schall says the far-right campaign against him is just electioneering.

Earlier this week, the NPD released a press statement suggesting they would like to hold "direct talks" with Zeca Schall, a member of Angela Merkel's Christian Democratic Union (CDU). Schall's picture appears next to that of Dieter Althaus, the current state premier of Thuringia, on CDU posters put up in preparation for state elections on Aug. 30. The NPD also described Schall as the CDU's "token nigger."

In the statement, the NPD also said they would like to "encourage" Schall, who came to Germany from Angola in 1988 and who has been a German citizen for the past four years, to return to his homeland and start a new life there. They said that a local should be doing his job. Schall is responsible for issues of integration -- that is, issues involving immigration and multi-culturalism -- for the CDU in Thuringia.

As a result of the NPD's statement and what were construed as barely veiled threats, local police have been posted near Schall's house in his hometown of Hildburghausen since Wednesday. Despite this, members of the far-right scene, including NPD members, tried to approach Schall's house on Wednesday but were turned away by police.

On Thursday, the public prosecutor's office in Meiningen announced that it had launched an investigation into the NPD's actions, on suspicion of racial hatred, defamation and attempted coercion.

In an interview with SPIEGEL ONLINE, Schall spoke of his shock at the incident and described it as an attack on German democracy.

SPIEGEL ONLINE: In a statement to the media, the NPD has said that they want to speak with you and "encourage" you to go home. Have they done this?

Schall: Actually they were already here, in a big car with a loudspeaker, about 20 meters (66 feet) from the front door of my home. But luckily, there were police posted in front of my house and they redirected them. I'm happy that someone is guarding me -- it makes me feel safe. And it looks like the police are going to be in front of the house until the election.

SPIEGEL ONLINE: What was going through your head as you read that press release?

Schall: At first I was shocked. I've never encountered anything like this before. I see this as not just an attack upon myself, but as an attack upon the whole of the CDU and on all of the forces of democracy in Germany.

SPIEGEL ONLINE: Are you frightened?

Schall: No, I am not. I am fine. I have to be a little more careful and that is a strange feeling -- but I'm coping and I'm just getting on with my work.

SPIEGEL ONLINE: It sounds as though you are used to getting these kinds of threats from the NPD.

Schall: Not at all. Up until now I have been spared these sorts of threats and this kind of hostile behaviour. I never even expected something like this. I think it's actually electioneering. The NPD simply wants to get attention ahead of the election.

SPIEGEL ONLINE: After this incident, will you be happy to have your picture put on election placards again? Or does this seem risky to you now?

Schall: Not at all. I won't be intimidated. I am responsible for integration in the state and, just like Dieter Althaus, I have to be there for the people of this state. That's why my picture is next to his. People are happy that I am on the poster.