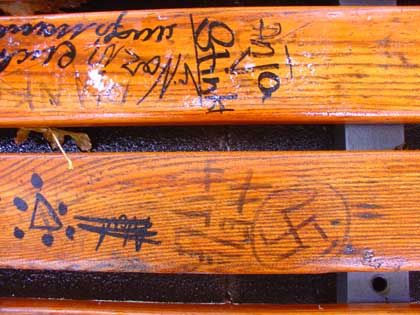 A Nazi swastika daubed on a bench in the town of Mügeln.

The Indian government has demanded a rigorous investigation into the attack on eight Indian menby a mob of at least 50 Germans shouting "Foreigners out" in the eastern German town of Mügeln, near the city of Leipzig, on Saturday night.

"We expect the culprits to be caught quickly," India's ambassador to Germany, Meera Shankar, told Berliner Zeitung newspaper. Earlier she asked the German government "to take measures to tackle this issue and prevent such events from occurring in the future," a spokesman for the Indian foreign ministry said.

The attack has triggered fresh public debate about far-right extremism in the formerly communist east of Germany, which has seen a string of racist assaults since unification in 1990. Politicians and business leaders have expressed concern that the country's reputation abroad may have been hurt and that foreign investors be deterred from coming to Germany.

German parliamentarian Sebastian Edathy, who heads the Bundestag's domestic affairs committee, said: "People of dark skin color are far more likely to become the victim of an assault in Eastern Germany than they are in Western Germany."

The eight men were attacked by a mob of around 50 Germans at a street festival in the early hours of Sunday in the small town of Mügeln in the Eeastern German state of Saxony. The trigger for the violence was a brawl on the dance floor in a party tent shortly before 1 a.m., police said. The reason for the brawl was not yet clear.

The Indians left the tent where the dance was being held but were then attacked by a number of Germans who chased them across the town's market place until they took shelter in a pizzeria run by an Indian. The owner let them in, but the mob tried to kick in the doors of the restaurants as a large crowd looked on. The restaurant owner's car was also seriously damaged.

Police arrived in force after one of the men called them from inside the restaurant, and the mayor of Mügeln, Gotthard Deuse, has been criticised for claiming that the attack wasn't racially motivated. Local business leaders were also shocked at the incident, which has drawn nationwide media coverage.

"These events don't just cast a negative light on Leipzig as a business location, but also on Saxony and the whole of Eastern Germany," said Thomas Hofmann, head of Leipzig's chamber of commerce. He said Germany's economy would be hurt if the country doesn't get to grips with the racist attacks.

The Central Council of Jews in Germany accused the government of lacking a national plan of action to combat the far right. Stephan Kramer, general secretary of the Council, said foreigners were evidently in danger in the east of the country. "They should be warned not to live in certain regions and towns of Eastern Germany," he told Netzeitung. "That not hysteria, that's a bitter fact," he said. "Yesterday it was colored people, today it's foreigners, tomorrow it will be lesbians or homosexuals or perhaps Jews."

Georg Milbradt, the conservative mayor of Saxony, where Mügeln is located, denied that the region was a no-go zone for foreigners. "We should wait for the results of the investigation into what happened in Mügeln," he told SPIEGEL ONLINE. "Of course one mustn't play down such events but one shouldn't immediately label every dispute between Germans and foreigners as xenophobia."

No one has been charged with the attack so far. Some 200 left-wing radicals demonstrated against the far right in Mügeln on Tuesday.