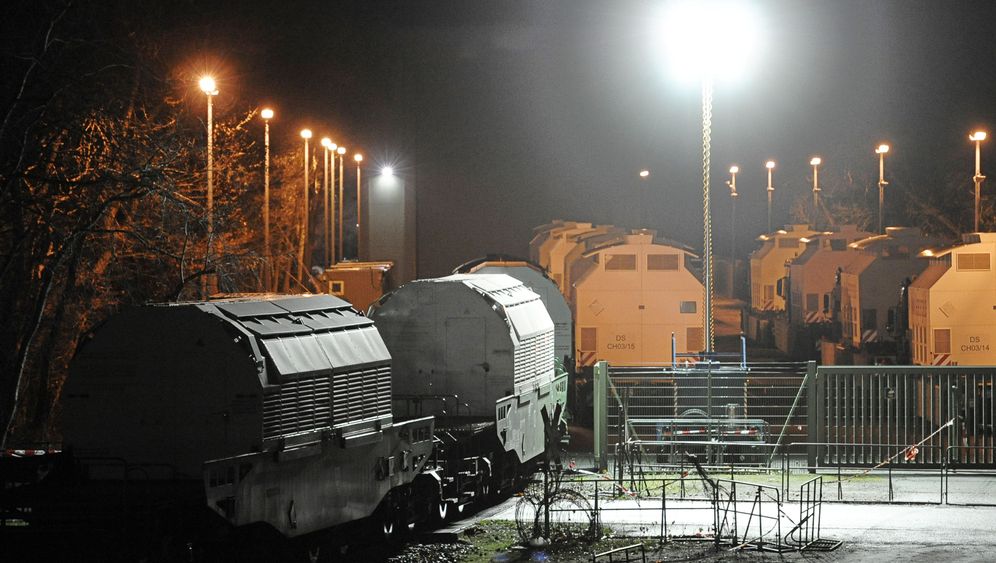 Photo Gallery: Chained to the Tracks

Thousands of anti-nuclear protesters have stalled a train carrying radioactive waste from France to Germany. A string of clashes and obstructions has made the journey the slowest one since the annual shipments of radioactive waste began in 1995.

The controversial cargo is headed for the Gorleben temporary storage facility for nuclear waste in northern Germany. On Monday, the 11 containers are to be moved by crane to a special transporter which will carry them the final 20 kilometers (12 miles) by road.

The so-called Castor containers -- the acronym for the casks used for the transport and storage of the radioactive material -- have long been the subject of protests by Germany's vocal anti-nuclear lobby. Demonstrators argue that the waste containers and the interim storage facility are unsafe. Germany, meanwhile, has still not reached a decision on where the waste will be permanently stored.

The shipment, the first since Japan's Fukishima nuclear disaster, faced large protests in France where activists damaged the tracks to try and halt the progress of the cargo.

Thousands of people in Germany also interrupted its journey on Sunday and Monday, forcing it to proceed at a snail's pace, covering 1,200 kilometers (746 miles) in 109 hours.

In a few cases, the protests on Sunday weren't as peaceful as planned. In one area of forest along the route, the situation intensified between masked protesters and police. Security officials were attacked by stones and firecrackers and barricades were burned. "It is an intensity of violence we don't normally know around here," said Dietmar Schilff, the head of the state chapter of the police officers' union. Police confronted protesters with water cannons and batons, sparking serious criticism.

Claudia Roth, the national co-chair of the environmentalist Green Party, called the police actions "absolutely overexcessive," saying they were an "attack on democracy." Roth herself participated in the protest.

But the police union denied the allegation. The head of the national chapter of the police union, Bernhard Witthaut, said police had acted appropriately and made efforts to deescalate the situation. "However, they also have the task of ensuring the safe transport of the containers to the temporary storage facility," he said.

On Sunday, more than 200 people were reported injured in the protests. Around 160 protesters suffered after being struck by batons or being subjected to tear gas, the protest organizers claimed. The police, for their part, claimed that 51 security officials had been injured in the deployment. Officials claim that 16 police cars were damaged and several arrests were made.

The weekend protests triggered considerable delays of the shipment. Hundreds of officers removed protesters from the rail lines near the town of Dannenberg in Germany on Sunday, temporarily detaining many demonstrators who had refused to leave. Some activists chained themselves to a 600 kilogram (1,323 pound) concrete pyramid they had built on the rails.

In the southwestern city of Metzigen, protesters ignited a barricade of car tires during three days of violent clashes between police and demonstrators in the city.

Anti-nuclear protesters have already gathered to block the road to Gorleben, in the western German state of Lower Saxony. In total, some 20,000 German police have been mobilized.