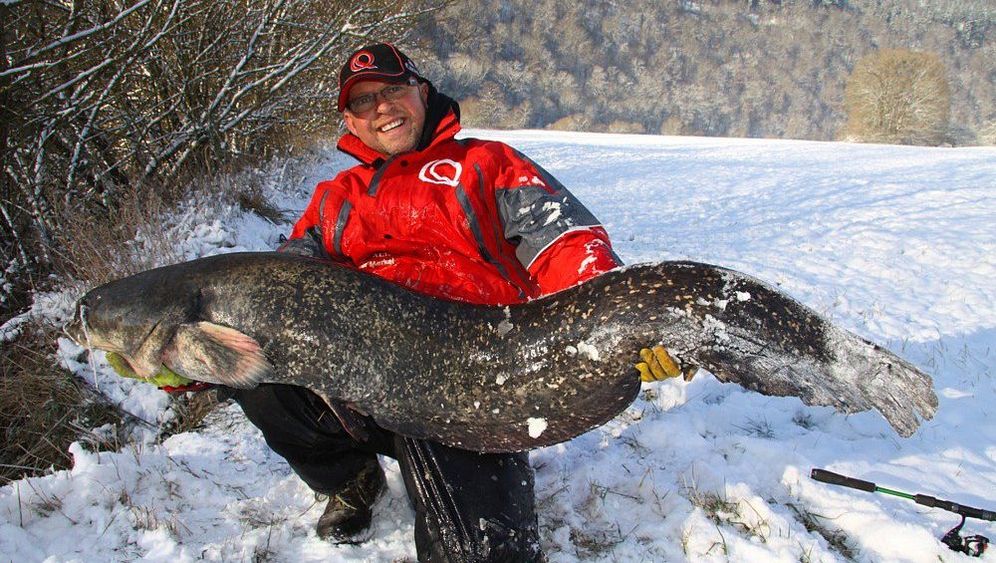 It was 3 o'clock in the morning when the wels catfish bit. Peter Neumann fought with the beast for a full hour before he finally released the hook from the enormous mouth and threw the fish back into the Rhine river. "What would you do with such a huge animal?" asks Neumann, an expert on the wels catfish, a large species found across Europe. They don't taste particularly good, and they generally have very little usable meat. But catching the fish as a sport is becoming more and more popular. Many anglers are discovering the opportunity to snag some of the impressive specimen right in their own backyard.

This opportunity is greater than ever before. The population of wels catfish, also known as sheatfish, is rapidly expanding in Germany. The fish can grow up to be three meters (10 feet) long, weigh up to 150 kilograms (330 pounds) and live as long as 80 years. Fishermen say the Wels population has been increasing at a swift pace, and researchers are puzzled by the sudden boom.

The wels catfish itself is full of secrets. No one can say exactly where it came from. And very few have had the privilege of setting eyes on it -- only those fishermen who are lucky enough to have their bait land right in front of the fish's nose, deep in the dark waters where it spends its whole life sitting in muddy holes and avoiding any unnecessary movement.

Every year the Rhine Fishermen Society uses electrofishing to monitor the populations of the various fish. But the current produced by electrodes in the water doesn't reach the depths where the wels catfish reside, leaving fishermen only guessing about the figures. Part of the problem is the fishermen themselves, according to Stefan Staas, head of the Rhine Fishermen Society. "Less than 1 percent of anglers in the Rhine fill out the papers documenting their catch," he complains. "These figures are all that we have."

Fourteen Tons of Catch in a Year

Regardless, the meager figures that do exist document an impressive development. In the 1980s there were few reports of wels catfish catches. In 1996 there were 656 kilograms registered, a figure that jumped to 1,282 kilos the next year. The most recent figures come from 2010, when fishermen caught more than 14 tons of the fish from the Rhine.

"The wels catfish never played much of a role in our waters," Staas says. "That has changed." He suspects human activity may be behind the boom, in the form of uncontrolled releases. Manuel Lankau, biologist with the Westphalia Fishermen's Association, agrees. "It's highly possible that the wels catfish has spread because of fish stocking policies, and that in recent years the diverse populations have coalesced."

The warmth-loving fish is finding an ideal habitat in the Rhine, where temperatures are steadily rising. "The introduction of power plants on the river has heated things up," Staas says. Global warming has also played a role in the rising temperatures.

The wels catfish lays 25,000 eggs in one clutch. After three years, the young fish are ready to breed, and after another three years they typically grow to be a meter long. While the fish naturally spawns only once every 10 years, the summer temperatures in the Rhine apparently increase the capacity to breed each year. Still Lankau, the biologist, says he wouldn't call the fish a menace. "The wels catfish will not deprive itself of its own basic food source by eating up all the other fish," he says.

The opinions of fishermen on the wels are diverse. Many are excited about the growing population and are upgrading their equipment -- in order to catch the wels catfish, you need an extremely heavy fishing rod and large pieces of bait. But many traditional fishermen hate the wels. As soon as it appears on the scene, populations of native species seem to drop.

Recently, another newcomer has emerged in the Rhine: The goby, hardly the size of a finger, was first found in the river in 2008 and has expanded similarly to the wels catfish. The Rhine Fishermen Society is calling it "one of the most dramatic changes in the Rhine fauna that has ever been documented." The wels catfish love gobies. The tiny creatures like hanging out on the riverbed, making easy prey for predator fish. Whether the goby is partially responsible for the wels catfish expansion is still unclear.

Gottfriend S. has been fishing for 40 years in the Sieg, a tributary of the Rhine in the western state of North Rhine-Westphalia. He shrugs as he points to an empty bucket. "You used to always find trout here, but the wels catfish is wiping everything out," he says. His fishermen's association this year got rid of all its closed seasons for catching the catfish, calling on its members to target the fish and not throw them back in the water. But that's not always easy. Gottfried S. recently had to call in the help of a local farmer to help an exhausted fisherman pull a giant wels catfish out of the water. They needed a tractor to get the job done.

Its enormous size makes the wels catfish an ideal candidate to fill up newspapers desperate for good stories in the notoriously slow summer news cycle. "Gigantic Fish Grabs 14-Year-Old in Swimming Lagoon" read one headline last August from the website of the magazine Focus. The youth's mother confirmed the incident over the phone: "The thing pulled her underwater, thank God she was able to get free." The girl's father sought revenge and tried to catch the fish himself. "My daughter could defend herself, but were an animal like this to grab hold of a child, it wouldn't stand a chance. These giant creatures have to go!"