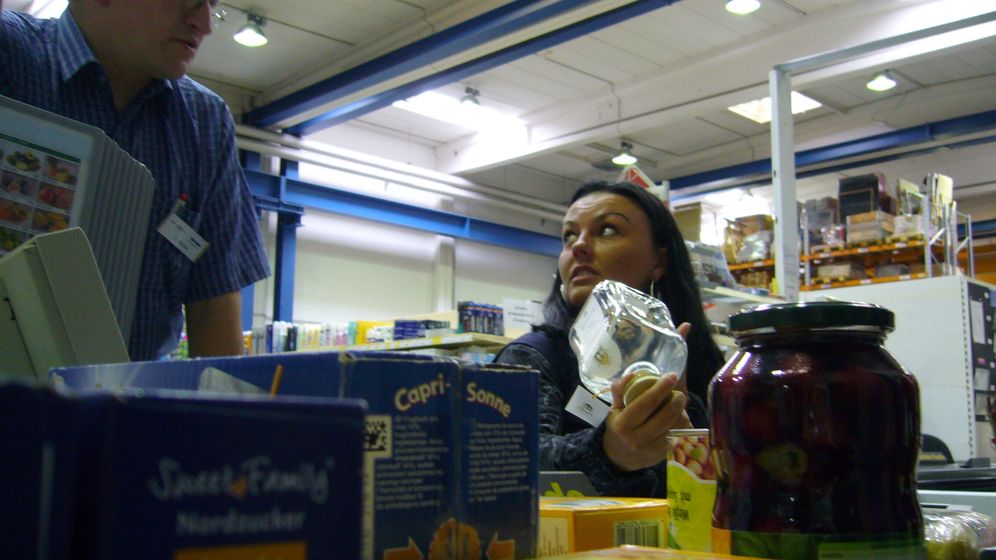 The checkout scanner stalls over a bottle of plum schnapps. The woman behind the cash register looks questioningly at her teacher, Mr. Rothe, who instructs her which buttons she should press. The checkout receipt says the schnapps costs €49.99, even though the bottle is empty.

The man who bought the empty bottle is Markus Repschinski, a 28-year-old who has filled his shopping cart from supermarket aisles lined with fake products, inflatable cheese and empty plastic containers as well as some 6,000 real food stuffs.

Repschinski has the words "Real Life Training" written on the back of his vest. And that is the crux of this simulated supermarket and warehouse, the first scheme of its kind in Germany. Here, long-term unemployed people get to experience supermarket work first hand. The idea is that the "workers" take part for almost 40 hours each week for a period of between six and nine months. They are supervised by social workers and five group leaders.

Today, like every day, Repschinski spends more money than he has to live on for months. The former warehouse worker now lives on €359 euros ($484) from the so-called Hartz IV benefit, which is the deeply reduced welfare payment the government gives to those unemployed for more than a year. But here in the training supermarket he only handles play money, miniature euro bills and plastic coins.

This is Germany's biggest toy supermarket by far, paid for by the job agency in charge of helping Hartz IV recipients back into work. The reintegration of Germany's long-term unemployed into the work force is an expensive problem for Germany, where several million people receive the Hartz IV benefit. No one wants to say exactly how expensive the supermarket program has been. But Rainer Westerwelle, managing director of the training center, confirmed that the sum will surpass €1 million and could rise into the single-digit millions, saying: "it is not possible for less." In Germany, job center staff send unemployed people to do courses in everything from filling out job application forms to driving a forklift truck and using powerpoint. There has even been a speed-dating session with potential employers. But no one knows for sure what impact this approach has. What is more certain is how much it costs: The Federal Labor Agency pays €6.6 billion a year for the retraining of Hartz IV recipients.

In the words of the German employment agency this training is "a realistic experience with genuine articles." But you get no qualification, just a certificate of attendance, drafted like an employment reference. Failure to attend the training course is punished with sanctions, like a reduction in benefit payouts.

Since October 2009 there are many people, like Repschinski, playing shop and taking part in training courses. A number of them see the program as plain silly: "pure nonsense," "humiliating," are among the words used by participants. "This stuff can also be taught to a baboon," a smoker says during a break. Many do not want their names to be printed, while some do not even tell their friends and families they are taking part in the course. Day after day, they sort goods, drive forklifts through the warehouse, take orders and push packed shopping carts from one room to another.

But its organizers refute the complaints: "You can never please everyone," says project manager Ulrike Kügler, adding that some people refused to take part at first, but soon got involved. She said she there was less dissatisfaction among those working in the supermarket training courses than with other measures Germany uses to retrain its Hartz IV recipients.

Some taking part in the novel scheme say it beats sitting around at home. Regla Ketty Morales Leverenz, 28, from Cuba, said that she has learned a lot and has already been invited to interviews. Karolina Sieg, 26, says she had already secured an apprenticeship job in retail, starting this summer.

At the checkout, a man is waiting to pay for his purchases again. Sieg, working as a cashier, has forgotten to look into the security mirror on the wall to check and make sure that the customer hasn't forgotten or hidden any products in his shopping cart. The customer says he wants to pay by card -- a decision which avoids the need for the cashier to fumble for the right change. There's not credit card machine here, so the cashier must simply write the amount down on a list.

"This is a good way to inspire people to work," says project manager Kügler. She says she is strict, throwing out those who fail to take part.

And the results? Of 161 people who have so far been registered to take part in the simulated supermarket, only 14 have gone on to work for temporary employment agencies in the warehouse industry and none have obtained jobs in the retail trade. But project organizers stress that the project will need to run for two years before it can be fairly evaluated. They say their goal is not only to boost the number of people getting jobs, but also help give people the confidence and courage they need to accept a job. They speculate that the pilot project may be taken up by other German states. And most of all they are proud that the work environment is realistic: "This is not a place full of hot air," said CEO Westerwelle.

And in the meanwhile, 'workers' continue to buy and sell water-filled wine bottles and inflated packets of cheese.