They were thought lost for over 80 years. Scenes from Fritz Lang's famous silent film "Metropolis" have now been rediscovered. Germany's Die Zeit newspaper revealed on Thursday how Paula Felix-Didier, the director of the Buenos Aires film museum, had made the discovery. She found the original version in the museum's archives after hearing reports about the unusual length of the film stored there. She traveled to Berlin with a copy of the film this week and showed it to film historians, who were quick to confirm that this was indeed the original long lost version of "Metropolis."

According to these experts the 16-millimeter negatives from Argentina enrich the fascinating and controversial 1927 work in ways that could only be guessed at previously. This new find could be the beginning of a new chapter in the checkered history of what is probably the most famous silent film ever to come out of Germany -- a film that started out as a huge flop but is now regarded as an iconic classic.

While many people will be familiar with the defining scenes from Lang's film, they dont necessarily know the underlying plot. A futuristic city is ruled by Joh Fredersen, who along with the rest of the elite, lives high above Metropolis, while the workers toil away underground. Class relations are thrown into chaos when Fredersen's son Freder, played by Gustav Fröhlich, falls in love with the workers' leader Maria, played by Brigitte Helm. Meanwhile the inventor Rotwang has created a steel robot who he has made to look like Maria. This fake Maria then instigates the workers to abandon their machines and to flood the city. Freder and Maria step in and manage to save Metropolis and the capitalists and workers are reconciled.

"The most marvelous book of images ever composed," was how Spanish filmmaker Luis Bunuel described this early science fiction story. It was a film whose futuristic look and distinctive design would later have an unsurpassed impact on popular culture. However, Buneul had nothing but scorn for the film's story line and the futuristic vision produced at unprecedented expense. "Anyone who considers the film as a discrete story-teller will find 'Metropolis' to be a bitter disappointment. What we are told here is trivial, bombastic, pedantic, of an overwhelming romanticism."

Bunuel's ambivalent verdict is just one of the many prominent opinions that have been expressed about the film over the years. In his famous book "From Caligari to Hitler," the film theorist Siegfried Kracauer criticized the "mass ornament" in Lang's opulent use of extras as evidence of a totalitarian world view. The naïve fraternization between the workers and the rulers at the end of the visually stunning destruction scene has often been understood as a kind of proto-fascist apology for the leadership principle, a view which was backed up by the fact that the film's screenplay writer Thea von Harbou had Hitler sympathies.

The German Film Institute has published an overview of these and other aspects relating to the controversies surrounding the film: "Back to the Future: Fritz Lang's 'Metropolis' Over Time."

However, almost every musing about this legendary film project, which Berlin's Ufa film studio had hoped would give Hollywood a run for its money, were severely limited by the fact that they were not based on the original version of the film. "Metropolis" had been radically cut after a disappointing premiere, with the studio ordering that almost a quarter of the film be left on the cutting room floor. It was the loss of these scenes that motivated following generations of archivists and film historians to carry out painstaking searches for clues. 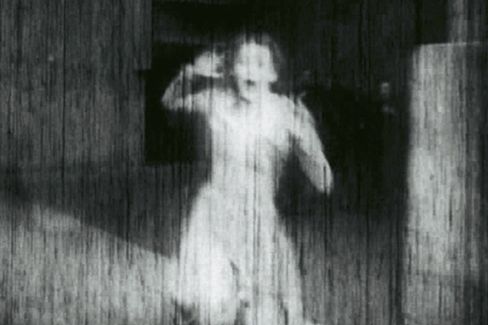 One of the long-lost scenes from "Metropolis"

In the 1980s the director of the Munich Film Museum, Enno Patalas, was responsible for the first restoration of the film. Then in 2001 Martin Koerber carried out the first digital restoration for the Friedrich-Wilhelm-Murnau Foundation in Wiesbaden, the holder of the rights to the film. This authoritative version is based on the Munich Film Museum version combined with material in the film collection of the German Federal Archives.

Patalas and Koerber were among those experts that Paula Felix-Didier, director of Buenos Aires' Museo del Cine, invited to view her discovery in Berlin. As Karen Naundorf recounts in Die Zeit these were negatives which had been sent to Argentina in 1928 and ended up in a film critic's private collection there.

Many decades later this original version has finally come to light. Although the new material is in a terrible condition, according to the first appraisals by the German film historians, including Rainer Rother, the director of the Deutsche Kinemathek Museum in Berlin, the newly discovered scenes give a surprising insight into the characters' motivation. They finally give "Metropolis" a coherent story-telling rhythm, whose absence was often criticized. For example, characters who were practically extras in the shorter version, such as the spy Schmale or Josaphat, Freder's friend, actually had significant supporting roles and the original dramaturgical concept, which before could only be reconstructed using textual sources and photographs, is now apparent on film for the first time since 1927.

The challenge facing the archives and film institutes is enormous. The Murnau Foundation now sees itself as "responsible, along with the archive in Buenos Aires and our partners for making the material available to the public," Helmut Possmann, director of the Murnau Foundation, told Die Zeit. The head of the board of trustees, Eberhard Junkersdorf, sees this as an historic opportunity. "With this sensational discovery the Murnau Foundation is now in a position to comprehensively restore the film. This will finally accomplish the goal of getting as close to Fritz Lang's masterpiece as possible and presenting it to the world."

It seems film history is still capable of being rewritten. One thing is certain -- the future of "Metropolis" is far from over.

David Klingers is the managing editor of filmportal.de, the Web site of the German Film Institute.