The mayor of Duisburg, Adolf Sauerland, who was publicly vilified for refusing to resign after the Love Parade disaster in which 21 people were crushed to death in his city in July 2010, was voted out of office on Sunday in a local referendum.

More than 129,000 citizens backed a motion requiring the mayor to step down, well above the required minimum of 91,478 which would have been a quarter of the registered electorate of the industrial western city. The turnout was 41.6 percent.

Some 21,500 people voted for him. It was the first time in the history of the state of North Rhine-Westphalia that a city held a vote to rid itself of its mayor before his term was over. His term was due to end in 2015.

Sauerland, a member of Chancellor Angela Merkel's conservative Christian Democratic Union, was heavily criticized for refusing to take responsibility for mistakes in safety planning that led to the accident.

A previous bid to force him out failed in September 2010 because opponents couldn't muster the necessary two-thirds majority in a vote by the city council. Critics then gathered enough signatures to force the election. The city will have to hold elections for a new mayor within six months. In the meantime, senior city officials will carry out his duties.

Facing the press in Duisburg's town hall on Sunday night, Sauerland said he was surprised at the result. He said he had been "pretty sure" that the outcome would be different due to the "many successes" during his term.

Facing jeers and whistles, he conceded that his term in office would always be associated with the tragedy. "I will have to live with that."

'Chance For a Fresh Start'

The spokesman for the local initiative that collected signatures for the vote, Theo Steegmann, said: "This will restore political peace. The city can be a little proud of itself again."

Regional politicians said they were relieved at the outcome. "This clear decision offers the chance for a real fresh start for Duisburg and the people in this town," said the general secretary of the state's ruling center-left Social Democrats (SPD), Michael Groschek.

"The outcome is the verdict on Sauerland's unwillingness to take political and moral respoinsbility for the Love Parade disaster," said Monika Düker, the regional co-leader of the Green Party, junior coalition partners to the SPD in the state.

Sauerland, 56, had steadfastly refused to resign, saying he had not formally approved the Love Parade, and that authorization had come from city officials below him.

A total of 541 people were injured in the crush.

Critics said Sauerland should have taken responsibility for the accident, that he had made mistakes in allowing the event to go ahead and failed to deal appropriately with the relatives of the dead.

Sauerland stayed away from a memorial service to the victims because the relatives didn't want him to attend. He didn't visit the unveiling of a memorial because of strong public pressure on him to stay away. And he was told not to sign Christmas cards the city sent to the parents of the dead.

The police and public prosecutors are still trying to establish who was responsible for the disaster. There is no end in sight to the investigation which is targeting 17 people, including 11 members of the city authority.

There was no investigation against Sauerland. But he has been the most controversial person in Duisburg ever since the tragedy. Abuse has been hurled at him in the street and he needed police protection whenever he attended public events. He was often met with jeers and whistles when he appeared in public. In November 2010, a man campaigning for his dismissal squirted ketchup in his face while he was holding a speech.

Sauerland will receive 71.75 percent of his pay until the official end of his term. After that, he will receive a monthly pension. 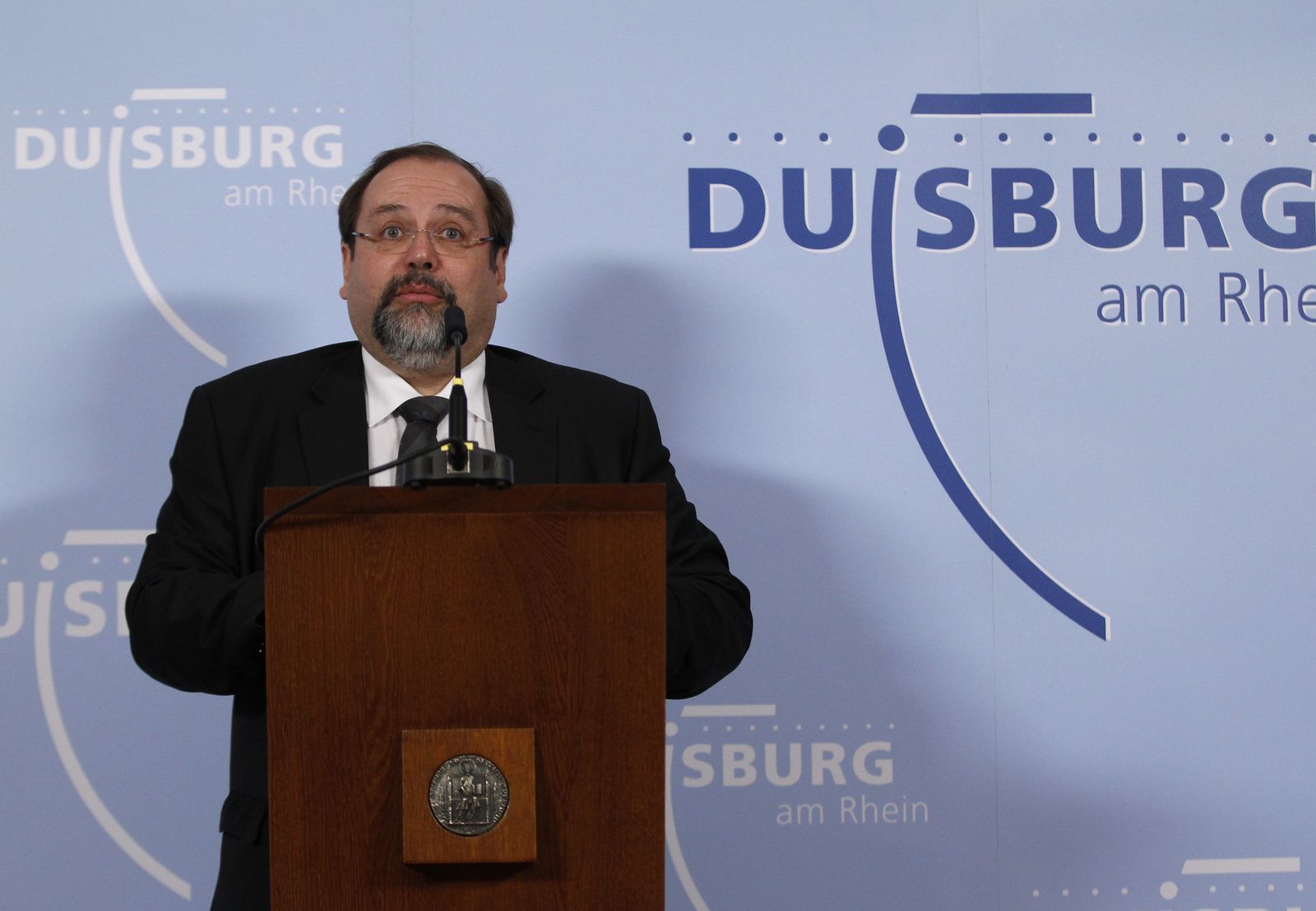 Duisburg's mayor Adolf Sauerland responding to the vote that ousted him from office.