As painful as it is to write this, one cannot support an autocratic system, capital punishment, the arrest of critical journalists and the jailing of the political opposition and then turn around and complain that you are not accepted in Germany as a German. That's unacceptable. It shows that integration in Germany has failed -- and that it isn't just the Germans who are to blame for that.

A clear majority of Turkish voters living in Germany cast "yes" ballots for Erdogan's autocratic presidential system. In Turkey, the result was so close that it's possible that votes from Turks living abroad may even have proven decisive. Despite living in democracies and in freedom and safety, these people have essentially voted to eliminate democracy in Turkey.

Interestingly, many Turkish-Germans are now accusing me of "just trying to please the Germans," with my own criticism of Erdogan. I'm receiving hundreds of such emails right now. What they fail to recognize is that I am a German. They seek to deny my identity as a German in the same way that the right-wing populist, anti-immigrant Alternative for Germany (AfD) party and other right extremists do. In doing so, they also reveal their greatest problem: Namely that they constantly claim to be Turks and Germans, but that they have never truly felt themselves to be German and they haven't sought to claim or ensure their right to a German identity.

They haven't pushed back against those who have always dismissed them as "guest workers" or "migrants" who "should go back to where they came from." But it is precisely those individuals whom they should answer, self-confidently: We're also German -- we help shape the country, we participate in society, we help mold German -- that is, our -- society, because we like Germany, even if it isn't perfect. There is much to criticize in Germany and we also do that. But we value democracy and the fact that we even have the possibility of criticizing it without landing in jail.

A Vote for Autocracy

Instead they voted for autocracy in Turkey. Just imagine: The cities of Istanbul, Ankara and Izmir all voted "no" on the referendum, but Berlin, Hamburg and Munich -- in fact all 13 cities in Germany where Turkish-Germans eligible to vote could cast ballots -- voted "yes."

In the course of my reporting, many have told me that they had chosen to vote in favor of the presidential system because they felt they had been poorly treated in Germany. And that they wanted to vote "yes" because they knew how critically the majority of Germans view Erdogan and his plans. Their arguments are worth listening to. The lack of a culture in Germany that truly welcomes its immigrants contributed to a situation in which people who have spent their entire lives in Germany, who were born here, nevertheless still feel like foreigners. As a country, this should have us considering new ways to integrate people.

Still, with all due respect, it is by no means required that we show understanding for the bizarre attitudes on the part of many Turkish-Germans and their defiant election behavior. They shot themselves in the foot in their quest for revenge. The thinking behind it is pretty odd indeed.

But ultimately, these voters have damaged themselves with the vote because they will now have to justify their political attitudes for some time to come. They also put those who voted "no" on the spot because it will also place them in the position of having to defend themselves. But there is little to justify or defend. Despite this, some are trying to muster up understanding for "yes" voters in ways they could never possibly fathom for a party like AfD.

So how can it be that, as the members of the democratic society that they wish to be part of, they can correctly criticize right-wing extremists but at the same time accommodate an Islamist autocrat and stab people in Turkey in the back given that the "yes" camp only narrowly won and with the help of a lot of money and staffing and the massive oppression of its opponents? The answers to those questions remain a mystery.

But Turkish-German "yes" voters will ultimately need to answer these questions, ones that we should all have in our minds right now. 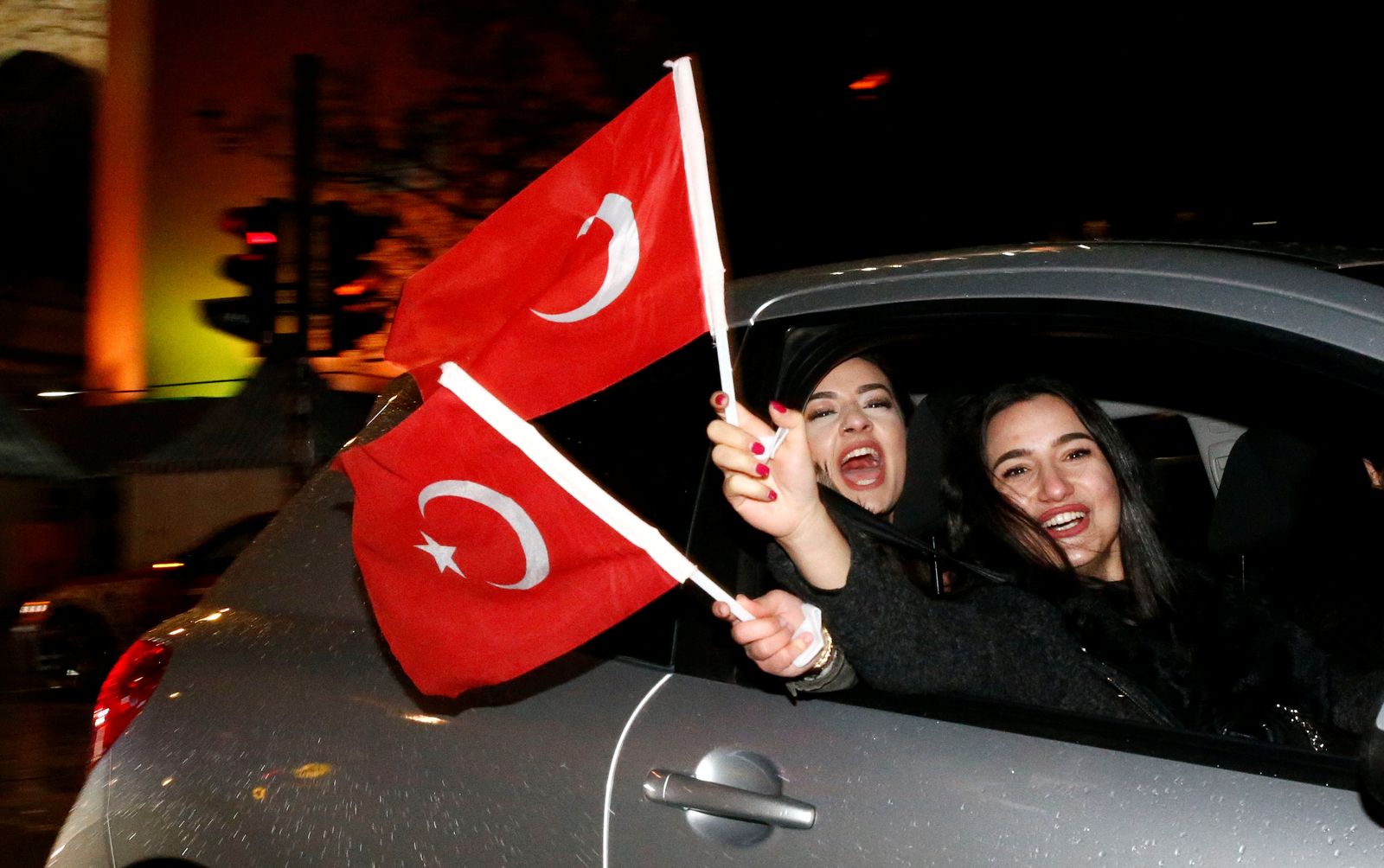 Erdogan supporters in Berlin after the vote