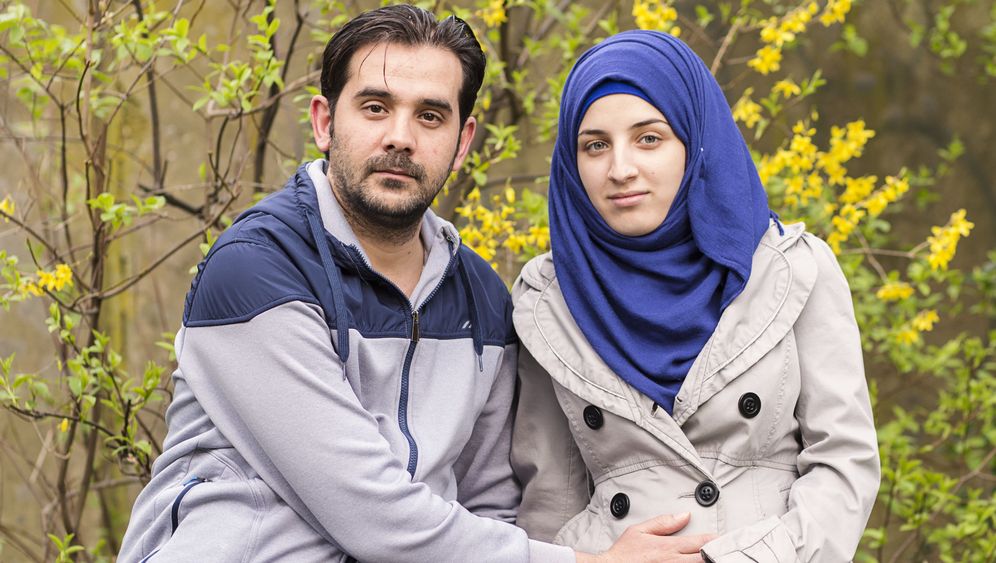 Diala Hasan was surprised by her attacker in the kitchen of the refugee hostel where she is staying. She was cooking rice with peas when a fellow resident from Macedonia suddenly appeared. He commanded her to "come to my room." He then grabbed the young woman's face with his thumb and index finger, pressing his body against hers. Hasan resisted and screamed. She was only able to free herself with great effort.

A few weeks after the attack, Hasan, a 17-year-old high school student from Damascus, is sitting on a stool in the asylum-seeker hostel in Bergisch Gladbach, a city located 15 kilometers (9 miles) east of Cologne. She is fiddling with two hand-made bracelets on her right arm. Her voice shakes as she talks about her life in the shelter. She says that she and her two sisters, nine-year-old Hala and 22-year-old Israa, have been repeatedly stared at and groped, and that male residents have hissed obscene comments at them. It happens in the courtyard, in the kitchen and in the hallways. One man kept coming into their room while she was sleeping.

Hasan doesn't understand why the shelter administrators have done nothing about the assaults. Following the attack in the kitchen, police officers showed up at the hostel, but they only repeated what the guards had already said, Hasan says: Sorry, but without proof we can't help you. It is a sentence that female refugees in Germany often hear.

More than 440,000 people applied for asylum in Germany last year, with roughly a third of them being women and girls. Their number has increased in recent months. According to a February estimate by the German Foreign Ministry, up to eight of 10 refugees on the Balkan Route were women and unaccompanied minors in the weeks preceding the report. They were hoping for a life in safety but were, like Diala Hasan, frequently disappointed. "Nobody helps us," she says. "We are completely alone."

The German government was unprepared for the extremely rapid rise in the number of asylum-seekers coming to the country in 2015. States and municipalities were forced to quickly find shelters for the new arrivals. Gymnasiums were emptied out to make room and former building supplies stores were hurriedly modified. More recently, the number of refugee arrivals has dropped significantly, providing the government with an opportunity to focus more on integration.

But Chancellor Angela Merkel's governing coalition is failing to provide protection to exactly those people who need it most: women, children and minorities who have fled their homes. The government's commissioner responsible for the issue of sexual violence against children, Johannes-Wilhelm Rörig, is currently dealing with 40 cases of sexual assault on children inside refugee hostels in recent months, including cases of rape and even genital mutilation performed on a small girl. The number of unreported cases, Rörig fears, is likely much higher: He says that many refugees are afraid of approaching the authorities due to worries that doing so may adversely affect their asylum applications. "How many cases are still needed before something changes?" he asks. "Fifty? One hundred? A thousand?"

Back in 2013, the EU issued a directive to member states requiring them to "take into consideration gender and age-specific concerns and the situation of vulnerable persons in relation to applicants within the premises and accommodation centers." The directive also specifically mentioned "appropriate measures to prevent assault and gender-based violence" in addition to access to "psychological treatment or care." Thus far, however, the German government has been ignoring the directive.

It's not entirely for lack of trying. Last fall, the Family Ministry in Berlin proposed the inclusion of protections for women, children and minorities in a draft law addressing refugees and asylum-seekers in Germany. But the Interior Ministry, under the leadership of Thomas de Maizière, a member of Merkel's Christian Democrats, removed the passage prior to the law's approval early this year. The passage was allegedly struck so as to save German states from extra work. But Interior Ministry sources say the real reason was to discourage further refugees from coming by way of more restrictive asylum policies.

It is "despicable" that bureaucratic effort was used as an argument against providing better care to those in need of protection, says government commissioner Rörig. "Whether people are protected from sexual violence currently depends on chance and the commitment of individual people," he says. Last fall, the European Commission opened an infringement case against Germany to address its lack of compliance with the Brussels directives.

Conditions in refugee hostels in Germany are intolerable for many women. Shorouk Kerd, a 21-year-old law student from Homs, Syria has lived for the past seven months in a former elementary school in Bielefeld together with her husband, Mohamad Ali Hamami, a 32-year-old carpenter. For almost their entire stay there, the couple shared a room with eight other refugees, only now have the others moved out. Plastic tarps serve as walls, the bathroom is three floors down, there is no kitchen and food is delivered. Up until just a few weeks ago, Kerd didn't even have a bed and had to sleep on the floor. "I can hardly breathe here," she says.

Kerd is in her sixth month of pregnancy and is becoming worried about the baby. She already had one miscarriage shortly after her arrival in Germany. At the time, she was housed together with 300 people in a gymnasium in Bottrop.

Since she has lived in mass accommodations, she has had trouble sleeping and is battling depression and anxiety attacks. She only leaves her room in the company of her husband and says there are drunken refugees in the hallways at nighttime. Kerd says she has nobody to talk to about her problems and that only men work at the hostel. The director is a woman, but she is often unfriendly. The state has thus far not provided her with the services of a midwife for pregnancy care, saying that there are insufficient funds. In January, a doctor found that the couple badly needs their own apartment, but nothing has come of it.

Women are often victimized several times. Many of them experienced sexual violence in their home countries or during their flight to Europe -- and now they are vulnerable once again in Germany. The spectrum of abuse ranges from pick-up lines paired with threats to groping and even rape. The lack of a private sphere is also a problem for the women: They are never alone. Many women only want to take off their headscarves behind closed doors, but there are none.

Little is known in Germany about the extent of violence against refugee women and there has been little research into the issue. In one of the few studies that has been undertaken, four out of five respondents said they had been the victims of psychological violence with every second woman saying they had suffered physical violence. The study is now more than 10 years old, but experts believe it is improbable that the numbers have sunk since then.

In addition to other refugees, the perpetrators also include security personnel, care-givers and volunteer helpers, all of whom can take advantage of existing structures to easily approach their victims. Institutions such as schools, boarding schools and daycares, where there are clear hierarchies of power, are considered to be particularly prone to violence and abuse, says Ursula Enders, head of Zartbitter, a center for victims of sexual violence in Cologne. Refugee hostels are also susceptible, she says. "It infuriates me that nothing is being done."

In addition to women, minorities are also the victims of attacks. Boris Fadeyev relates how several men stormed into his room in a Berlin refugee hostel three months ago. One of them yelled: "Do you smell that? It stinks like shit here, you fag!"

Fadeyev, whose name has been changed for this article, is 33 years old and fled last year from Russia to Germany. He is gay and was persecuted back home because of it. His own father wanted to shoot him. "I came to Germany to find protection," Fadeyev says. When his roommate in the refugee hostel, a Moldavian, found out that Fadeyev was homosexual, his problems started anew. His roommate insulted him and threw dishes at him.

Fadeyev says that nobody helped him, but he also didn't lodge a complaint. "That would have only made it worse." Fadeyev no longer felt safe in the hostel. Ultimately, a social worker found a spot for him in one of the few refugee shelters in Germany for gays, lesbians, transsexuals and bisexuals. Now, Fadeyev says, he feels free for the first time.

Experts like Heike Rabe from the German Institute for Human Rights have been demanding for months -- in vain -- the introduction of minimum standards for refugee hostels such as those that exist in youth hostels. Those demands include separate and lockable showers and bathrooms for men and women. Furthermore, Rabe says, hostel personnel must be trained in dealing with instances of sexual violence and women must be provided safe havens and support from social workers in addition to being better informed about their rights in Germany. Should they become victims of violence, Rabe says they must be quickly brought to a safe place. Currently, she complains, it takes too long for the authorities to react by, for example, sending perpetrators or victims to a different refugee hostel.

"The situation in the refugee shelters is bad in many places and indications of violence and sexual attacks are unfortunately on the rise," says Ralf Kleindiek, state secretary in the German Family Ministry. In March, he sent a letter to Interior Minister de Maizière in which he proposed a compromise. German states, he suggested, should be encouraged to develop a plan for helping those refugees in particular need of protection.

'Even War Is Better'

The Interior Ministry still hasn't answered. When contacted, the ministry said it was examining the proposal but that responsibility lies with the states. According to his spokesman, de Maizière sees the need for action primarily when it comes to "the safety of asylum-seekers of the Christian faith."

The Chancellery has likewise declined to address the issue. Angela Merkel recently rebuffed a request from the heads of Germany's largest charity organizations for a nationwide law addressing the issue and said it was up to the states. In mid-April, leaders of the chancellor's governing coalition intended to address the issue during a regularly scheduled meeting, but it was deferred. During the chancellor's meeting with state governors just over two weeks ago, the issue didn't even make it onto the agenda.

The Family Ministry has resorted to launching individual initiatives. Municipalities, for example, can apply for assistance from the KfW, a German government-owned development bank, should they wish to remodel their refugee hostels to address issues of violence and sexual assault. There is up to 200 million available for such projects. Furthermore, UNICEF is to hold training sessions and distribute informational material in 100 refugee facilities. Also, child-friendly zones are to be established.

Thus far, nothing has changed in the refugee hostel where Diala Hasan lives. Hasan's older sister suffered so much from the situation in the shelter that she tried to commit suicide. A security guard was able to save her at the last minute. The three sisters are now considering whether they should return to Syria. Diala Hasan says: "Even war is better than life here in the refugee shelter."