Nanga Parbat in the western Himalayas is considered by many to be the most dangerous of the world's 14 mountains with peaks over 8,000 meters. The British dubbed it "Killer Mountain" and the Nazis referred to it as their "Mountain of Fate" in the 1930s when Germany, desperate to restore national pride after its defeat in World War I, launched five unsuccessful expeditions to conquer it, and lost some of its best mountaineers in the process.

The world's ninth-highest mountain at 8,125 meters (26,656 feet) is so treacherous because climbers have to toil their way up through a murderous labyrinth of icefalls and crevices. An Austrian, Hermann Buhl, was the first to reach the summit in 1953. Since then, at least 62 people have died on Nanga Parbat, which continues to lure mountaineers up its lethal slopes precisely because it remains so challenging. Its attractions include the 4,600-meter Rupal face, the world's tallest mountain face. In contrast to other giant Himalayan peaks, Nanga Parbat stands on its own, like an enormous monument to the power of nature and the ambition of humans to overcome it. 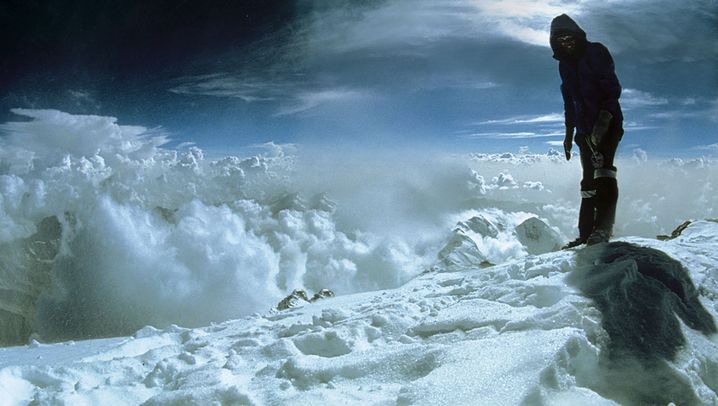 Photo Gallery: Death on The Mountain

One ill-fated expedition to climb Nanga Parbat is the subject of a new German feature film which has reopened a controversy that German media have described as the ugliest row in the history of mountaineering. It recounts how Reinhold Messner, the record-breaking climber from South Tyrol in Italy, and his younger brother Günther reached the peak via the most dangerous route -- the Rupal face -- and how Günther, 23, died during the descent in an expedition in June 1970.

In the decades that followed, Reinhold went on to become the most successful mountaineer of all time. He became the first man to climb Mount Everest without using bottled oxygen and the first to conquer all the peaks above 8,000 meters. But his career has been overshadowed by allegations from members of the expedition team that he left Günther to die on Nanga Parbat.

Deadly Descent Through Snow and Ice

Reinhold Messner has always insisted that by the time he and Günther had battled their way up to the summit on June 27, 1970, Günther was suffering badly from altitude sickness and told him that he was too weak to descend by the same difficult route. Reinhold, 26 at the time, says they both decided to traverse the mountain and descend by the less challenging Diamir face on the other side. He says he went ahead and that Günther followed behind, and was probably swept away by an avalanche. After failing to find his brother, Reinhold made the arduous descent on his own through ice and snow. He reappeared at the foot of the mountain six days later with frostbite so severe that six of his toes had to be amputated. It was the first ever traverse of Nanga Parbat.

The tragedy brought bitter personal rivalries within the team to the surface and triggered a war of words and years of legal disputes between Messner and other expedition members. Messner claimed that fellow climbers hadn't done all they could to help him and his brother. Two of the climbers on the team who did not reach the summit, Max von Kienlin and Hans Saler, claimed that Messner had abandoned his brother so that he could take the Diamir route down and thereby gain added fame for himself.

It is a charge that Messner has always vehemently denied. His version of events -- that the two attempted the descent together -- appeared to have been vindicated by the discovery in 2005 of his brother's remains at a height of 4,300 meters, on the Diamir side of the mountain.

Vilsmaier's film "Nanga Parbat," which premiered in Germany last week, presents Messner's version of events -- which isn't surprising because the world-famous climber was closely involved in the making of the film.

'That's Not the Truth About Nanga Parbat'

But several members of the 1970 team, and the son of Karl Maria Herrligkoffer, the expedition leader who died in 1991, say the film distorts the truth and misrepresents the characters involved.

"That's a fabricated story, that's not the truth about Nanga Parbat," Gerhard Baur, a climber who was on the 1970 expedition and was the last to see the Messner brothers together, told SPIEGEL ONLINE on Sunday. "The film is a movie but claims to be a documentary. What the viewers are shown doesn't correspond with the facts in key points."

"Important details are disputable. The film reflects what Reinhold Messner claims: His brother got altitude sickness, and at Günther Messner's suggestion they both descended over the other site of Nanga Parbat, the Diamir face, out of pure desperation. The film adopts this reason Messner gave for the descent via the Diamir face. And to this day I don't believe him that that was the reason."

"I had witnessed three times how Reinhold Messner talked with shining eyes about how one should attempt it, how the traversal was the next step in mountaineering. He never mentioned that in his books."

The film had also been wrong to portray Herrligkoffer, the expedition leader, as an "old tyrant," Baur said.

Herrligkoffer's son Klaus said the film was a slur on the memory of his father. "He definitely wasn't a despot and not hysterical as he's portrayed to be in the film," Klaus said. He demanded that the film production company, Senator-Film, add an introduction admitting that the characters of real people had been radically changed in the film.

'I Wasn't Able to Save my Brother'

Messner, 65 now, dismissed the criticism this week and repeated that he and his brother had had no alternative but to descend via the Diamir face, and that Günther had disappeared somewhere behind him during the descent.

"I wasn't able to save my brother. The whole world can now say that Messner left his brother behind on the last few hundred meters. I say: 'Yes, otherwise I'd be dead too,'" he told Stuttgarter Zeitung newspaper in an interview published on Tuesday. "I was completely exhausted myself."

Claims that he had abandoned Günther or sent him back down the Rupal face had been disproved by the discovery of Günther's remains in the Daimir face in 2005, he said. "It proves that these people invented a pack of lies which hundreds of journalists repeated. That's a scandal."

The controversy looks set to live on, though, until all the protagonists have died. Meanwhile, the film has been met with mixed reviews. Some critics say it fails to convey the drama of Nanga Parbat and of the fateful expedition to conquer it. The Berlin daily Der Tagesspiegel called the movie "wooden" and said Vilsmaier's reliance on pretty footage of the mountain shot from a helicopter was "far too sterile for a majestic 'mountain of fate.'"

Die Welt writes: "The film leaves you perplexed and strangely unmoved. Partly because one has the impression of just having witnessed a pure vindication campaign by Reinhold Messner. The whole thing could have been a little more balanced."