The cold drizzle didn't dampen the celebrations on Monday as Berlin marked the 20th anniversary of the fall of the Berlin Wall by ceremoniously toppling 1,000 colorful 2.5-meter-high (8-foot) dominoes. The spectacle was watched by tens of thousands as well as world leaders gathered at Berlin's Brandenburg Gate, the symbol of Germany's division and reunification.

The dominoes stretched for 1.5 kilometers (0.9 miles) along the line the Wall took through central Berlin. Lech Walesa, the former leader of the Solidarity trade union, tipped over the first one. It was a fitting tribute to Poland's struggle for freedom throughout the 1980s, which culminated in its first free election on June 4, 1989, and provided the key momentum for the East German demonstrations that helped bring down the Wall. 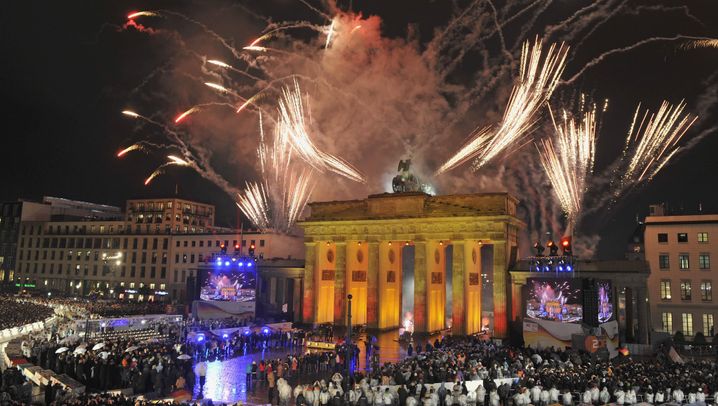 Earlier in the day, Chancellor Angela Merkel had stepped back into her own history. Accompanied by Walesa and former Soviet leader Mikhail Gorbachev, she walked across the iron bridge at Bornholmer Strasse that used to separate East from West Berlin and was the first checkpoint to open its barrier to thousands of easterners on the night of Nov. 9, 1989.

On that fateful night 20 years ago, Merkel had joined the crowd pushing over to West Berlin at around midnight. She took a look at the pubs and doner kebab shops of the western district of Wedding, but, unlike thousands of fellow East Berliners, she didn't make the pilgrimage to the shining lights of the Kurfürstendamm, West Berlin's defiantly capitalist showcase boulevard. The next morning, the trained physicist showed up for work as usual at the Institute for Physical Chemistry in East Berlin.

The last 20 years have been an incredible journey for the shy pastor's daughter who grew up in the east and became leader of a unified Germany. The end of Germany's division "was one of the happiest moments of my life," she told the crowd gathered at the colorfully illuminated Brandenburg Gate on Monday night, after walking through the gate with the leaders of the other 26 European Union member states, Russian President Dmitry Medvedev and US Secretary of State Hillary Clinton.

She hailed the courage of the East Germans and said the fall of the Wall should serve as an inspiration to master current challenges.

"The night of Nov. 9, 1989, was the fulfilment of a dream," Merkel said. "Many played a role. But it would not have been possible without the courage of the people in the former East Germany."

'Freedom Must Be Fought For'

"Freedom doesn't create itself. Freedom must be fought for," the German chancellor added. "We have the ability to overcome the barriers of our time, just as we managed it here in 1989 in this divided city. If we believe in it, we'll manage it."

She said the date also marked a darker anniversary -- the 71st of the 1938 pogrom launched by Nazi Germany against its Jewish population in which at least 2,000 Jews died.

French President Nicolas Sarkozy marked the occasion by delivering a message in German, saying "Wir sind Berlin" ("we are Berlin"). Earlier, he had put a photograph of himself on the social networking site Facebook that, he said, showed him hammering away at the Wall in November 1989.

The celebrations ended with a firework display over the Brandenburg Gate.