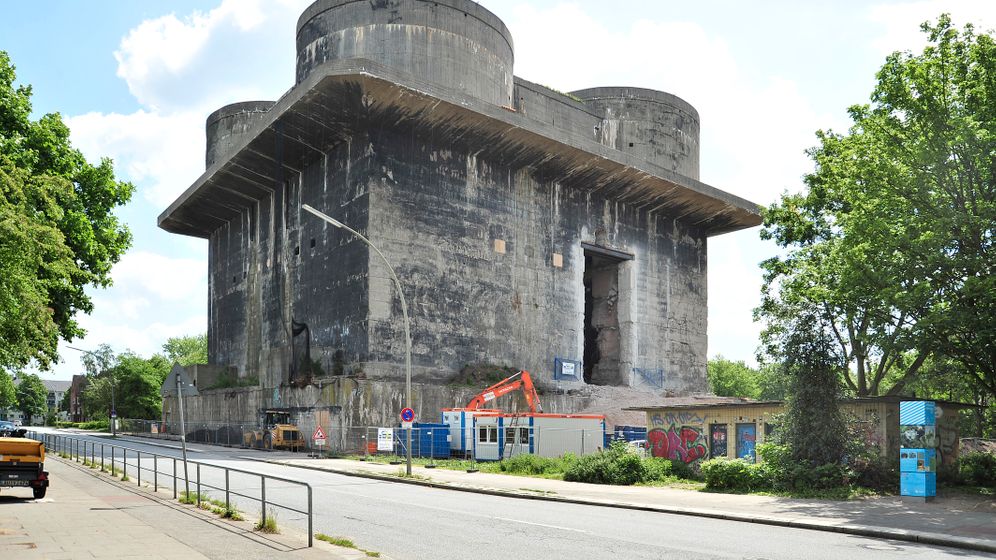 Photo Gallery: Renewables from the Bunker

At times during World War II, up to 30,000 people would cram into Hamburg's Wilhelmsburg bunker to take shelter from Allied bombs. The enormous flak tower built during Adolf Hitler's Third Reich was nothing if not sturdy. Indeed, it was so robust that it even survived post-war attempts to blast the block to the ground with dynamite.

For decades thereafter, the bulky eyesore stood derelict. But now, city planners are propelling it into the 21st century, turning it into a flagship renewable energy project.

The revamp of the appropriately renamed "energy bunker" is well underway. Yellow diggers have smashed through its two-meter thick walls, opening up one of the building's facades. Scheduled to be finished in early 2013, the hollowed-out core will ultimately contain a biomass heating plant. Solar panels will cover the roof and the south wall, and it will contain a storage tank to pump hot water to nearby houses. The bunker is to supply 3,000 households with their energy needs.

The extensive overhaul is the work of IBA Hamburg, an urban renewal project searching for environmental solutions to problems facing the world's cities. The project's urban planners and energy specialists aim to show that cities can do more than just import renewable energy produced in rural areas. They say an urban energy rethink is long overdue, not least because cities consume some 80 percent of the world's resources -- meaning that they play a make-or-break role in countering climate change.

By homing in on the Hamburg district of Wilhelmsburg, the IBA team wants to provide a small-scale showcase to demonstrate what a sustainable cityscape could look like.

"We are doing something new, bringing energy production into the center of the urban environment." Karsten Wessel, coordinator of the IBA's Cities and Climate Change project, told SPIEGEL ONLINE. "In Germany we already have settlements which are 100 percent self sufficient when it comes to energy, but they are mostly rural."

Last year, the city of Munich announced plans to be completely reliant on renewable energy by 2025. "But they plan to import energy from across Europe and from offshore wind farms," Wessel says. "We are working locally."

Wessel and his colleagues aim to make the whole district carbon neutral and to supply the entire district's electricity needs with renewable energies within 15 years. By 2050, renewables will also provide the heating requirements for the district, which is sits between the northern and southern branches of the Elbe River not far from the Hamburg city center.

Aboard a solar-panel-clad building afloat on the Elbe River, the city planners are working towards their ambitious aim. Their colorful "swimming house" contains an exhibition of their vision. Guides also take groups on bike tours to show off the work-in-progress.

From the terrace, visitors look out across the industrial landscape which dominates the area; huge cranes soar above the skyline. It is a district, home to one of Hamburg's largest immigrant populations, which has long been neglected by city planners -- apart from having major traffic arterials plowed through it.

Still, the bunker project has met with a mixed reaction from locals. Margaret Mackert who is creating a documentation center about the flak tower, said the site is significant and its history must be preserved. "For older people who were children during the war, the bunker is mostly seen in a good light, as offering protection. Younger people see it as an ugly and threatening memorial -- but they know it is important that it stays."

Atop the Energy Hill

In addition to revamping the bunker IBA planners are also developing a so-called "energy hill" in the district. It too has a connection with World War II, being little more than a heap of rubble piled up after the bombs stopped falling. In subsequent decades, it was used as a depository for household waste, followed by poisonous industrial waste and toxic pesticides.

Although the dumping stopped in the late 1970s, the noxious artificial hill later exploded, contaminating local drinking water. Since then the bulky landmass has been "sealed" with plastic -- but remains inaccessible to locals for health reasons.

By mid-2012, however, three advanced wind turbines will grace the top of the hill and a swathe of solar panels will cover its sides. Grass cuttings will be turned into biofuel. Ultimately, the hill is to provide electricity for 2,000 households.

In the light of Germany's decision to switch off its nuclear power stations for good by 2022, the extensive IBA climate project has proven timely. Its experience will be closely watched, and, if it meets its targets, it could emerge as a role model for urban energy planning.

Greenpeace Energy Expert Andree Böhling argues that it is essential that cities do more to develop renewable energy locally. "As the biggest energy consumers, cities cannot afford to sit back and wait for an energy rethink to happen elsewhere. They need to lead the charge."