On the morning of the eviction, an hour after the bailiff has changed the locks, 10 protesters are standing in a small community garden between the apartment building and the subway station. One of them says: "I'm furious and sad and disappointed that we couldn't prevent it from happening." Another one says: "It's too bad Rosemarie wasn't here." A woman named Sara Walther says: "Rosemarie didn't have the strength to come."

Rosemarie Fliess died in a homeless shelter on April 11, two days after her landlord enforced an eviction action against her.

The fate of the 67-year-old retiree, who had difficulty walking, has ratcheted up the debate over forced evictions in the German capital. For months, furious local residents have staged protests when bailiffs and police officers have thrown delinquent tenants out of their apartments. Now Rosemarie Fliess has become something of a symbolic figure, giving protesters the ammunition to shout "Eviction kills!"

Rising rents have politicized citizens, though not just in Berlin. In Hamburg, Munich and Frankfurt, residents are protesting against the consequences of the real estate boom, while the courts are dealing with thousands of eviction cases. The scarcity and high cost of housing is now an issue in Germany's federal election campaign, as well as a factor fueling conflict in the streets, such as during the May 1 demonstrations in Berlin.

The two sides in this conflict consist of an alliance of leftist activists, immigrants, retirees and families, on one side, and real estate investors and landlords, on the other.

Sara Walther, 57, is a spokeswoman for the alliance. She won't reveal her real name, saying that the collective and its cause are more important than her identity. "The majority of the population thinks that actions for eviction are shit." She and her fellow activists, who call their movement "Preventing Forced Evictions," are fighting against a system that can make people homeless virtually overnight.

They are a mobile protest group that shows up at evictions throughout the city as well as calling for sit-ins and demonstrations. Using a list of more than 400 mobile-phone numbers, the group sends text messages to drum up support from its sympathizers. The dates of the protests are announced online. Walther calls it "civil disobedience." The group's appearances are now accompanied by a large police contingent.

Steffen Haase is a spokesman for the other side, the DDIV association of German real estate managers. "Many delinquent renters largely have themselves to blame for the fact that they are being evicted," says Haase, claiming that they ignore termination notices and warnings sent to them by mail. "But no one ends up classically homeless because of an eviction," he adds. "People who are evicted are admitted to a residential facility."

That was also supposed to happen in the case of Rosemarie Fliess. The retiree was determined to keep her one-and-a-half room apartment. Though mentally ill, she refused to accept treatment from the outpatient mental health service the landlord had brought in. After Fliess had failed to contact the social welfare office, the agency terminated rent payments for her apartment. That was when the landlord obtained the eviction order. Fliess was forced to move to a homeless shelter, where she died a short time later. In a YouTube video, the operator of the shelter characterized her death as "murder by the authority of the state."

There are no records kept on how often forced evictions take place in Berlin. According to the results of an inquiry of the city-state's parliament, however, district courts reported 9,934 actions for eviction to the social welfare offices in 2010. The number of evictions that actually occurred is unknown. In Hamburg, by comparison, more than a third of 4,428 actions ended in eviction in 2012.

Such actions often result from disputes between tenants and landlords over such issues as the residents' behavior, the owner's personal needs or overdue rent. It is typical for a tenant to believe that he or she is entitled to withhold rent because of deficiencies in the apartment, explains a judge with a Berlin court of appeal. Judges dealing with landlord-tenant disputes see these issues in court on a daily basis, he adds.

Ali Gülbol is one of those routine cases. A painter by trade, he has lived in Berlin's Kreuzberg district since he was born. In his case, his rent was being raised, and he initially refused to pay the increase. Gülbol, 42, lost his case and was ordered to pay the outstanding amount of €3,700 ($4,800). Bülbol claims that his landlord subsequently terminated the lease because he was late in transferring the outstanding funds.

Another attempt to fight the eviction in court failed in August 2012. "I would have accepted having to pay a thousand more because I was late in transferring the money," Gülbol says. "But putting an entire family on the street because of that is going too far."

On Feb. 14, Gülbol, his wife, Necmiye, and their three children were thrown out of their apartment. The alliance marshaled about 1,000 protesters, and the Berlin police sent 831 officers to oversee the eviction and used 32 cameras to film the crowd. A police helicopter was overhead for more than three hours. The bailiff, disguised as a police officer, was only able to reach the apartment through a rear courtyard. "I felt like a dangerous criminal whose apartment was being raided," Gülbol says.

To protect others from suffering similar fates, Gülbol has become active in the alliance. When he met Rosemarie Fliess during a sit-in, he says, she told him that they used to lock unwanted people into ghettos. The streets are the new ghettos, she said.

At a memorial rally on the day after Fliess's death, 350 people went to her old apartment, placed flowers in front of the door and lit candles. Sara Walther spoke a few words through a megaphone. "Rosemarie died of a broken heart," she said at the end of her speech.

The conflicts have already begun to affect the housing market. Some landlords dread the attention a forced eviction can now bring. Three evictions were cancelled in the last few days. In a fourth case, an agreement is still not in sight, and the attorney has since asked the alliance for "out-of-court support." 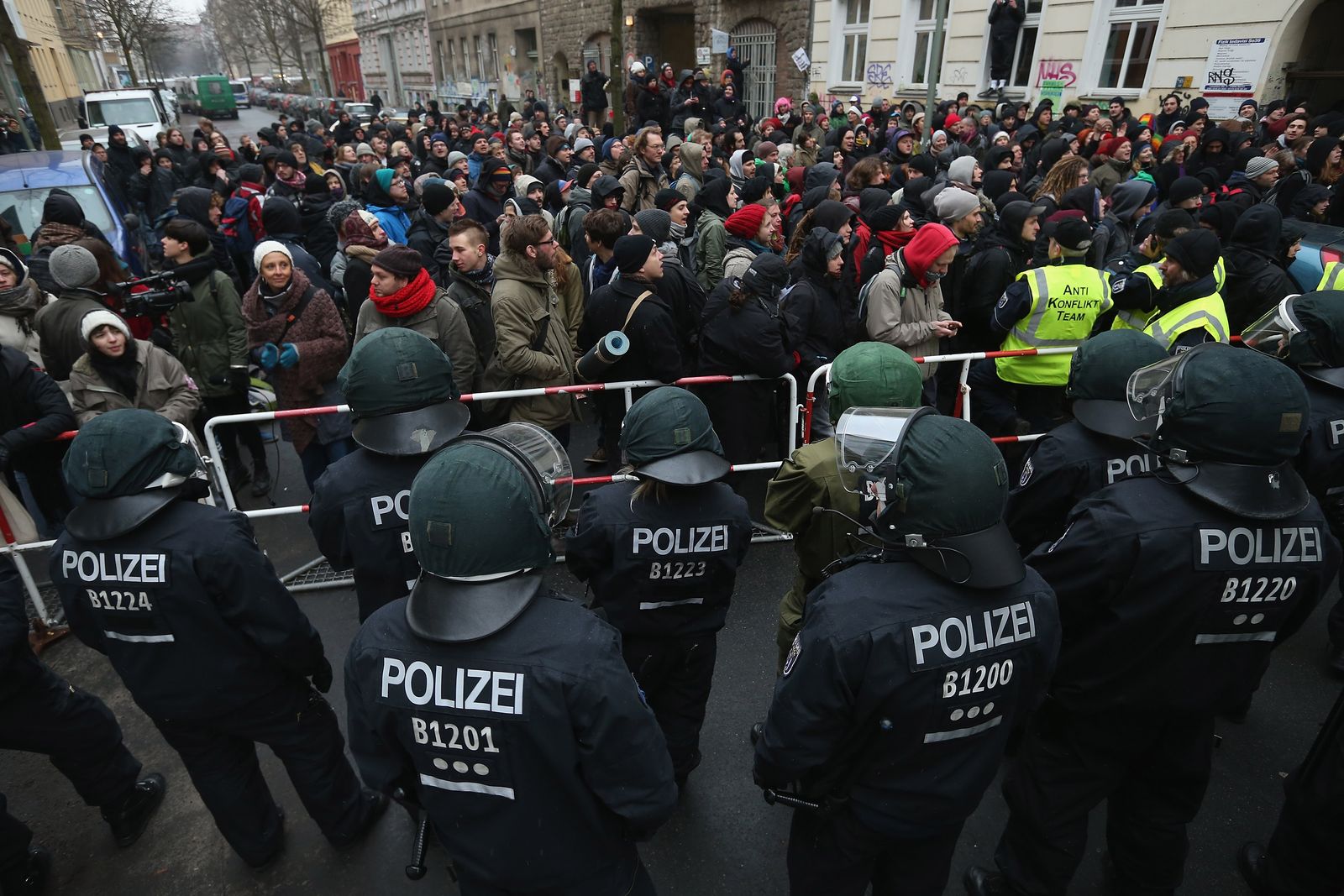 Protesters demonstrate near an apartment in Berlin from which a German-Turkish family was being evicted in February 2013.