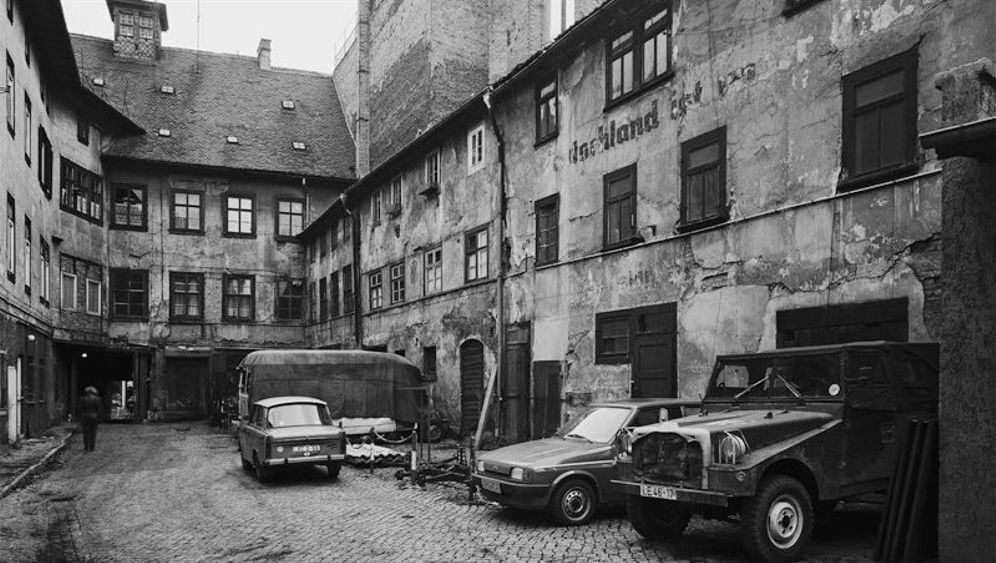 Footsteps echoed on the cobblestones in the narrow street. The photographer carried a large plate camera over his shoulder. Fascinated, his searching gaze wandered over the lavish Renaissance portal entranceways, the balconies with filigree railings and the elaborate stucco facades. The plaques above the doorways bore witness to a brisk business in the neighborhood: "Bicycles and Motorcycles, est. 1907" read the sign above one of the shops. Others read "Schindler's Floral Hall" or "Printing Society and Publishing House." But on the street itself there wasn't a soul to be seen.

The man paused, looked for a place to mount his tripod and pointed the camera at the street. Then his head disappeared under the black cloth, and soon he saw his subjects appear upside down on the ground glass focusing screen. A row of town houses dating from between the Gothic and the late 19th-century Gründerzeit periods. One small niggling detail irritated the photographer -- and brought Stefan Koppelkamm back to the present. A Trabant car was parked on the side of the road. It was June 1990 and he was in Görlitz, a small town in what was still East Germany.

For a moment, designer and photographer Koppelkamm felt as if he had travelled back in time 50 years, to pre-war Germany. "It must have looked like this," he supposed.

Had the recently deposed GDR leadership had their way, the West German photographer would not have been standing in the old quarter in Görlitz in the summer of 1990. The whole of the old quarter would have already been torn down.

For the communist regime, the goal had always been clear. The social problem of housing would be resolved by 1990. That's what Erich Honecker declared in June 1971 at the eighth party congress of the Socialist Unity Party (SED), the ruling political party, shortly after he took over the post of general secretary from his predecessor Walter Ulbricht. The new leader wanted to distinguish himself and minimize frustration among the East German population through a social policy centered around an ambitious housing program.

Government plans foresaw the modernization of old buildings which were still intact as well as the construction of monstrous high-rise settlements on the outskirts of cities. But in Görlitz, a town in the easternmost corner of the GDR, the buildings of the historic old town were almost all completely evacuated by the late 1980s -- most of them were uninhabitable. The East German government had planned to demolish the buildings and redevelop the area, but it never came to that. The GDR didn't solve its housing problem by 1990. Instead, the state itself disintegrated.

A stroke of luck for the photographer, who on a tour of Zittau, Leipzig and Dresden's Neustadt discovered a Germany that he hadn't known existed. His home town of Saarbrücken, like many other German cities, had suffered heavy damage during World War II. The "so-called reconstruction was actually the second phase of destruction," said Koppelkamm, "many West German cities were completely ruined under the premise of creating a 'car-friendly city.'" Nothing remains of their architectural history, unlike in Görlitz, Zittau and Dresden.

80 Years' Rent for a Private Bathroom

Although fascinated by his time travelling, Koppelkamm realized in the early 1990s that no one but him was interested in the sights of the unspoilt East. Looked at in the cold light of day, his photos depict buildings with gray facades, broken windows, tattered blinds and bricked-up entrances. In front, temporary scaffolding protects pedestrians and parked cars from falling bricks and bits of masonry.

The widespread decay of East German buildings in the 1980s was clearly visible. Hardly anyone wanted to live in the gray buildings with moldy entranceways, where when it rained the water would pour out of the broken drain pipes and pummel against the outside wall. No one wanted apartments without a functioning bathroom, with coal heating and damp in the walls. People preferred the large residential complexes, which despite being rather bleak and cramped, were at least solid and came equipped with "full comfort," as it was known in the GDR -- central heating and a hot water supply.

Neither housing associations nor private owners had the money to renovate the older buildings. From the end of the war onwards the government had fixed rents in the GDR and in practical terms they remained constant -- at between 0.40 and 1.20 East German Marks per square meter. On average the estimated cost of restoring an old building in East Berlin was 75,000 Marks, the equivalent of 80 years' rent for a GDR citizen. Many owners preferred to pass their dilapidated buildings onto the state to avoid the cost of the repairs. But the state wasn't in a position to save the buildings either.

'The Thrill Was Gone'

Ten years after his journey through an East Germany reminiscent of pre-war days, photographer Stefan Koppelkamm took another look at his pictures. What had become of those old facades? He returned to the Neustadt (new town) area of Dresden. It isn't difficult for him to find the same buildings again: "I noted down the addresses the first time, and for some pedantic reason I even wrote down the focal lengths I used." With the old photo in his hand, he quickly found the location.

But after the first stop he would have preferred to cancel the tour altogether. The buildings had been renovated. "In quite a normal, almost trivial style," said the designer. "The thrill of the first trip was gone."

Back at home Koppelkamm laid out his photos next to one another, old and new. Suddenly he was surprised by what he saw in front of him. Zittau was particularly striking: the photographer remembered the narrow lane he had walked down in June 1990. Suddenly he had found himself on a deserted square with a huge building sitting on it, "like a pyramid." It had been possible to trace almost 500 years of history on the bare pediment of the eight-story building, and almost none of the windows had been alike. The structure, which had served as a salt chamber, a warehouse and a stable for horses had been extended several times. In the middle of the 18th century a baroque tower had been added to give the roof a whole new profile. And now?

Ten years later the pediment had been completely plastered over -- the distinctive natural stone that had formed the corners of the foundations had also disappeared. All the windows were now the same size. It had been turned into a shopping mall.

In 1990 Koppelkamm had recorded something that was now gone forever.

In Berlin-Hellersdorf he couldn't take a second picture. The wasteland he visited in 1990 had been built upon. A new building blocked the view. Otherwise he was pleasantly surprised: apart from an old half-timbered house in Halberstadt, all his original subjects had survived into the new decade, a few of them hadn't been spoilt at all.

When Koppelkamm was once again standing on a street in Görlitz in September 2001, a man told him: "You can move into a new apartment every week here. They're all empty." His words sounded bitter. The buildings had been renovated, but just like in 1990, the photographer was once again almost completely alone on the street. Many locals had left Görlitz in search of work. This time, they left for good.