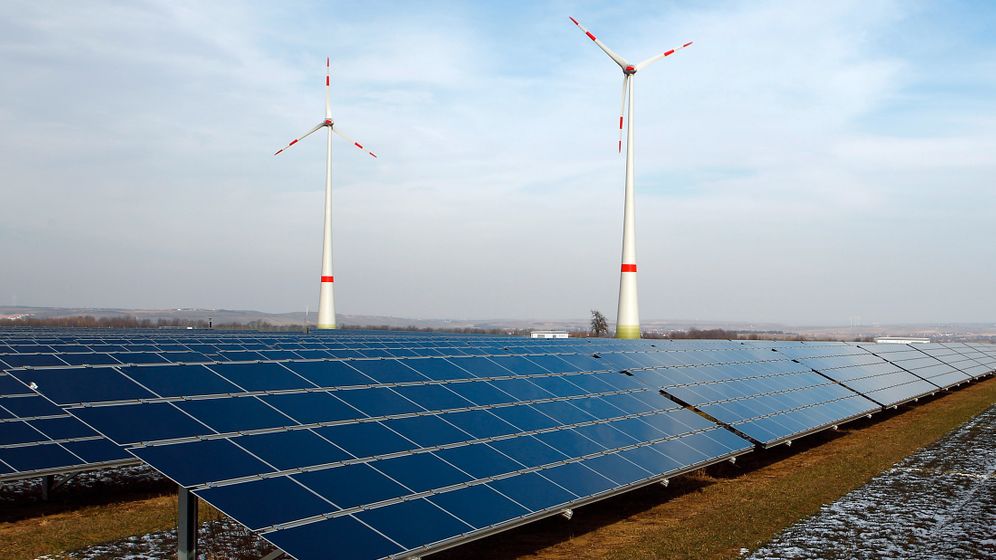 Stuart Brannigan believes that the subsidization of solar power practiced in Germany is extremely exaggerated. Brannigan, a British citizen, says that it's "absolutely necessary" that it be drastically reduced in size.

It's a surprising remark, considering that Brannigan is the European managing director of Yingli Green Energy, a Chinese solar energy company which largely has German government subsidies to thank for the fact that it has been able to grow from a small business into a major player in just six years. Brannigan hasn't exactly made any friends in the photovoltaic sector, especially not in Germany, with comments like this.

Yingli opened up shop in 2004 as a small photovoltaic business, producing solar cells, in Baoding south of Beijing. At the time, the company was manufacturing 6 megawatts worth of solar panels a year -- enough for the roofs of houses in a few villages.

The company now boasts annual sales of more than $1 billion (€740 million). Yingli is a sponsor of the upcoming football World Cup in South Africa. It is referred to in the media as a "solar giant." And Germany is the reason why it is a giant.

Almost half of Yingli's production is shipped to Germany, which is an attractive market for solar producers, largely because of the Renewable Energy Sources Act (EEG) enacted in 2000. The law guaranteed a price of up to €0.57 ($0.76) per kilowatt-hour for electricity derived from solar power that was fed into the grid. The so-called feed-in tariff has since been reduced to a maximum of €0.39, which is still six times the normal producer price. But Brannigan can live with the new reductions. The cuts may actually benefit Yingli in particular, because other producers can't compete with China's low wage costs.

Nevertheless, says Brannigan, "Germans can be proud of this law." Without the help of lawmakers, he says, Germany would hardly have seen such dynamic development of renewable energy sources. What was once a niche industry has turned into a sector with global importance. The solar industry is responsible for almost 80,000 jobs in Germany alone.

But lawmakers have overshot the mark by far, at least when it comes to subsidies for solar energy. Anyone who installs solar panels benefits from guaranteed feed-in tariffs for the next 20 years. That means that, over a 20-year period, Germany's electricity customers will pay a total of around €14 billion in subsidies -- just for the solar panels that were installed in 2009. And that cost is likely to rise in the future, because Germans are mounting more and more solar collectors on their roofs. Economists estimate that all the solar panels installed by 2013 will cost German consumers more than €70 billion. Thanks to the generous subsidy program, crops on some fields have been replaced with arrays of shimmering, bluish modules mounted on automated stands and tilted toward the sun. And all of this is being done for an amount of electricity that meets only 1.1 percent of German demand.

The German government has also recognized that the system cannot continue in its current form. In addition to an annual reduction of about 10 percent in feed-in tariffs, in place since 2009, the subsidy program will be drastically reduced by another 16 percent on July 1.

The industry is horrified. Solar manufacturers have taken out full-page ads in newspapers, addressed directly to "Dear Chancellor Merkel," begging her not to touch the EEG.

Frank Asbeck, CEO of the German photovoltaic giant Solarworld and an unofficial solar industry spokesman, fears a solar eclipse and sees a "wave of bankruptcies" headed for the industry. In the wake of the 2009 crisis, he says, the solar sector is still on shaky ground, with most companies remaining in the red -- except, of course, Solarworld.

In fact, Asbeck has created the only fully integrated solar company in Germany. Solarworld handles everything from silicon processing to manufacturing modules to recycling old products. In Freiberg, a town in the eastern German state of Saxony where Solarworld has its production plant, Asbeck is known as the "Sun King."

He has developed a highly automated production system in this former silver mining center, where 1,200 employees produce as much as 6,000 workers do at Yingli. Asbeck estimates that the Germans have about an 18-month technological head start over the Chinese. But whether that advantage still exists is debatable. "We too use European equipment," says Brannigan, noting that he spent about $350 million on such equipment in 2009.

The EEG was long a blessing for the industry, particularly German solar producers. The guarantee of sales created a market and spurred on the industry to introduce series production. But the modules did not become significantly less expensive, at least not until the Chinese and the Taiwanese put the Germans under pressure by flooding the market with cheaper products.

As a result, the German producers' share of the market for solar cells and modules is steadily declining. In 2007, one in five solar cells installed anywhere in the world came from Germany. Today it's only 15 percent, and Germany's market share continues to decline.

Even with the compensation for electricity fed into the grid continuing to shrink, falling material costs have kept the production of solar panels extremely attractive to this day. Some systems promised returns of up to 30 percent. The industry grew accordingly, and so did the costs for ordinary electricity consumers.

According to figures compiled by the German Environment Ministry, consumers subsidize every job in the solar industry to the tune of about €150,000 a year. However, the solar publishing group Photon last year estimated the subsidy to be €218,000.

Unlike subsidized coal, however, solar energy has a good image. It is seen as environmentally friendly and future-oriented. For this reason, politicians have consistently shied away from making sharp cutbacks. Even now, the government is still sidestepping the issue. Only a few weeks ago, it postponed the 16-percent cut, which had originally been planned for April, until the summer.

It's true that renewable energy provides us with clean electricity, and with rising commodities prices and increasingly scarce resources, it could even become cheaper than conventionally generated electricity in the foreseeable future. But we haven't reached that point yet.

On the contrary, the current system of high subsidies leads to social inequality, because anyone who doesn't own a house that can be equipped with glittering solar panels is paying for the environmental investments of affluent dentists or attorneys.

"In 2010, a large household with an annual electricity consumption of 7,000 kilowatt hours will pay at least €100 in solar power subsidies alone," says Holger Krawinkel of the Federation of German Consumer Organizations.

These subsidies are also problematic for another reason. Ultimately, citizens in Germany's cloudier northern states and poorer eastern states are paying for the solar systems being installed in the prosperous and sunnier southern states.

Last year, about 40 percent of all German solar arrays were installed in Bavaria. Of the roughly €14 billion in subsidies that the EEG guarantees owners of systems installed in 2009, about €5.5 billion will go to Bavaria.

Not surprisingly, Bavarian Governor Horst Seehofer is sharply opposed to reductions in solar subsidies, despite having criticized the subsidies as being far too high only a few months ago. In particular, Seehofer is trying to prevent the planned elimination of the subsidy for solar arrays installed in open fields, a lucrative business for more and more Bavarian farmers. Meanwhile, the environmental experts within the center-right Christian Democrats (CDU/CSU) and pro-business Free Democratic Party (FDP) -- the parties that make up Germany's coalition government -- are deeply divided over the issue, on both the federal and state level.

There are many indications that the case will end up before the mediation committee of the two houses of the German parliament, the Bundestag and the Bundesrat, which represents the states. If only one of the eastern German states, where much of the solar industry is located, refuses to play along, the CDU/CSU and the FDP will lose their majority. Saxony-Anhalt has already threatened to use its veto.

The messy situation and the excessively high subsidies have a lot to do with a simple trick the industry has been playing on politicians for years: It simply made itself appear to be smaller than it really was.

The EEG law calls for the feed-in tariffs to be reviewed and adjusted at regular intervals. In the past, members of the Bundestag have consistently used industry projections of newly installed solar output per year as the basis for these calculations. And it was precisely these projections that were always relatively low (see graphic). So low, in fact, that what would have been an appropriate reduction in the rates didn't seem necessary.

In 2007, the Environment Ministry, using existing forecasts for 2009, assumed that electricity from solar energy had to be subsidized to the tune of about €2 billion, because the industry associations had projected the installation of new modules that would provide about 600 megawatts of power. The real number was 3,800 megawatts, with costs of about €14 billion over the next 20 years.

Even energy expert Hermann Scheer, a member of the German parliament for the center-left Social Democrats who is one of Germany's most prominent solar proponents, now says that the subsidies "cannot continue in their current form." But he also warns against taking overly abrupt steps. Scheer is now proposing a gradual reduction with smaller cuts, which he argues can also bring about the 30-percent reductions in cost over the next two years that many experts are calling for. According to Scheer, the industry didn't do itself any favors with its efforts to shrink the numbers. "I have always warned against underestimating the real new installation figures."

Back to Its Old Tricks

But now the industry is already back to its old tricks. The industry, especially Solarworld CEO Frank Asbeck, is putting up fierce resistance -- apparently with success. Under a plan proposed by Environment Minister Norbert Röttgen (CDU), those who consume the electricity produced by their own systems will be able to largely minimize the reduction in feed-in tariffs. Sources at competing solar companies call this move "pure Asbeck." Asbeck, for his part, concedes that the industry association, BSW, introduced a similar proposal into the discussion with the environment minister.

At first, there was a joint plan to promote the subsidy for solar arrays installed in open fields, but Asbeck isn't as interested. US competitor First Solar's thin-film photovoltaic modules are often less expensive for use in open fields. For that reason, Asbeck is focusing on rooftop installations, and Solarworld is already selling an assembly kit for personal use. It consists of a battery and a solar module, so that customers can consume up to 100 percent of the electricity generated.

Asbeck's friend Scheer believes that the new provision for personal use is unnecessary. He says that it allows new loopholes to develop that can no longer be monitored. He also points out that this sort of thing isn't even necessary. According to Scheer, solar technology is an excellent technology. It doesn't trouble him that its share of electricity generation is so tiny, despite the massive subsidies. He believes that solar energy's time will come. In 10, 20 or 30 years, says Scheer, this technology could be responsible for significant portions of the power supply.

Asbeck has the same goal in mind. He has just spoken with Larry Hagman, who once played the villain J.R. Ewing on the television series "Dallas" and is now being recruited to appear in a commercial for Solarworld. "He's a real environmentalist," says Asbeck. In the proposed advertisement, Hagman is sitting in a rocking chair, as J.R. Ewing. When his brother and family rival Bobby appears in the frame, J.R. says: "It was a great idea that we got out of that dirty oil business just in time." "And then he laughs in that cackling way," says Asbeck. 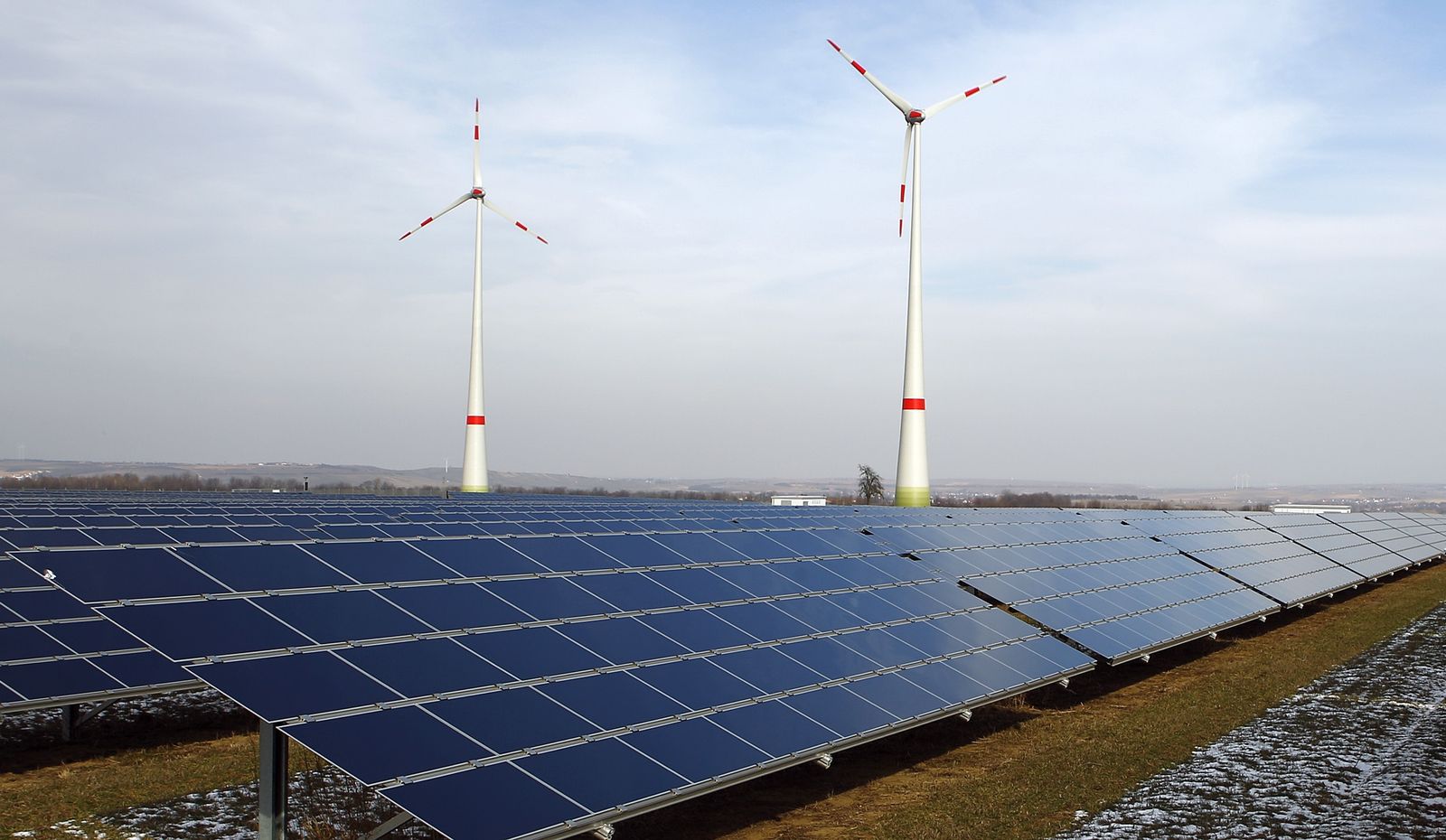 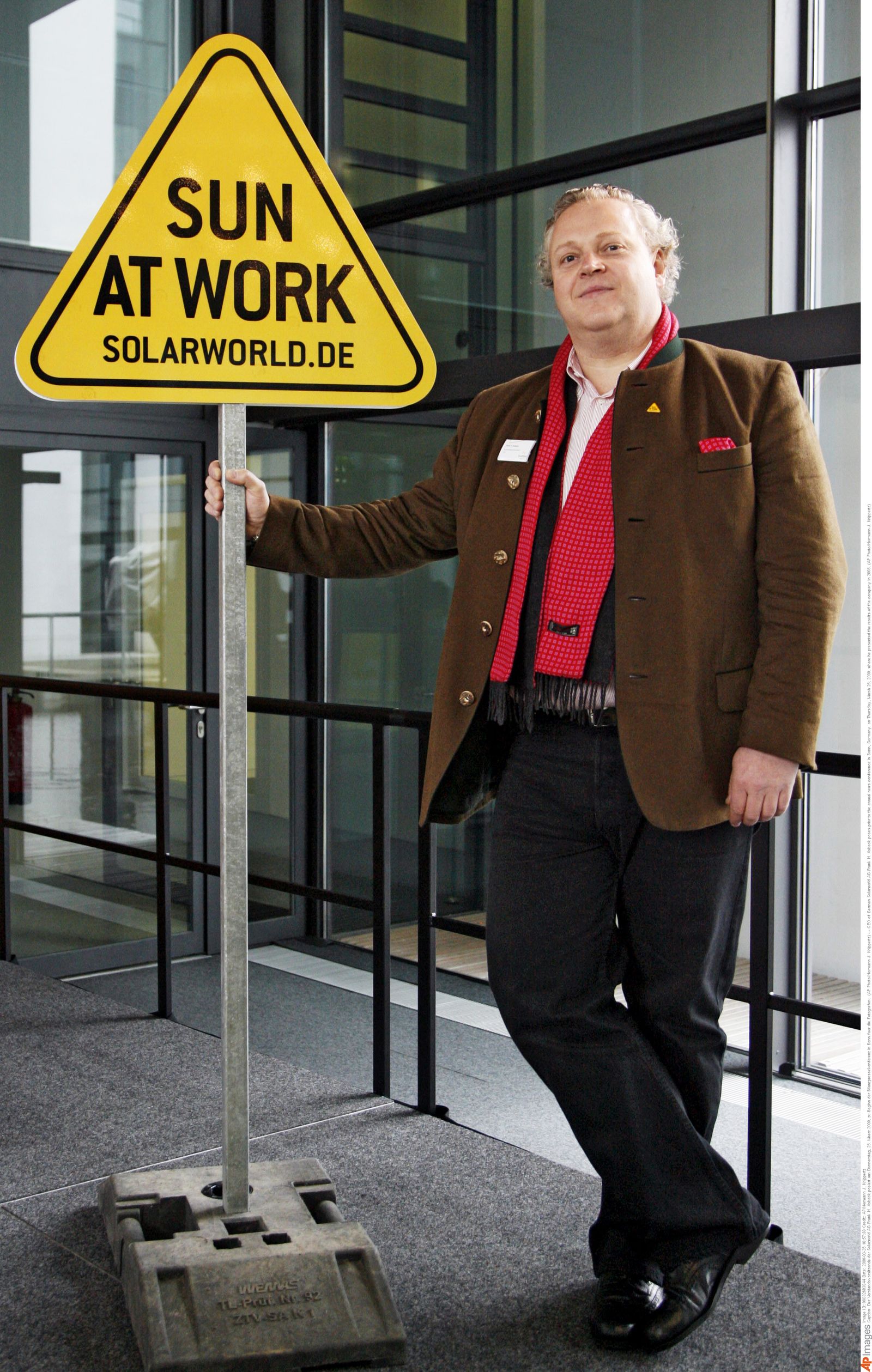 Frank Asbeck, CEO of the German photovoltaic giant Solarworld and an unofficial solar industry spokesman, fears a solar eclipse and sees a "wave of bankruptcies" headed for the industry.