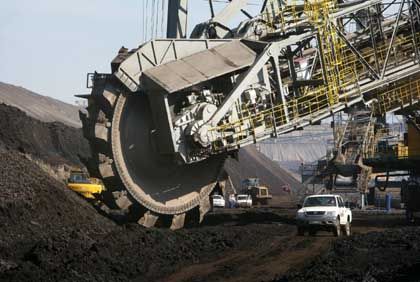 For Heiner Krieg, the future lies in the past. And that past lies buried as deep as 250 meters (820 feet) below the surface. The manager believes he's discovered a "project for the future" -- and one of gigantic dimensions -- down where a swamp formed millions of years ago.

The director of the Central German Brown Coal Mining Company (Mibrag) wants to open up a new mining district in the heart of Germany's Saxony-Anhalt region. Mibrag's experts believe a 1.2-billion-ton deposit of brown coal, also known as lignite, lies spread across an area of 7,600 hectares (29,344 square miles) near the town of Stassfurt. It would be one of the largest contiguous coal deposits in Germany and would yield a substantial turnover for Mibrag until the second half of the century -- but it would also turn large parts of Saxony-Anhalt into a lunar landscape in the process.

After years of insecurity, Germany's coal companies are in the ascendent once more -- especially in former East Germany. Mibrag, for example, isn't just carrying out geological surveys in the area near Stassfurt. It's also searching for "brown gold" in Lützen, another town in Saxony-Anhalt. Coal has also been discovered in Lübtheen in the state of Mecklenburg-Western Pomerania.

The German subsidiary of Swedish energy provider Vattenfall is also planning to dig away part of the landscape in former East Germany. It wants to significantly expand existing open pit mines in Welzow and Nochten in the Lausitz region, in addition to digging away parts of the Schleife and Trebendorf communities. And that might just be the beginning of a journey back to the energy sector's past. Enormous reserves of brown coal lie waiting in the states of Brandenburg, Saxony and Saxony-Anhalt, with a predicted 10.9 billion tons in Saxony-Anhalt alone.

Ever since the prices for oil and natural gas skyrocketed and nuclear energy became politically unpopular, there have been fewer inhibitions about extracting brown coal and using it to fuel power plants. The brown coal industry, whose product is considered environmentally unfriendly, is looking forward to a resurgence -- all the more so as modern filters make today's power plants less harmful to the environment. The German Lignite Industry Association has gleefully pointed out that Germany may not be able to exit the era of fossil fuels "in one great leap" after all.

That prediction sounds more like a threat to many people in former East Germany. Citizens' initiatives are being organized against the plans in many places -- people here are only too familiar with the effects of brown coal mining. As many as 312 million tons of brown coal were extracted under the former East German state every year -- more than twice as much as is mined in today's unified Germany. The excavators used at the mining facilities have devastated an area equal to 182,000 soccer fields, wiping at least 244 villages and neighborhoods off the map.

German brown coal deposits are located mainly in the east of the country.

But the coal company managers are trying to convince residents that everything will be different this time. Coal mining will bring jobs, create investment and boost small- and medium-sized businesses, they claim. Besides, it will take a while for the industry to get in gear, they say, with hardly anything happening before 2035. "We're not doing this for ourselves but for our children," Krieg insists. He likes to talk about the idyllic location of his house -- on the edge of an open cast mine.

And in the long run, the citizens' initiatives won't stand much of a chance against the company. Mibrag has been owned by US investors -- Washington Group International and NRG Energy -- since 1994. There's no shortage of money, and the firm is used to dealing with public resistance: The company has been trying to access the coal beneath the town of Heuersdorf in Saxony since 1994. The citizens protested, but then the so-called "Heuersdorf Law" was passed by Saxony's state parliament, stating that the village -- which is 709 years old -- has to be vacated by 2008. The dead buried in the cemetery will be moved to new graves and the church will be rebuilt elsewhere.

On the other hand, the company is still fighting to have its way in the southwest of Mecklenburg-Western Pomerania, near the Baltic Sea coast. There, experts believe they have found 1.2 billion tons of brown coal. When local government officials stopped the first geological surveys, Mibrag took the case to court. A company whose directors think in decades should be able to weather a lengthy trial.

But things will have to happen faster in Egeln in Saxony-Anhalt, where 80 geological surveys are planned for this year. Mibrag is cooperating with energy giant EnBW on planning the construction of a coal-fired power plant that will use up the reserves at the existing open cast mines by 2040. The coal at Egeln could guarantee the long-term survival of the company, which has 2,100 employees.

But not even that is enough to convince some people in the region, which is suffering from severe unemployment. To them, coal is a thing of the past.

Less than 60 kilometers (37 miles) away, the town of Thalheim is looking to the future. The town, where solar panels are produced on assembly lines, is something of a "Solar Valley" in the former East Germany. Five thousand people are expected to find work in the solar panel business by 2010. Here, at least, the future lies above ground.