There has never been much love lost between left-wing and far-right groups in Berlin, but in recent years the level of escalation has seldom been as high as it is now. A spate of politically motivated violence in Berlin has officials talking about revenge attacks, and the police in Germany's capital are on the alert. The city's mainstream political parties have also issued a joint statement against right-wing extremists.

Last weekend, five different arson attacks were reported against left-wing organizations in Berlin. The wave of arson was apparently motivated by revenge, following several attacks within the past week on far-right politicians on the streets of Berlin, with weapons ranging from water balloons to glass bottles.

The latest incident happened around 6 p.m. on Monday evening, when the 22-year-old wife of a local neo-Nazi was stabbed by three men as she walked home with her three children. A passing car scared off the attackers, who remain to be identified. The mass circulation newspaper Bild reported Wednesday that the woman had been threatened by left-wing supporters in the past month and that her husband's car was set on fire.

According to reports in two Berlin daily newspapers, on Saturday a right-wing group calling itself National Widerstand Berlin (National Resistance Berlin) sent a specific email out to supporters calling on them to carry out attacks on left-wing projects in Berlin.

The group's website includes a list of several locations in the Berlin district of Neukölln that it deems "leftist," including the Anton Schmaus Haus youth center, which was set on fire Sunday night. The Anton Schmaus Haus, which is run by Socialist Youth of Germany - The Falcons, a left-wing youth organization, offers programs such as homework help and guitar lessons, according to its website. Its façade and roof were destroyed in the fire. Employees told local papers it was lucky that no one had been hurt, given that the center often hosts overnight stays by groups of young children.

The National Widerstand Berlin website shows a picture of the Anton Schmaus Haus and describes it as place where "even young children are being ideologically influenced and molded into life-long leftists."

In the traditionally left-wing district of Kreuzberg, two cars were also set on fire over the weekend in front of the Tommy-Weisbecker-Haus, a leftist housing cooperative for youth and young adults.

Left-wing demonstrators and counter-demonstrators held a largely peaceful protest against the right-wing attacks on Tuesday in the Kreuzberg district. Still, local officials have said they fear an escalation in the violence.

Berlin's state-level interior minister, Ehrhard Körting of the center-left Social Democrats, told the Berlin daily Der Tagesspiegel in an interview that he fears that "for every action, a counter-action will follow."

Claudia Schmid, the director of Berlin's Office for the Protection of the Constitution, the state-level office of Germany's domestic intelligence agency, said on RBB-Inforadio, a local Berlin radio station, that she saw a "new quality" in the attacks, and feared revenge attacks by political opponents. "I hope that we are not seeing a new escalation between right and left," she told the station.

The violence comes just months before the Sept. 18 election in Berlin, in which district councils and members of the Berlin state parliament will be elected. Representatives from the five parties currently sitting in the Berlin parliament -- the center-left Social Democrats, the center-right Christian Democrats, the Greens, the left-wing Left Party and the business-friendly Free Democrats -- issued a "Berlin Consensus" Tuesday, in which they united against their far-right and right-wing populist counterparts.

They undertook a similar measure before the 2006 local elections, in which the far-right National Democratic Party of Germany (NPD) succeeded in winning seats in four district governments. Unlike in state and national parliamentary elections, where they must obtain at least 5 percent of the vote to be represented, parties only have to break a 3 percent hurdle to gain seats on the district level.

One of the goals of the Berlin Consensus is to prevent right-wing parties from using government buildings and town halls for their meetings, something which has been recently allowed by local judges.

Meanwhile Berlin's Left Party has taken pains to distance itself from the left-wing violence. The floor leader of the Left Party in Berlin's state parliament, Udo Wolf, told the German news agency DAPD that anti-fascist activists do not have the right to resort to violence, regardless of what party they belong to. "It is exactly that peacefulness that separates us from those we are fighting against," he said. 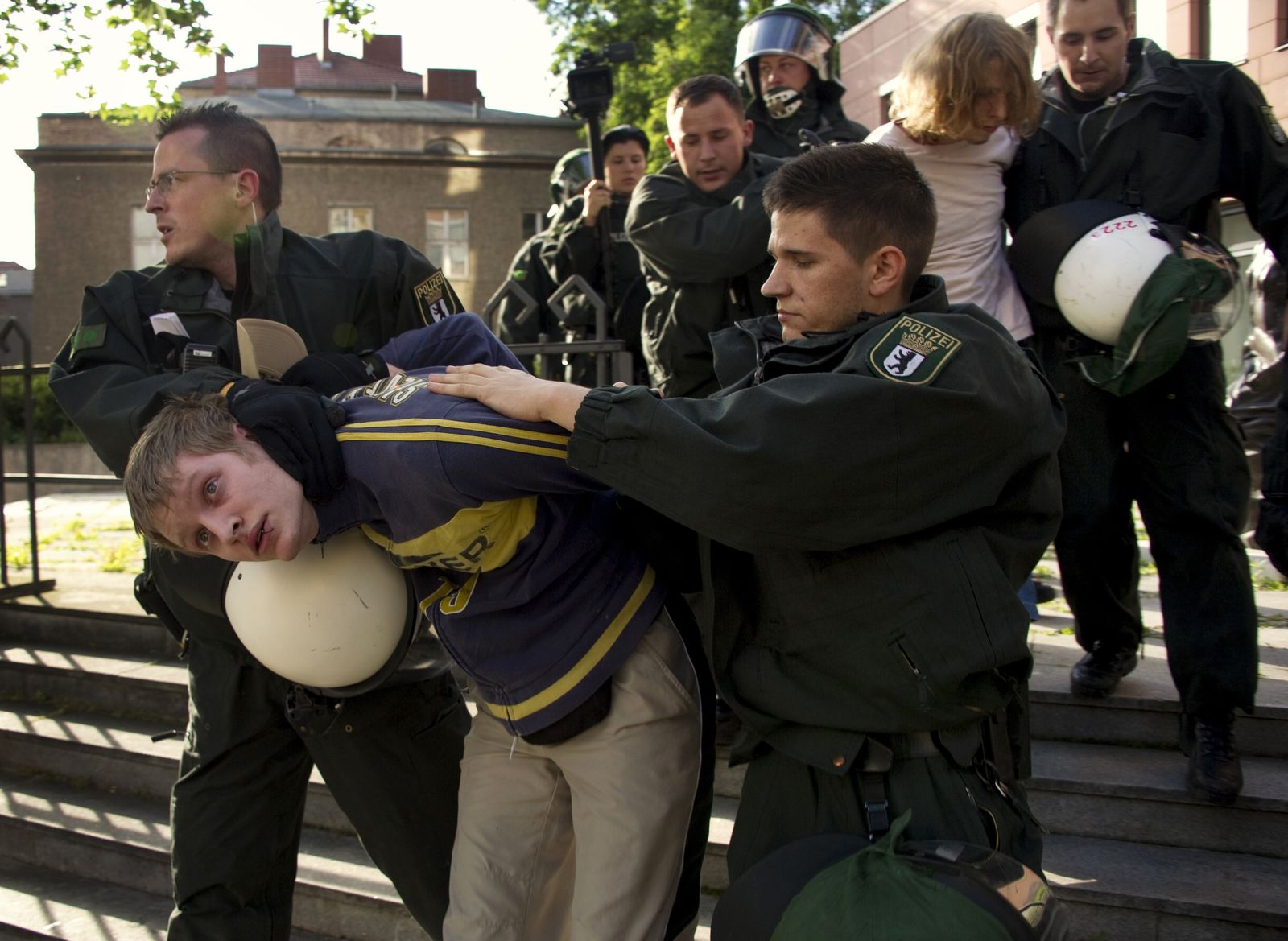 Police detain two anti-fascist demonstrators during a demonstration by the far-right NPD party in Berlin on June 17.