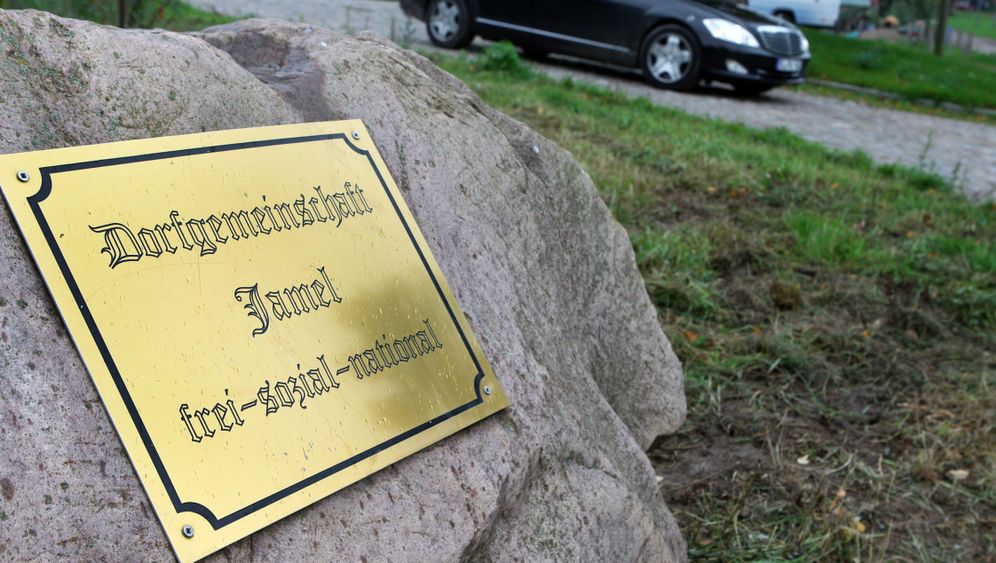 Horst and Birgit Lohmeyer have been working on their life's dream for six years, renovating a house in the woods near Jamel, a tiny village near Wismar in the far northeastern German state of Mecklenburg-Western Pomerania. Birgit Lohmeyer writes crime novels, her husband is a musician, and both try to pretend everything is normal here in Jamel.

It wasn't easy to find their new home. The Lohmeyers spent months driving out to the countryside every weekend, heading east from where they lived in Hamburg, but most of the houses they saw were too expensive. Then they came across the inexpensive red brick farmhouse in Jamel. Slightly run-down, but not far from the Baltic Sea, the house sits surrounded by lime and maple trees, near a lake.

The Lohmeyers knew that a notorious neo-Nazi lived nearby -- Sven Krüger, a demolition contractor and high-level member of the far-right National Democratic Party (NPD). What the Lohmeyers didn't know was that other neighbors felt terrorized by Krüger. He and his associates were in the process of buying up the entire village.

Jamel is an example of the far-right problem that has plagued Mecklenburg-Western Pomerania for years. The rural region, once part of communist East Germany, has a poor reputation in this regard -- the NPD, which glorifies the Third Reich, has been in the state parliament since 2006 and neo-Nazi crimes are part of daily life. In recent months, a series of attacks against politicians from all the democratic parties has shaken the state. Sometimes hardly a week goes by without an attack on another electoral district office, with paint bombs, right-wing graffiti and broken windows.

Norbert Nieszery, leader of the center-left Social Democratic Party (SPD) in the state parliament, calls it an "early form of terror." Nieszery's own office windows have been smashed twice. State Interior Minister Lorenz Caffier of the center-right Christian Democratic Union (CDU) says he has registered a "new level" of right-wing extremist violence. He believes the NPD is trying to raise its profile through aggressive behavior ahead of the state parliament election in September. One local mayor requested police protection after receiving repeated right-wing threats. The Federal Office for the Protection of the Constitution, Germany's domestic intelligence agency, has warned that the NPD is becoming increasingly influential in local municipalities and that the neo-Nazis are trying to entrench themselves in daily life.

Nowhere have they succeeded as well as in Jamel. If the right-wing extremists left, the village would be empty. Jamel is no longer just a problem at the regional or federal state level -- even Berlin is growing concerned about the situation.

SPD member Wolfgang Thierse, vice president of Germany's federal parliament, the Bundestag, visited the village a few months ago. He spent half an hour in the Lohmeyers' living room and promised to support them in their fight against the neo-Nazis. So far, nothing has changed. Jamel has come to symbolize the fact that there are places in Germany where right-wing extremists can do virtually whatever they want.

When the Lohmeyers moved here in 2004, they started to fix up their country house and to make contact with the neighbors -- although not with the neo-Nazi Krüger. They were sure right-wing extremists wouldn't be the only people in Jamel.

Only gradually did they realize just where they had ended up. Plaster crumbled from many of the houses in the village and one roof had collapsed completely. Beer bottles, car tires and gas canisters were littered behind the bus stop. There were metal fences surrounding some properties and attack dogs strained against their chains in the front yards. No one bothered to remove the swastika scribbled on the sign at the entrance to the village.

There were young men with shaved heads and army trousers in the village and Nazi rock music could be heard from across the fields on the weekends. Shots sounded from the woods, where the neo-Nazis practiced their shooting -- police later found bullet casings in trenches there. When the Lohmeyers walked through the village, children raised their hands in the Nazi salute.

Krüger has shaped the village. He grew up here, with a father who was known as a right-wing radical and who used to make his son salute each morning in the snow. Young Krüger was an outsider at school, an acquaintance remembers, and didn't find friends until he joined the skinhead scene. As a young man, he incited right-wing thugs to attack a campsite and spent time in pre-trial detention on suspicion of burglary. Still, for a long time, the Krügers were the only neo-Nazis in the village.

"Now," says Horst Lohmeyer, "they see Jamel as a 'nationally liberated zone'" -- a neo-Nazi term for places foreigners and those of foreign descent must fear to tread. The extremists took over the village in just a few years. They now own seven of the 10 houses and have driven out anyone who couldn't come to terms with them. They battered down doors and broke windows, slashed tires, flew the German imperial war flag and celebrated Hitler's birthday. In the 1990s, they stuck dead chickens on one family's garden fence with the warning, "We'll smoke you out."

The village emptied and Krüger encouraged his right-wing friends to buy the available houses. Few others dared to venture into Jamel anymore. Neo-Nazis greeted one couple that wanted to move there with "Piss off" -- and the couple's house burned down shortly before they planned to move in. One new property owner dared to set foot in the village only accompanied by police.

The Lohmeyers have made it their life's work not to let themselves be driven out of Jamel. Each year, they host a rock festival on a field behind their house. Governor Erwin Sellering of the SPD has been patron of the festival since 2009. Police fence in the area and guard the entrance, and in past years, things remained largely calm.

Help is Far Away

This summer, though, neo-Nazis jumped over the fence, yelling slurs and attacking concertgoers. Police stepped in and stopped the troublemakers. But police can't always protect the Lohmeyers -- the nearest station is 12 kilometers away.

Horst Lohmeyer sits in his kitchen, bent over a map, and runs his finger along the roads and through the towns -- Gressow, Neu Degtow, Grevesmühlen. It takes a quarter of an hour to reach the nearest police station. When Krüger got married this summer, the village was inundated with several hundred right-wing extremists from Germany, the Netherlands and Switzerland, including a number of high-ranking NPD politicians such as Stefan Köster, NPD party head for Mecklenburg-Western Pomerania.

Jamel has become a right-wing pilgrimage site -- they come from all over Europe to see the village where neo-Nazis call the shots. They celebrated Krüger's wedding until late in the night, with nationalist rock music and fireworks. The Lohmeyers lay awake in bed, frozen with fear.

Mayor Uwe Wandel is helpless in the face of the right-wing movement in his community. He sounds bitter when he talks about Jamel. "The police, the authorities, no one dares to intervene," he says. "The Nazis are laughing in our faces." Wandel says he has repeatedly asked the state government for help. The interior minister and a parliamentary delegation came by one time, he adds. "They stayed for 20 minutes, expressed concern -- then they left again."

Jamel has become a lawless place, Wandel complains, and the authorities don't take decisive enough action against the right-wing extremists. He says Krüger is allowed to dump demolition waste and burn trash in the village with impunity. The head of the department of public order in nearby Grevesmühlen says higher-level officials at the district level need to tackle the problem. They in turn say the local authority is responsible for Jamel.

Krüger, meanwhile, has much bigger plans. He has been a member of the district council for the NPD since 2009 and has bought parts of a concrete factory in Grevesmühlen, which he uses for his NPD office and his demolition company. The company logo shows the outline of a Star of David being smashed; the slogan is, "We do the dirty work." Barbed wire encloses the factory premises and dogs bark. A sign above the entrance reads, "Better dead than a slave." Krüger prefers not to comment on the accusations against him. All he says is, "Nothing that's written about me is true. I don't stand a chance against the system."

Krüger has hired new employees in the last few months. He gets contracts from fellow members of the far-right scene, but also from local businesses. Mayor Wandel says he's appalled by how far these right-wing structures now extend. "I'm afraid of a second, third, fourth Jamel," he says.

Neo-Nazis placed a boulder at the entrance to the village. A plaque attached to the rock reads, "Village of Jamel - free, social, national." Signs next to it point the way to Hitler's birthplace ("Braunau am Inn 855 km") and to the formerly German cities of Breslau (now Wroclaw in Poland) and Königsberg (now Kaliningrad, Russia). No one has removed the rock. "We've given up on Jamel," Wandel says.

Only the Lohmeyers are left.