You don't have to like the Alternative for Germany (AfD), the country's rising anti-immigrant, right-wing populist party. You can repudiate their positions and fight against them. You can even call into question the veracity of the party's name: Thus far, the AfD hasn't offered up much of an alternative at all, at least not one that goes beyond churlish negation. The party is against Merkel, against refugees, against the media, against the euro and against Islam. What does it stand for, you almost have to ask?

But the trio of state elections on Sunday showed very clearly that, for a great many voters, AfD was in fact the only electable alternative to the rest of the parties on the ballots. With mainstream parties big and small having thrown their support behind Chancellor Angela Merkel's approach to the refugee crisis, the AfD was the only outlet left for those voters frustrated and angered by her policies.

The result was something of a political earthquake in Germany. AfD didn't even exist as a political party the last time voters in Baden-Württemberg, Rhineland-Palatinate and Saxony-Anhalt went to the polls. But it came away with 15.1 percent, 12.6 percent and an astounding 24.2 percent of the vote respectively in the three elections. Many are reading it as a repudiation of Merkel's refugee crisis leadership.

But was it? In every interview, Merkel, the leader of the center-right Christian Democrats (CDU), emphasizes that she thinks deeply about the refugee crisis every day. She thinks and thinks, considering pros and cons. In the end, she would have Germans believe, she doesn't just arrive at the most logical solution. No, she arrives at the only possible logical solution. Because if she spends all day thinking about the problem, and does so over the course of several weeks and months, then there cannot be a better solution than the one arrived at by the constantly thinking chancellor.

For all those who trust Merkel, that is a comfortable state of affairs. She can do it. Moreover, with the chancellor thinking so much, voters don't have to do so themselves. And it could be that she's right -- that the conclusion the chancellor arrives at is the most balanced, logical and practicable solution. The only solution. Incontestable.

The problem, though, is that debate is the lifeblood of democracies. And when, in a state election, all the parties on the ballot except for one have more or less the exact same position as the chancellor on the most important social-political issue facing the country, then many voters who are opposed to the government line will cast their votes for that one party.

There is another factor at play here too: the unmooring of conservatives in Germany. Just because the CDU has shifted left into the center of society doesn't mean that people who are suspicious of immigration, homosexuality and the entirety of the post-modern era have disappeared. Only the Christian Social Union (CSU) -- the Bavarian sister party to Merkel's CDU -- has been able to retain the loyalty of such voters while still managing to keep the enemies of democracy at arm's length. You don't have to like CSU leader Horst Seehofer, but he is reliably playing his role in the country's political spectrum.

But what exactly did the CDU stand for in this election? For the policies of Angela Merkel? Or for the divergent positions represented by CDU candidates Julia Klöckner in Rhineland-Palatinate and Guido Wolf in Baden-Württemberg? Both campaigned in opposition to Merkel's refugee policies, and both led their party to disappointing showings.

Are the Greens still to be considered an alternative? Or has the party become just as bourgeoisie as its superstar Winfried Kretschmann? Even if it is just to pacify conservative voters, the Baden-Württemberg governor will occasionally even show sympathy for the hardline refugee crisis positions of Horst Seehofer. He rode the strategy to an historic victory for his party in the state on Sunday, garnering 30.3 percent of the vote and marking the first time that the Greens have won a significant state vote outright. But his party did poorly in the other two states where voters cast their ballots on Sunday.

And could someone please let us know what exactly the Social Democrats still stand for? A liberal refugee policy? Social projects more geared toward Germans? Everything at the same time as long as it allows them to stay in government? It would seem voters don't know either. The SPD may have squeaked out a victory in Rhineland-Palatinate, but in the other two states, the party flopped to historically low results.

Finally, the Left Party. Does the party still follow a policy of welcoming the refugees? Or, as federal parliament floor leader Sahra Wagenknecht recently said, do migrants have to take care that they don't "forfeit" their "right to hospitality?"

When it becomes increasingly difficult to identify what established parties stand for because they are constantly sending out mixed signals, then it will be increasingly difficult for voters to cast their ballots for one of them. If Germany's traditionally powerful centrist parties -- the CDU and the SPD -- want to remain strong, they have to clearly define where they stand in the democratic spectrum. And they have to engage in political debate -- with each other and with the AfD.

The strategy of presenting a single, uncontestable solution to a complex and varied problem must be re-examined. Otherwise, we are facing an era in which those who have no solution, those who only offer rejection and fear, will grow stronger and stronger. 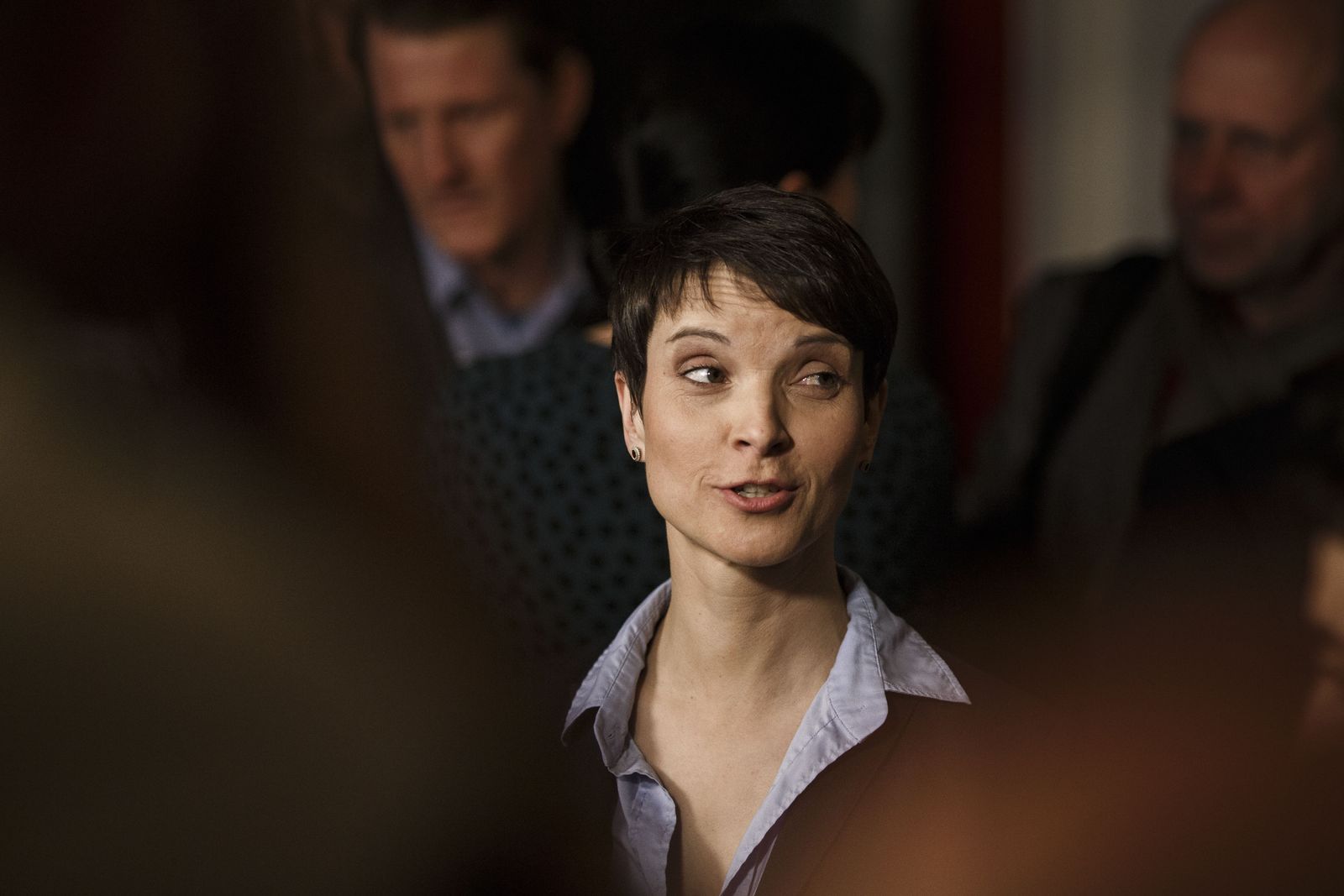 Frauke Petry, head of the right-wing populist Alternative for Germany, guided her party to an historic election result in Sunday state elections.