Until recently, the right-wing populist party Alternative for Germany (AfD) had been accustomed to success. In state election after state election, the party brought in double-digit results, including an eye-popping 24.3 percent in Saxony-Anhalt in March 2016 and, in Mecklenburg-Western Pomerania last September, 20.8 percent -- beating out even the center-right Christian Democrats. The party even managed 14.2 percent in Berlin that same month.

Since then, however, the optics haven't been so great. In the Saarland vote earlier this year, the AfD limped over the finish line with just 6.2 percent of the vote before falling even further on Sunday in Schleswig-Holstein, to 5.9 percent.

State-by-state comparisons are only marginally helpful, of course: The right wing has traditionally done better in eastern German states than in the west. But it is also true that Sunday's result was the lowest vote share the party has received since way back in May 2015, when it received 5.5 percent in Bremen. And that election came as the fledgling party was just beginning to become a presence on the national political stage.

Since the Schleswig-Holstein debacle, it now seems possible that the AfD might even fail to surpass the five-percent hurdle, necessary for parliamentary representation, in Germany's general election on Sept. 24. Just recently, Horst Seehofer, the head of the Christian Social Union (CSU), the Bavarian sister party to Chancellor Angela Merkel's Christian Democrats (CDU), said "it is by no means certain that the AfD will win seats in the German parliament." Television pundits analyzing the Schleswig-Holstein vote on Sunday evening voiced similar doubts.

It is a tempting narrative to believe. After all, during its recent party convention in Cologne, the AfD once again had a full-scale leadership meltdown. Erstwhile face-of-the-party Frauke Petry, who many thought was going to be the party's lead candidate this fall, was shoved aside, with Alice Weidel and Alexander Gauland now the party's co-candidates. Petry remains (for now) AfD co-leader with Jörg Meuthen, but the personnel reshuffle followed a drawn-out, and very public, feud. Furthermore, as with AfD leadership battles in the past, the result was another step toward the extreme right.

'Quite a Bit Better'

Yet nationwide public opinion polls continue to show that support for the AfD remains relatively stable. While the party is down from its 13 percent highs in January, a recent poll from early May -- taken after the fireworks in Cologne -- found 9 percent support for the AfD, putting it well ahead of the business-friendly Free Democratic Party (FDP) and the suddenly stumbling Green Party.

As such, the AfD leadership's public reaction to the Schleswig-Holstein result has been measured. Meuthen confidently predicted that, in this coming Sunday's state election in North Rhine-Westphalia, the party will do "quite a bit better" than in Schleswig-Holstein. He is expecting even higher results in the general election in September.

Gauland also noted at a Monday press conference that voters in Schleswig-Holstein had been focused more on issues such as education, infrastructure and energy -- none of which are particularly key to the AfD's rise since its founding in 2013. Others pointed to the difficult climate in the state, with the party's lead candidate in Schleswig-Holstein, Jörg Nobis, complaining of a "very, very difficult, very unfair campaign against us." The party noted that of 12,000 campaign posters posted, 10,000 of them were torn down.

Alice Weidel even felt sanguine enough to say that her personal goal for September national elections is 15 percent. Some in the party, though, aren't particularly pleased with Weidel's target. It is, after all, an ambitious goal, particularly given that the issue that propelled the AfD to significant support last year -- the refugee crisis -- has been fading into the background for months. Gauland, too, explains the AfD's relatively weaker present-day support with the fact that images of the refugee influx, now that they are coming in smaller numbers across the Mediterranean instead of along the Balkan route as they did in 2015, have largely disappeared from the news. "Some believe that we no longer need as much AfD," he said at the Monday press conference. "Unfortunately, that isn't true." (Gauland is notorious for his statement in 2015 that the refugee crisis was "a godsend" for the AfD.)

The AfD press conference (which the pregnant Frauke Petry, with her due date rapidly approaching, didn't attend) made it clear that the party is sticking primarily to its classic issues. Nobody knows, Gauland said, what will happen in July or August shortly before the election -- if refugee images will once again flood the television news or if Italian banks will slide into deep crisis. He also alluded to the party's deep Islamophobia: "I don't even want to imagine if there might be another terrorist attack."

Beyond the issues, though, the party has high hopes for an attribute that has long been missing from the party: unity. It is "completely clear," Gauland said on Monday, that voters aren't interested in a squabbling party. "Those times are over," he promised.

Perhaps. But first, the party's hopes lie with the deeply divided state chapter in North Rhine-Westphalia. For months, the party fought over who would get which spot on the party list ahead of the election -- and the compilation of the list for the national election has been no less turbulent. Such lists are vital in that, in a system in which the electorate votes for parties rather than candidates, they determine who ends up occupying the parliamentary seats a party wins in elections. The higher you are on the list, the better your chances to become a parliamentarian.

State party head Marcus Pretzell, who is married to Frauke Petry, is a controversial figure in the AfD, with many seeing him as an unscrupulous schemer. As the party was assembling its state list for the national elections a few weeks ago, Pretzell suffered a painful defeat, with delegates putting his long-standing opponent and state chapter co-head Martin Renner at the top of the list. Renner is part of the right-wing populist party's extreme right wing.

For an extended period, the infighting in North Rhine-Westphalia had little effect on the AfD's survey results in the state, just as national surveys have seemed to show that support remains unchanged despite the party's deep divisions. But in the first week of May, a survey found that only 6 percent of North-Rhine Westphalian voters plan to cast their ballots for the AfD, down from double-digit support just a few weeks ago. It is the worst survey result for the party since December 2015.

Such an outcome, of course, would be a disaster for the party in the final state vote before national elections. And it would almost certainly fuel even more speculation about the party's possible demise. 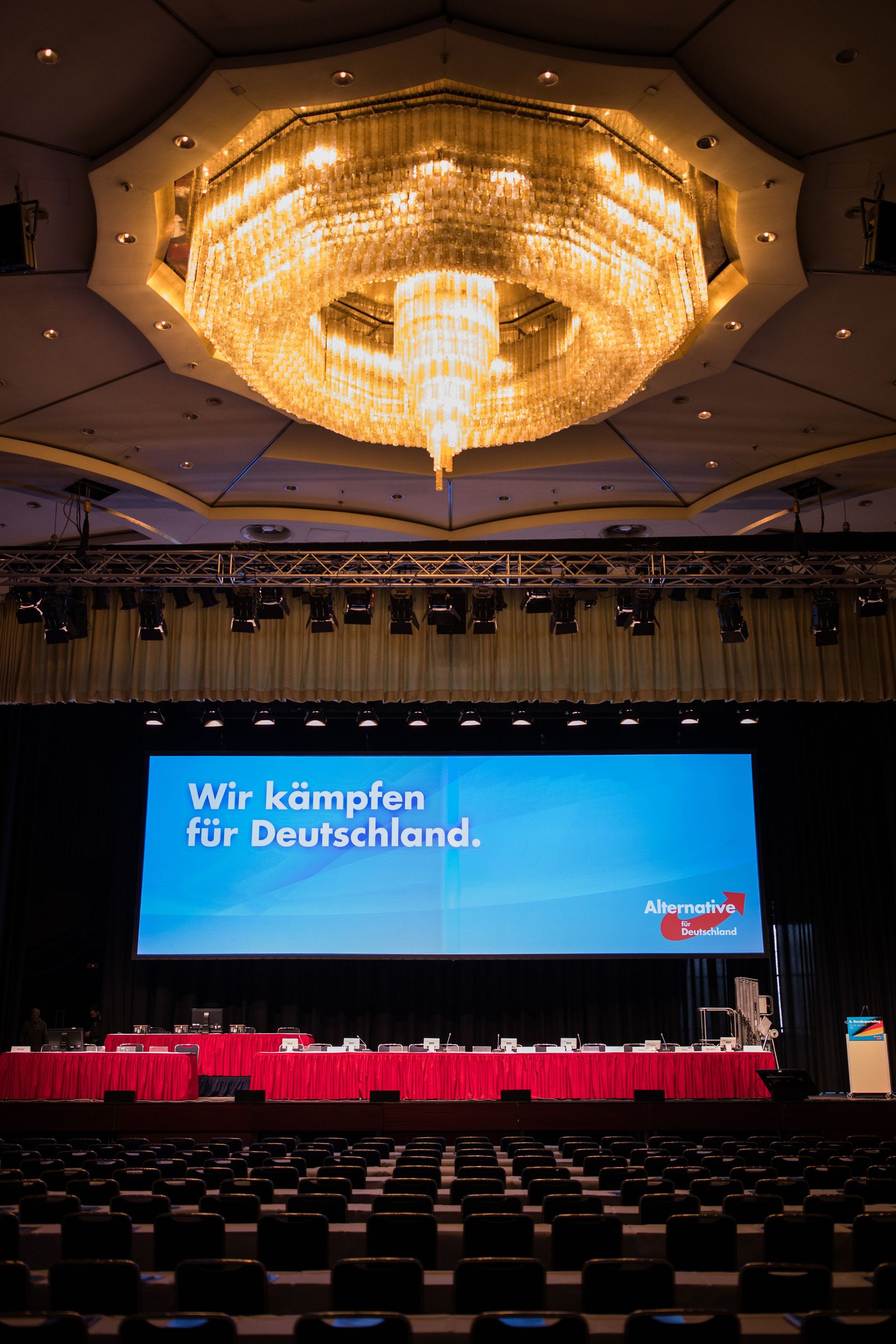 The site of the AfD's recent party convention in Cologne