The journey to Lichtenhagen takes 40 minutes by tram. That's how far the district is from the center of the northeastern German city of Rostock.

Lichtenhagen is home to the so-called Sunflower House. Twenty years ago, this 11-story apartment block housed the so-called "central reception center" for asylum-seekers in the state of Mecklenburg-Western Pomerania. Most of the people staying there were Sinti and Roma from Romania, and Vietnamese workers who had come to eastern Germany on temporary work assignments when it was still a fellow communist state.

On Aug. 22, 1992, the building was attacked by a mob, who threw stones and Molotov cocktails at the high-rise. The crowd of up to 3,000 people was made up of both curious onlookers and rioters, including many people from Rostock, according to eyewitnesses. For five days, the area was gripped by a pogrom-like atmosphere. Images of enraged youths, burning buildings and retreating police officers circled the globe. It was the most violent xenophobic riot in the history of postwar Germany. There it was again, this other Germany, the dark one.

Today, area residents claim that the crowd had been made up of "outsiders." They say these people harassed the Sinti and Roma who were camped outside the high-rise due to overcrowding. Residents also say that it was "outsiders" who threw the Molotov cocktails at the tower block, trapping 150 people -- mostly Vietnamese -- inside. In their defense, they add that they had always lived on good terms with the Vietnamese.

From these statements, it is clear that, two decades after the clashes, the residents of Lichtenhagen continue to view themselves as victims of external forces. They also play down their own role in the pogrom. But not all of them. For 20 years, Wolfgang Richter has been trying to explain what happened. "It started as a Rostock affair," he says.

At the time, Richter was working for the city authority in charge of handling foreigners. He was one of the people trapped in the tower block and witnessed the riots from the very beginning. He says that it wasn't until Sunday, Aug. 23, that the first right-wing extremists arrived and started directing the violence. "The Nazis had jumped onto a moving train," he says. 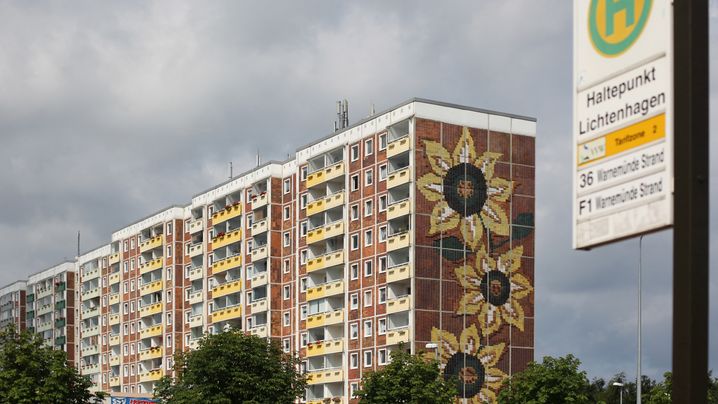 While still trapped in the apartment block, Richter swore to himself: "If you make it out of here alive, you have to do everything possible to make sure that the politicians responsible are held accountable." Richter is convinced that officials could have prevented the clashes if they had reacted to the warnings, worries and complaints of area residents.

At the time, Roma and Sinti were camped outside the Sunflower House and not being let into the shelter. They were forced to live under balconies and relieve themselves in the bushes. It was a hot summer, and the area reeked.

Conditions had become unbearable, says Erika Müller, who lives in the building today. "Politicians had abandoned us," she says.

Müller is one of the few local residents who will speak openly and allow her name to be used. She's fed up. Others prefer to play the issue down and remain anonymous. "But that was so long ago," says a woman on the street. "We don't need to talk about this anymore."

Trying to Keep the Memories Alive

The woman also doesn't know what to think about the tent standing on the lawn behind the former shelter. The tent is a kind of temporary memorial erected for the anniversary by "Bunt Statt Braun," a Rostock-based association promoting intercultural understanding and tolerance.

The tent, which is used to host workshops for children and youths, looks out of place between the complex's high-rise towers. It will be joined by several stages throughout the area for the main day of commemoration, which will be held on the weekend. Among the speakers will be German President Joachim Gauck, who was born and raised in Rostock himself.

Many locals would maybe prefer to forget about the episode, but the city and country want to continue talking about it. On and around the anniversary, Rostock is holding a number of events on racism, xenophobia and tolerance. Teachers in the high school in Lichtenhagen are trying to "sensitize" their students to such issues. "Our oldest student was born in 1994," says school superintendent Olaf Meyer -- in other words, two years after the pogrom. "Many kids don't have any idea about what happened back then."

Lenkeit is a 60-year-old Vietnamese immigrant who prefers not to have her last name published. On Friday morning of last week, Lenkeit was sitting in Son Ca, an Asian food market in Lichtenhagen, taking a break after making her morning purchases. Twenty years ago, Lenkeit was one of the people trapped in the Sunflower House. She only made her way to safety after she and some others broke open a door leading to the roof.

"I'm still afraid whenever I think about it," Lenkeit says in broken German. "But whenever new people arrive, we talk to them about it." By "new people," she means other Vietnamese people who settle in Rostock -- and their children. They explain to newcomers what happened back then. But either they don't explain it well enough, or the young people just don't care.

Trâng Tran, 21, doesn't look like she would give the matter much thought. She scurries through the market, zipping back and forth from the shelves to the checkout counter, passing frozen shrimp and golden Buddhas. "I think this Sunflower House was on fire," she says. "But I've also never really understood how that happened."

Lenkeit is afraid again. She's worried about the coming weekend. "Maybe NPD comes, dangerous," she says, referring to the far-right National Democratic Party (NPD), which has gained a strong foothold in the state. Described by the German domestic intelligence agency as "a racist, anti-Semitic, revisionist" party, the NPD scored 6 percent of the total vote in state elections in September.

Outside, a local resident is passing by the tent on her way to the supermarket. "Write that I'm scared stiff of the extremists," says the women, who declines to give her name. Her voice gets louder when the conversation turns to the tent. "I never go there. I'd just start complaining again. If they try to blame all of that on the local population again … I'll explode!"

Two bored men are sitting inside the tent. They set up the tent and now have to guard it. They say that local residents sometimes come inside to look around. Some of them even ask with concern whether the tent belongs to the NPD and if it's been set up for the anniversary.

All of Germany has its eyes on Lichtenhagen these days. It wants to remember and commemorate the terrifying things that happened here 20 years ago. But many locals just want to be left in peace. They are repressing the events of 1992. "It will still be a while before many people can talk about it," says Meyer, the school superintendent. "Because they're ashamed of what happened."