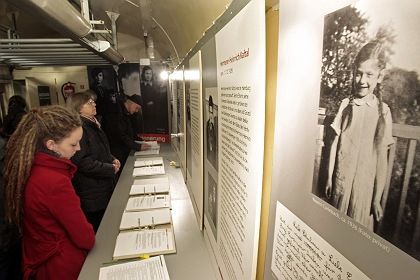 A row over a traveling Holocaust exhibition has heated up after Germany's national rail operator, Deutsche Bahn, refused to let the train-mounted exhibition be shown at Berlin's main train station.

The organizers of the "Train of Commemoration", which commemorates the fate of around 1.5 million children and youths who were transported to concentration camps by the Reichsbahn, had hoped to display the exhibits at Berlin's Hauptbahnhof station to ensure that as many people as possible would get to see them.

However, Deutsche Bahn refused to let the exhibition be shown at the Hauptbahnhof. The company proposed the use of other train stations as an alternative, but the organizers turned the offer down. The organizers now plan to hold a protest on Saturday at the Brandenburg Gate in central Berlin, before undertaking a silent protest at the company's nearby headquarters.

The Berlin-based International Auschwitz Committee, which represents the interests of Holocaust survivors, expressed its anger at the company's behavior Monday. The committee's president, Noach Flug, told the German news agency DPA that Deutsche Bahn had taken an "undignified stance." He added the company had damaged "Germany's standing and acted as encouragement to extreme right-wing groups in Europe."

A spokesman for Deutsche Bahn said the company was upset by the accusations, which were made despite its "lengthy and active attempts" to commemorate the past. "The many initiatives of Deutsche Bahn show the opposite is true," DPA quoted the spokesman as saying.

The "Train of Commemoration", which has been organized by a private initiative, has been travelling through Germany since November. Stopping in over 30 cities, its destination is the Nazi concentration and death camp of Auschwitz, where it is scheduled to arrive on May 8, the anniversary of the end of World War II in Europe.

The exhibition consists of photos, archive material and oral testimony that tell the story of the railway's role in transporting children from across Europe to their death.