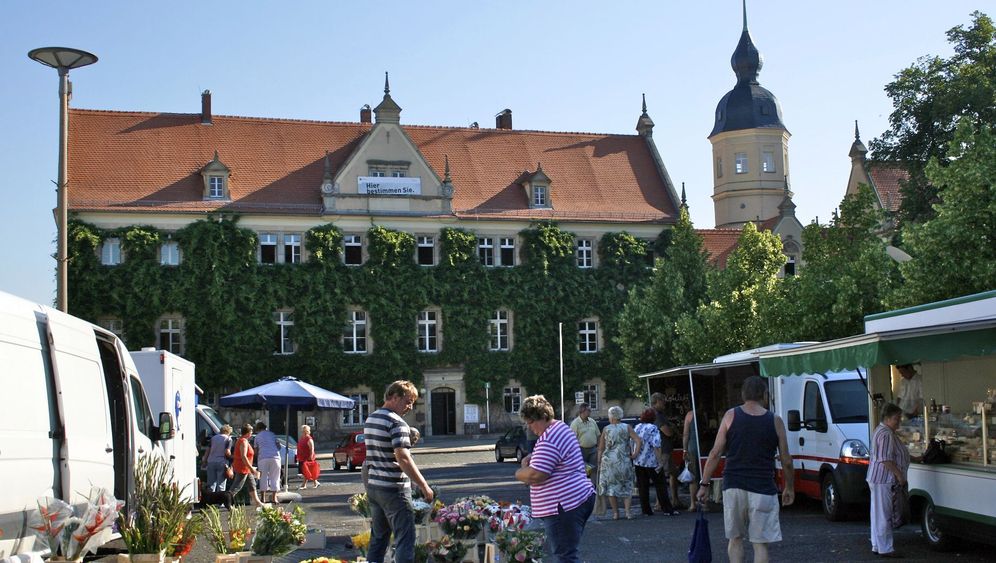 In theory, Gerti Töpfer should be celebrating these days. Töpfer, who is the mayor of the small town of Riesa in the eastern German state of Saxony and a member of the conservative Christian Democratic Union (CDU), is being feted all over Germany for her efforts to combat right-wing extremism.

The 56-year-old mayor seems stressed, however, as she sinks into a white leather chair for an interview in her office in Riesa's town hall, where a sign in the stairwell reads "Diversity Is Good."

Töpfer explains that the phone in the town hall has been ringing off the hook ever since it was announced that a Riesa street was, as a result of her initiative, going to be renamed after Hans and Sophie Scholl, young members of a resistance movement in Nazi Germany who were executed and have become folk heroes in modern-day Germany. People have been calling the mayor to congratulate her on her courageous action.

The move is regarded as a particularly brave step because Deutsche Stimme, the publishing house of the far-right National Democratic Party (NPD), is located on that very street. The right-wing extremist publisher would hence be forced to incorporate the names of anti-Nazi resistance fighters in its letterhead. A nice coup for the mayor, it would seem.

Indeed, Töpfer is pleased about the sudden attention. The only problem is that very few callers are interested in what else she has achieved for the town over the past seven years. All they care about is the fact that Riesa is an NPD stronghold. "It's annoying," Töpfer says, suddenly looking tired.

The story of Riesa and the NPD is a long and bitter one. Deutsche Stimme has been publishing the NPD party newspaper of the same name, which consists largely of incitement against immigrants, in the town for the past 10 years. The publisher also has a mail order business called the "National Department Store" offering, among other things, replica aviator watches from the Nazi era. Prominent NPD politicians such as Holger Apfel and Jürgen Gansel have moved their offices to Riesa. Their wives, meanwhile, have apparently been trying to infiltrate voluntary organizations for children and young people in the town.

The town is set to elect a new mayor on Aug. 22, and Töpfer is running for reelection. The issue of the far-right has divided the local political parties. Töpfer herself seems to have no idea how to address the far-right in her election campaign, apparently out of fear of damaging the town's reputation. In her election program, there is not a single line about the NPD politicians or the Deutsche Stimme publishing house.

Journalist and blogger Thomas Trappe, however, believes that the town's problems should be openly acknowledged -- something that has caused him to fall out with the mayor. The 29-year-old writes about the NPD on his personal blog about Riesa, in an attempt to demystify far-right agitators like Gansel and Apfel who try to cultivate a respectable image.

Töpfer, however, sees Trappe as someone who lacks sensitivity for the town. Many of his blog entries were below the belt, she says. "You can tell that he does not come from Riesa."

Trappe's blog was nominated this year for the prestigious Grimme Online Award. On his blog, Trappe describes, without mincing his words, just how helpless the democratic parties and the administration are in their efforts to deal with the NPD. Recently he made fun of a CDU politician who apparently replied to e-mails from the NPD with the single word "asshole."

Trappe is sitting in a café in Riesa's renovated pedestrian zone, sipping a Coke. Most of the town's residents have no problems with far-right extremists, he believes. "They consider the NPD to be a normal party." The party's anti-immigrant stance comes across well in a town like Riesa where the unemployment rate is 11 percent.

If you ask around in the town's kebab shops and Asian fast food restaurants, few people are willing to admit having had bad experiences with customers who wear Thor Steinar, a clothing label favored by neo-Nazis. Those are just ordinary people, comes the curt reply.

'People Try to Gag Me'

Thoralf Koss is one of Trappe's allies. He is a 46-year-old teacher who also favors taking the far-right on openly. "You're writing about our mayor's heroic acts?" he shouts into the telephone. "I'll come by in 15 minutes and pick you up."

In the car, Koss begins his tirade. He argues that the renaming of the street is yet more proof of how Mayor Gerti Töpfer changes her position depending on which way the wind is blowing. Koss is a member of the town council for the Green Party, although he himself is an independent. He is engaged in a perpetual struggle with Töpfer and is also running for mayor.

Koss can hardly contain himself. "I've been fighting the NPD for years, and people try to gag me," he says. Töpfer has accused him of damaging Riesa's reputation, he says, as if he were to blame for the town's image. No matter where she goes in Germany, the mayor apparently complained, the name of Riesa is associated only with neo-Nazis -- because Koss, she said, takes every opportunity to draw people's attention to that fact. "And now Töpfer is being seen as a great fighter against the far-right," Koss complains.

Koss stops his car in front of a single-family house barely three blocks from the Deutsche Stimme offices. This is where he is preparing his election campaign. As it happens, he almost didn't manage to secure his candidacy. The local Green Party is angry with him because he supported the NPD in a town council vote -- because he considered their motion, which involved reducing council members' allowances, to be sensible. If the NPD were to finally be banned, he would no longer face such moral dilemmas, Koss says.

He wants to use local business tax revenues from the Deutsche Stimme publishing house to fund education programs in Riesa to raise awareness about right-wing extremism. His goal is to make his students immune to propaganda efforts by neo-Nazis, who distribute pamphlets and CDs with music by far-right bands in schoolyards.

In the Riesa sports stadium, it becomes clear just how strong the far-right is in the town. The semi-final of the World Cup, where Spain is playing Germany, is being shown on giant screens. Men with shaved heads openly sing the old first verse of the German national anthem, which included the notorious phrase "Deutschland über alles" and which is no longer part of the official version due to its Nazi associations. Nobody seems bothered by their T-shirts featuring images of tanks or their neo-Nazi tattoos. When the German team loses the game, garbage cans start flying through the hall.

Given such conditions, Andreas Näther, a member of the center-left Social Democratic Party must feel a sense of desperation. He has been involved in the fight against right-wing extremism for years: He already took part in a protest march through Riesa's industrial zone back when Deutsche Stimme moved into its offices there. Näther would surely make a convincing mayoral candidate because of his work taking on the neo-Nazis. Unfortunately, the SPD has not put forward its own candidate for the upcoming election.

Näther, a well-built 52-year-old man with a moustache, is a member of the town council and the head of an association that works with young people. Recently he got together with his colleagues from other similar organizations to launch an appeal against the infiltration of youth centers by neo-Nazis.

The NPD is getting increasing bold in its attempts to hinder the work that youth clubs are doing to try to teach young people about democracy, says Näther. He says that colleagues of his recently had a run-in with Jasmin Apfel, the wife of NPD politician Holger Apfel. Jasmin Apfel allegedly approached a club for children and young people to try to get involved as a volunteer. As a result, Näther now wants to train his staff in how to deal with supposedly well-meaning parents who in fact want to recruit young people for the NPD under a veneer of respectability.

When asked about the work of Thoralf Koss, who he knows from his time in the opposition movement in the former East Germany, Näther shakes his head. Koss, he says, refused to support his recent appeal, because it did not also condemn left-wing extremism. "And yet we clearly referred to Deutsche Stimme as a problem," Näther says.

Amid such disputes, the different political parties have lost sight of their real goal. The NPD has set up its propaganda center in the town and shows no signs of leaving. Many people wish the democratic parties would at least work together in the fight against the right-wing extremists.

Meanwhile Gerti Töpfer is hoping for reelection -- and that the neo-Nazi menace will somehow go away by itself. She's been hoping for that for years.