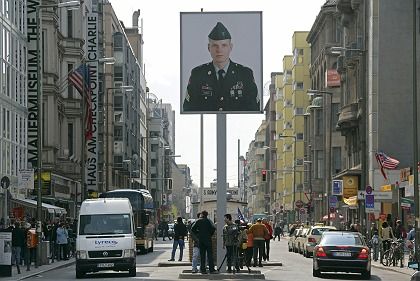 Checkpoint Charlie in Berlin: Several famous politicans have backed a campaign to build a Cold War museum nearby.

A host of former statemen and other political heavyweights have thrown their weight behind a campaign to build a Cold War museum in Berlin that would tell the story of the 20th century conflict in all its aspects. Former Czech President Vaclav Havel, former German Foreign Minister Hans-Dietrich Genscher, former US Ambassador to Germany John Kornblum and several other well-known political figures are calling for a museum to be built at Checkpoint Charlie, a Cold War flashpoint that is now a popular tourist attraction.

In a statement published Tuesday, they ask the German government and Berlin Senate to safeguard a piece of land next to the former checkpoint "for the establishment of a Cold War museum to safeguard for the long term the memory of the division of Europe and its liberation."

The vision for the museum is to transform Checkpoint Charlie, which was the most famous crossing point between East and West Berlin during the period when the Berlin Wall divided the city, from a mere tourist attraction into a place where visitors can learn about the Cold War -- not just in Berlin but all over the world.

Markus Meckel, a member of the German parliament and one of the driving forces behind the campaign, told SPIEGEL ONLINE that, despite the many Cold War memorials in Berlin, there was no museum that looked at the whole conflict, examining the division of the world, the proxy wars, the arms race and the pervasive fear. "What has received far too little attention is the conflict's international dimension," he said. "There's no place in Berlin -- or, for that matter, in the world -- that looks at the division of Europe and the world. And what better place could there be for such a museum than Berlin?"

John Kornblum, who served as the American ambassador to Germany from 1997 to 2001, told SPIEGEL ONLINE he supported the museum plan because it was "very worthwhile to treat the conflict in a serious way." He added there were lots of "dramas and misunderstandings" about the Cold War that needed to be dispelled. "The division of Germany and Europe is among the most important eras -- you can't even call them an event -- in modern history," he said. "But it was much more than merely a confrontation between Russia and the United States."

According to the campaigners, an empty piece of land near Checkpoint Charlie would be the ideal location for such a museum. A property developer is planning to build on the site, and Meckel is calling on politicians to integrate their museum proposal into the site's development plans.

The appeal, which was drawn up by Meckel and three academics, was timed to coincide with a meeting of the German cabinet on Wednesday, when ministers will discuss proposals by Germany's federal commissioner for culture, Bernd Neumann, on a new strategy for Germany's numerous memorials. According to Meckel, who was politically active as a dissident in communist East Germany from the 1970s onwards, the museum could be integrated perfectly into the new memorials strategy.

The promoters of the scheme want to ensure that, 20 years after the end of the Cold War, memories of the conflict, which dominated the second half of the 20th century, do not fall by the wayside. "The world has changed so dramatically that it is difficult to recall what a threat this war posed and how it was resolved," they state in their appeal. They worry about the experiences of the conflict being forgotten: "The generation born after 1989 has no personal memory of the suppression and division of the continent."

The appeal adds that even visitors to Berlin often have "immense difficulty in finding traces of the once all-pervasive conflict." In fact, a survey published earlier this year found many visitors to Berlin were disappointed by how little of the Berlin Wall had been left standing.

The idea of building a Cold War museum is not a new one. A working group in the Berlin Senate has looked at the idea as part of an integrated strategy for the Berlin Wall in which the museum could function as a place to learn about the mechanisms behind the escalation and de-escalation of political conflicts.

To turn their vision into reality, the promoters of the Cold War museum are looking for financial support -- not just from the federal government and the state of Berlin, but also from the European Union. They are also looking for donations.

According to the German newspaper Süddeutsche Zeitung, the project so far has not had any backing from Russia. However, the paper's Tuesday edition reports that former Russian leader Mikhail Gorbachev approved of the museum, although he did not have time to actively support it.