The Krümmel nuclear power station near Hamburg was shut down on Saturday after a fault in a transformer, blacking out most traffic lights in the German port city and interrupting the water supply to thousands of homes. 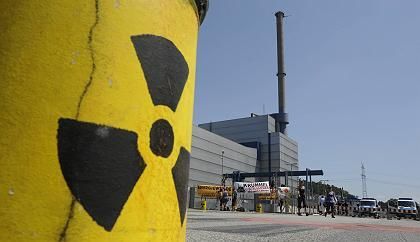 Power company Vattenfall said there was no release of radioactivity and no danger to the public as a result of the incident, which occurred just two weeks after the plant was restarted following a two-year shutdown caused by a fire in a transformer.

Environment Minister Sigmar Gabriel of the center-left Social Democrats called on Chancellor Angela Merkel's conservatives to abandon their demand to delay the planned shutdown of the country's oldest reactors in the coming years.

The previous German government of SPD and Greens introduced the phaseout program for the 17 nuclear reactors by 2021. But the conservatives argue that nuclear energy must be kept alive to allow renewable industries to catch up as Germany must meet long-term commitments to cut carbon dioxide emissions.

Gabriel said the problems at Krümmel were a further indication that Germany's eight oldest reactors needed to be shut down immediately, and that Germany needed to introduce a nationwide authority to monitor the power stations. At present, the plants are monitored by regional authorities.

Asked if he was turning the Krümmel shutdown into an election issue, Gabriel told ARD television on Monday: "I didn't organize this incident, it was the nuclear industry that claimed that something like this couldn't happen."

The industry's claim that Germany has the safest nuclear reactors was wrong, Gabriel said, adding: "German reactors are susceptible too."

Bavarian Environment Minister Markus Söder of the conservative Christian Social Union, sister party to Merkel's Christian Democrats, said Germany needed to slow down the phaseout. "We can't simply replace the 60 or 70 percent of electricity we get from nuclear plants in Bavaria with other plants overnight, especially not with coal-fired power stations as Gabriel wants," he said.

Germany needs to hold on to nuclear plants "until we can completely replace them with regenerative technology," Söder added.

Vattenfall said it was examining the problem and couldn't say when the plant would be restarted. It said there had been a short circuit in one of its two transformers that connect the plant with the electricity grid.

"As a consequence of this, the plant was disconnected from the grid. According to plan, the plant had a quick shutdown after that," the operator said in a statement on Sunday. "In this procedure 205 steering rods are shot into the reactor core automatically.

"() this occurrance took place within two seconds. Afterwards the reactor was depressurized and is now in the so-called cooling mode. A different grid ensures the electricity needed for the cooling process."

Vattenfall added that the quick shutdown was rated as an incident below the International Nuclear Event Scale ("INES zero").