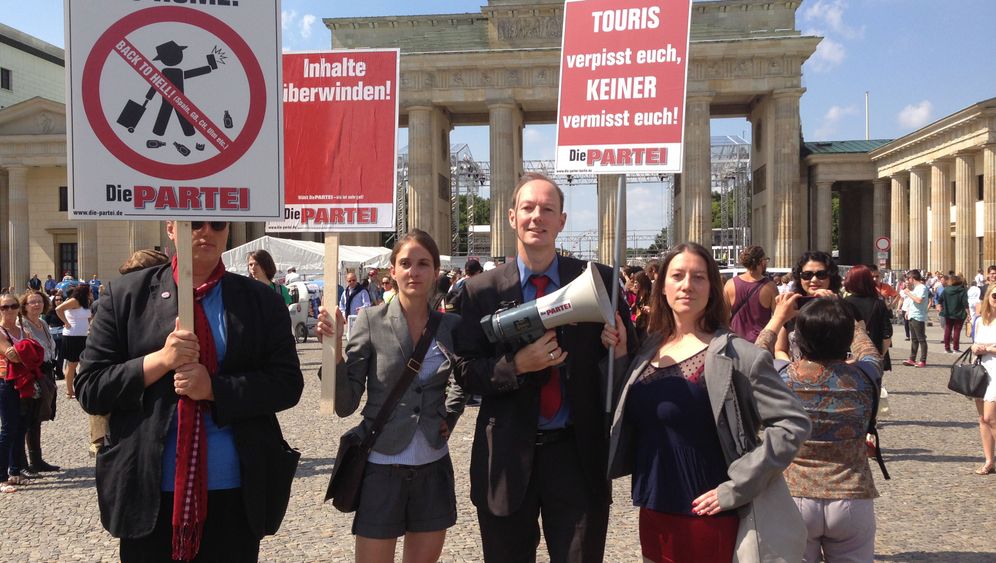 With a 17-point lead over her closest challenger, German Chancellor Angela Merkel is thought to be all but unbeatable in the Sept. 22 general election. Yet one political party thinks it has what it takes to unseat her and has embraced an unusual strategy to do so. Die Partei, or The Party, a small irreverent political party, held a rally at the Brandenburg Gate in Berlin on Thursday afternoon to protest against tourists.

"Tourists, you're welcome. And please don't come to Berlin," party chairman Martin Sonneborn, who is also co-publisher of German satirical magazine Titanic, shouted into a loudspeaker. Perplexed-looking bystanders hovered around him and his cohorts, who held placards announcing, "Tourists, piss off. No one misses you" and "T(err)ourists go home! ... Back to Hell! (Spain, GB, CH, Ulm, etc.)"

A line of Die Partei members held an oversized banner reading, "No Legroom for Tourists."

The message didn't seem to be winning converts here at Pariserplatz, or Paris Square, one of the most visited tourist attractions in Europe. At the edges of the rally, Spaniards in backpacks posed with a fake Russian soldier handing out passport stamps, a vaguely drunk-seeming Mickey Mouse mugged for an Irish tour group and a circle had formed around shirtless men breakdancing to a Michael Jackson song for spare change.

"There are enough tourists in the city!" Sonneborn continued, clutching the megaphone. "We don't like tourists! Please go back to your home!"

The protest is a play on a debate in recent years in Berlin on how mass tourism threatens to transform the Brandenburg Gate, an important historical site in the city, into a a cheap Disneyland-like attraction.

'Our Chances Are Very Good'

On July 5, Die Partei was officially approved as one of 38 parties eligible to run in federal elections. Founded in 2004, the party once campaigned on a platform of rebuilding the Berlin Wall. It has a youth wing called the "Hintner Youth" (named after general secretary Thomas Hintner) whose official greeting is "Hi Hintner!" and it has organized advocacy groups such as "MILFs Against Merkel."

Clearly not one to play it safe, Sonneborn is probably best remembered outside Germany as the man who appeared in blackface as American President Barack Obama on a campaign poster for Berlin state elections back in 2011. "Ick bin ein Obama" read the poster in a play on John F. Kennedy's famous "Ich bin ein Berliner" speech. The picture went viral and Sonneborn was accused of racism. He was just making fun of German politicians, he said, there was nothing racist about it.

As for Die Partei's chances in the upcoming national election, the first in which it has been allowed to officially participate, Sonneborn is optimistic. "Our chances are very good," he said at the rally. "We are banking on an election result of 100 percent, plus."

And what about the supposedly unassailable incumbent? "I think Merkel's chances are quite low," he said. "She engages in passionless politics, which, like her, have no position. And I think that the chances are great that Merkel will have to justify herself in a stadium from within a cage once we have won the election." The cage scenario may be unlikely, but some are certainly glad to see Sonneborn and Die Partei in what has otherwise been one of the most boring election seasons in recent memory.

Ten meters away from Sonneborn, another Die Partei representative handed out flyers to a group of teenagers on a school trip. "Endlager: Prenzlauer Berg?" one girl in short shorts and neon sunglasses read aloud quizzically from the flyer. "Endlager" is German for "final disposal site" and has become a buzzword in the country in reference to a debate over the disposal of radioactive waste. Prenzlauer Berg is a recently gentrified neighborhood in what used to be East Berlin that is now popular with fashionable young families and, yes, with tourists. The girl seemed confused at how the two fit together. "It's just a hoax," one of her male companions told her knowingly, and they walked on.

"No," he answered. "Only rich people." Next to them, a dreadlocked man was helping a group of children blow oversized bubbles over the heads of the crowd.

"But don't you like to travel outside of Germany?" she retorted.

The Die Partei member smiled. "Oh yes, I like it quite a lot," he deadpanned. The women stomped away, just as a police officer approached the group and told them they had to take down their signs.