A democracy is fed with words, they stimulate the organism of a society. Politics comes alive and becomes recognizable and comprehensible in discourse. Positions become apparent, as do the affirmation and rejection of individual issues. If discourse is successful, it creates affirmation of democracy and politics as a whole.

In Germany at the moment, that discourse is far from successful. The country is suffering from malnutrition and undernourishment, it is wasting away. The right words are missing, especially words coming from the chancellor. Angela Merkel refuses to engage in a discourse on any of the most important issues. The head of Germany's government is serving up but a thin broth, if anything at all.

She has never been known for her grandiloquence, she is not a tribune of the people but an engineer of power. This has always been regrettable, but now it is becoming harmful. She has made some weighty decisions this year: Her government has pushed through a radically new energy policy, has pursued a restrictive policy on the European common currency and has approved the export of tanks to Saudi Arabia. Each of these decisions should have been accompanied by major speeches, but the speeches Merkel has given have been minor at best.

Her political communication is a disaster, and there are three reasons for this: incompetence, secretiveness and paternalism.

What is the goal of an administration's communication? The administration intends to convey to citizens that it is intelligently and concertedly working for their best interests. It hopes, of course, to paint an attractive self-portrait and uses legitimate public relations strategies to do so. It's the job of the media to peer behind these strategies and uncover the ugly hidden behind the beautiful.

But Merkel's government doesn't even give journalists the chance to pull back a veil, because it isn't even capable of creating one. Its efforts at communication are sometimes so incompetent that some things seem worse than they actually are.

Last Wednesday the chancellor, speaking in the Angolan capital Luanda, said that Germany wanted to help the country "in bolstering its navy." These words alone were enough to trigger a minor media frenzy. Nobody, it would seem, bothered to vet the comment prior to their delivery, particularly given the controversy over Germany's planned sale of more than 200 tanks to Saudi Arabia. And they immediately led critics to question whether the German government now intended to become an arms supplier to dubious regimes.

She later added that she was referring to coast guard patrol boats. Even that could generate some controversy, but at least it didn't sound quite as militant. To avoid the initial distress, Merkel should simply have mentioned the patrol boats right away, but she lacked the necessary judgment -- and words -- in the situation at hand, that is, the debate over tank exports. She communicated without a strategy, and the phrase "ships for Angola" was plopped into the world the way someone might drop a stone into a well.

The government's communication on the subject of tax cuts was even clumsier. With some saying one thing and others saying something else, it eventually became clear that the government intends to lower taxes. This too was done without a communicative strategy or plan. The disclosure of the coalition government's plans simply happened. There was no prior consultation or broad effort to solicit support from within the ranks of her coalition government. Not surprisingly, a dispute ensued. This isn't the way to paint an appealing self-portrait.

Not long ago, when government officials were clearly working on this portrait, their efforts revealed even more unpleasantness. During Merkel's visit to Washington in June, government spokesman Steffan Seibert made it clear to German journalists that questions about a possible visit to Berlin by US President Barack Obama would not be welcomed. It is a sensitive subject for Merkel because, when Obama visited Berlin as a candidate in 2008, the chancellor did not allow him to speak before the Brandenburg Gate. But by making such a request, Seibert was overstepping his bounds. In a democracy, journalists are responsible for the questions while politicians are the ones expected to provide the answers. This is a tried-and-true principle and requires no improvement.

The Berlin question was asked, and Obama replied that he might come to Berlin in his second term. Merkel said glibly that the Brandenburg Gate would certainly be there "for a while longer." Sometimes communication does work, but too often it is spoiled by incompetence.

A government doesn't have to communicate everything. There can be internal debates, of course, and there are state secrets that no politician is authorized to discuss. Meetings of Germany's Federal Security Council fall within the category of state secrets, but not the outcome of such meetings, and of course journalists can attempt to find out what was discussed at those meetings. Two weeks ago, SPIEGEL learned that the Federal Security Council had approved the sale of more than 200 Leopard II battle tanks to Saudi Arabia. A secret had been revealed, though Berlin has yet to confirm the information. Merkel and her cabinet refuse to discuss the subject -- and to ward off questions they refer to their duty to preserve state secrets.

This is the wrong approach. Once the news has been leaked, the discourse must begin. The export of such a potent weapon as the Leopard to Saudi Arabia raises many questions, especially in times of pro-democracy revolutions in the Arab world. The regime in Riyadh is authoritarian, and it can act with brutality against its own citizens and others. Furthermore, Saudi Arabia sent troops to neighboring Bahrain to stifle an uprising there. Riyadh could also use the Leopard tanks to crush a democratic revolution at home. Do Germans want to see German tanks on Saudi soil, firing at Saudi citizens? Can one imagine that unforgettable image from the Tiananmen Square revolt -- a man facing off against a row of tanks -- with protesters confronting German-made Leopards instead?

It's Time to Talk

Unlike the sale of refrigerators, the export of tanks has a strong impact on a country's image, both at home and abroad. Tanks bring death, and the sale of tanks suggests that the exporting country would like to see the buyers emerge victorious from future battles. Making such decisions clandestinely and behind closed doors is always a questionable approach. And prolonging the secretiveness even after one's determination to move forward with the deal has been revealed is nothing short of audacious.

Perhaps the German government has good reasons for the sale, but if that is the case, then we want to hear them. Those reasons must be subjected to discourse. The Saudi deal would lack legitimacy were the Merkel administration to continue to treat it as a secret, even though it had already been leaked to the public. Its refusal to discuss the issue is a sign of arrogance toward the public. Besides, it is silly to treat a secret as a secret when it is no longer a secret. It reminds us of children who believe that no one can see them as long as their eyes are closed, the principle being that if I can't see you then you can't see me. But this is not an appropriate rule for political communication. Merkel's secretiveness must stop.

Can someone bring desolation to a country? Merkel can. She proved it in the 2009 election campaign, when she gave dull, almost empty speeches, announced nothing and went easy on her opponent -- so that no one would get upset and the more diffident supporters of the center-left Social Democrats (SPD) would not be tempted to vote. She bet on low voter turnout and the strategy succeeded. It was a personal success, but not a success for democracy. About 30 percent of eligible voters stayed home, bored and left cold by a paucity of words. It was a negative record, and since then Merkel hasn't made the slightest effort to revive the democratic discourse -- even though there is plenty to talk about.

In the first half of 2011, world history unfolded at a dizzying pace, serving up the Arab revolution, the euro crisis and the Fukushima nuclear disaster. All of this feels threatening and politicians must react. The world changes as a result. And when there is change, those who feel the effects of change want to know why things are now different, and what new risks and hopes are coming their way. They want to hear reasons, explanations and visions.

Are the risks of nuclear energy truly so great that all German nuclear power plants must be shut down by 2022? Why are today's arguments the polar opposite of the arguments put forth in the fall of 2010, when the government advocated extending plant operating licenses? What is promising about the energy turnaround, that is, the switch to wind energy or natural gas? Why should the Germans rescue Greece? Wouldn't the deutschmark be much better than the euro? Is there even any hope left for the euro? Will prices rise and the standard of living decline soon? Is there still something promising about the European Union?

It is high time for speeches to the general public, time for major speeches, and it is certainly time for explanations. Merkel refuses to do this. Since the last election, the malnourishment of the country has only gotten worse.

Why is this the case? Is it her language, an inability to find good words, perhaps even important words? That's one factor. Merkel employs an unusual idiom, a Lingua Merkelae with many off-beat phrases and strange choices of words to express feelings. But that isn't the whole story. Merkel can be funny and charming in off-the-record conversations with journalists, and she can offer smart analysis. But as soon as she speaks in public, she almost always seeks refuge in her manuscript, which is usually a hodgepodge taken from the ghastly toolkit of the mid-level bureaucrat, a conglomerate of sentences that have been so vetted, rounded off and filed down that they have been stripped of their content and convey nothing but a depressing sense of despondency.

One explanation is the fear of one's own words. The chancellor doesn't want to rub anyone the wrong way or stir things up, because she knows how the media can amplify the impact of words. Instead, she prefers to sail quietly across the water.

A second explanation for her lack of a voice is the paternalistic trait she is developing. Maternalistic would be the more appropriate term for a woman, but it doesn't really apply to Merkel. Being paternalistic means: I make decisions for others based on what I think is best for them. I don't have to offer any real explanations because, after all, I know what is best for everyone. Others should comply with my wishes instead of lamenting, because I am, in fact, acting in accordance with their needs. This is how Merkel runs the country, even as she is being run by the country. In other words, she justifies her dominance by couching it in terms of the general welfare.

This is Merkel's unspoken paternalism. The secretiveness is part of it, and so is the incompetence, because it's a form of political arrogance, the arrogance of someone who thinks: I don't have to worry about strategies, because I'll reach my goals anyway, or at least the election victory.

Paternalism and democracy are not very compatible. A society cannot be likened to a family sitting together at the dinner table in past centuries. Discourse is essential. Discourse isn't just part of democracy; it's the essence of democracy. But without words it becomes nothing but a skeleton. 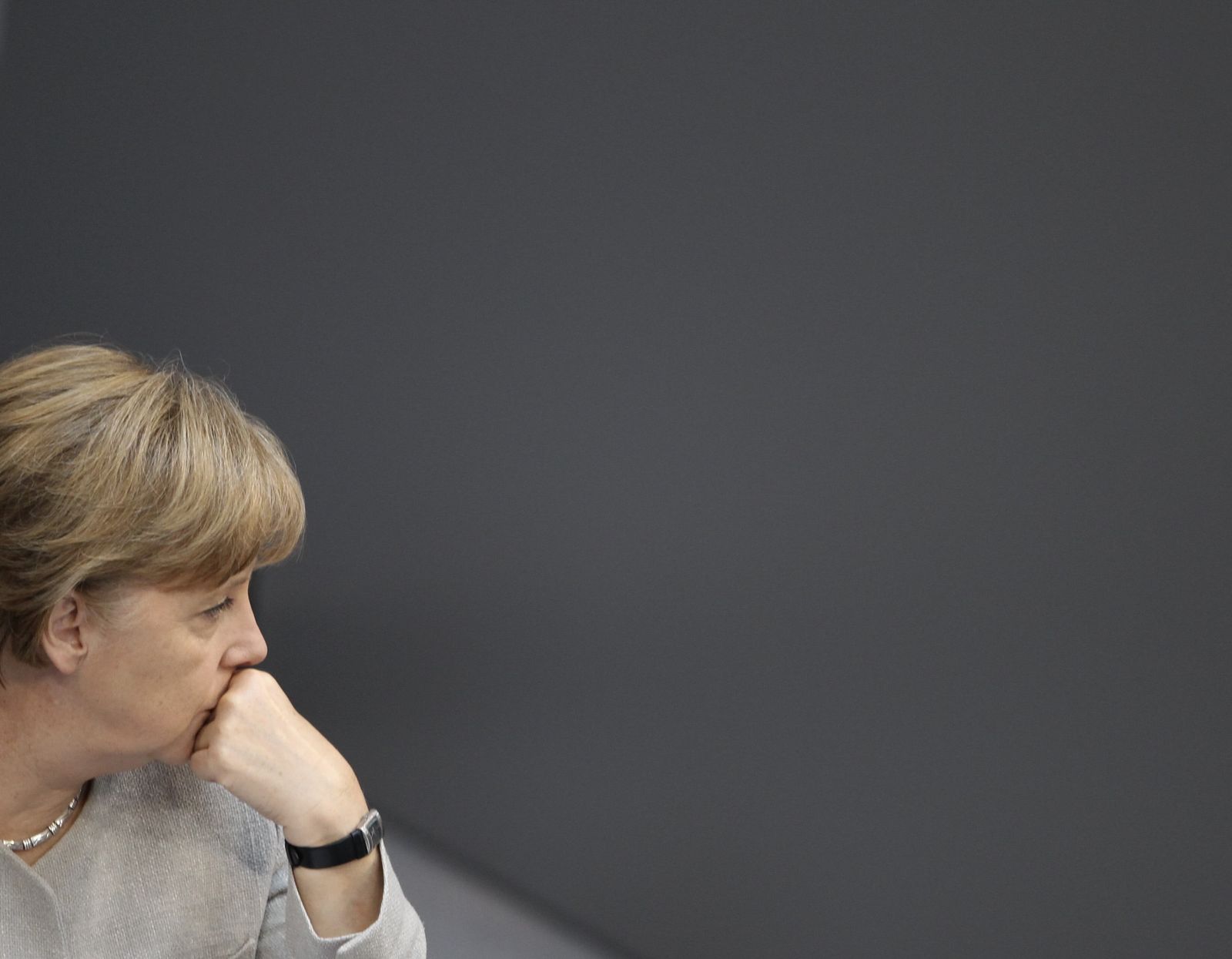