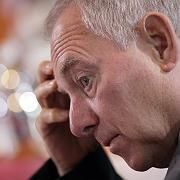 Schäuble said last week in an interview with DER SPIEGEL that Berlin would have to "clarify whether our constitutional state is sufficient for confronting new threats," and mentioned a ban on Internet or mobile phone use for terrorist suspects or even "so-called targeted killings" as potential but legally uncertain measures against a growing threat of terrorism in Germany. He's been in what German pundits call Erklärungsnot ever since -- a crisis of having to explain himself.

President Köhler told German TV on Sunday that he doubts whether "the killing of a suspected terrorist without a trial can be done quite so easily." He also questioned the public way Schäuble raised the idea.

Peter Struck, parliamentary chief of the SPD, told the Sunday weekly Tagesspiegel am Sonntag, "It won't do for basic values of our constitution to be called into question. Human rights and the right to life are untouchable. This also goes for Osama bin Laden's life."

Schäuble said in his SPIEGEL interview that the "legal problems" his office had to wrestle with "extend all the way to extreme cases such as so-called targeted killing  Imagine someone knew what cave Osama bin Laden is sitting in. A remote-controlled missile could then be fired in order to kill him."

" And the Americans would execute him with a missile," said Schäuble, "and most people would say: thank God."

Schäuble reacted to the criticism by telling Reuters TV over the weekend that he suspected his remarks had been misunderstood "on purpose, by people who don't want to have this debate  It's as if someone has said we suddenly want to shoot certain suspected terrorists dead here (in Germany). That's of course pure nonsense. No one wants to do that. And I have never suggested it."

But Schäuble has sparked outrage in the past with other crime-fighting suggestions, like e-mail and phone-message surveillance of the German public, or questioning the right of a terrorism suspect to be innocent until proven guilty. "Schäuble paints one horror scenario after another on the wall," said Struck, adding that Schäuble could "poison" the spirit of the grand coalition if Chancellor Angela Merkel -- Germany's ranking Christian Democrat -- refuses to rein him in. Merkel has stayed out of the debate, aside from saying she prefers a minister who isn't afraid of new ideas to a minister who follows the flock.

Schäuble sits in a wheelchair because of an attempt on his life in 1990, during his first term in office as Interior Minister. He told the Sonntag Aktuell newspaper over the weekend that a frank and open discussion of security matters was important and said it was "a defamatory insult" for some critics to suggest that his views were extreme and should be discounted just because "I myself have been a victim of an assassination attempt."

The minister was likely referring to an offensive passage in a piece from the Süddeutsche Zeitung last week which wondered out loud what role his disability plays in his thought processes. "A man who experiences -- and tries to overcome -- his own physical weakness each day, likely has more difficulty tolerating the perceived weaknesses of his colleagues or the perceived weaknesses of the state."