When it's not going well, even the smallest things go pear-shaped. Like a waiter in the SPD party headquarters dropping a tray full of glasses and bottles. Sunday night was an extremely bitter evening for the Social Democrats and for the party's chancellor candidate Martin Schulz. And he wasn't in the mood to deny it either. "I am incredibly frustrated," he said from the stage in Berlin.

His frustration stems from the results of the state election in Schleswig-Holstein, in which the SPD received 27.2 percent, far behind the 32.0 percent received by Chancellor Angela Merkel's Christian Democrats. The SPD had hoped that the Sunday vote would lend Schulz's candidacy a bit of momentum as the national campaign heats up ahead of the Sept. 24 general election. Instead, though, the center-left party finds itself facing the question of whether it can actually win elections under Schulz's leadership. Or whether the significant jump in the SPD's poll numbers following the announcement of Schulz's candidacy in January was little more than a chimera. After all, the state vote in Saarland five weeks ago also ended in disappointment for the Social Democrats.

On Sunday evening, party officials gathered in Berlin seemed eager to assign blame for the election defeat to outgoing Schleswig-Holstein Governor Torsten Albig as a way of protecting chancellor candidate Schulz. And the SPD incumbent did, in fact, make a few important missteps in the campaign. Perhaps the most important came in late April, when he gave an interview to the tabloid magazine Bunte together with his new girlfriend. In explaining his separation from his wife, Albig said in the interview that he had no longer been able to speak with her on the same level because of her role as fulltime housewife and mother.

The gaffe may very well have cost him another term as state governor, but the result is just as distressing for Schulz. "It is extremely painful," Schulz said on Sunday evening. Once again, the party was unable to win an election under his leadership -- and it is becoming a problem for him.

Now, Schulz is hoping that Hannelore Kraft, the mayor of North Rhine-Westphalia, can deliver a victory in state elections there next Sunday. She spent weeks this spring with a clear lead in public opinion surveys, but her CDU challenger Armin Laschet has recently closed the gap -- making it possible that another disaster for the SPD could be looming.

Nobody in the SPD wants to envision such a scenario. If Kraft isn't able to hold onto the governor's office in NRW, which has a long history of Social Democratic success, it would make Schulz's task of defeating Merkel, already an uphill battle, that much more difficult. Plus, Schulz is originally from the state.

As such, the pressure weighing on Schulz, and on Kraft, is immense. He has several appearances planned in the state over the next several days. "Tomorrow, we are going back to work," he said on Sunday in Berlin.

It is unclear, though, what he can do to recapture the winter magic which saw his party's nationwide survey results shoot up by almost 10 percentage points in the weeks following his candidacy announcement. On Monday, Schulz is holding an important speech at the Berlin Chamber of Commerce and Industry in which he will provide further contours to his economic policy. Thus far, his campaign has focused on fairness and he is hoping that his Monday speech will make it clear how he intends to achieve that goal.

But on the day after his party's defeat in Schleswig-Holstein -- and after the presidential elections in France -- it won't be easy for him to attract the attention he is hoping for. Campaign observers had already begun wondering why he has waited so long to fill his campaign platform with policy details. That lack could help explain why the SPD has been falling in nationwide polls in recent weeks.

Plus, there have been a few minor missteps from the campaign team at SPD headquarters. One of them was the recent photo released of him staring morosely out of the window as his train sped through Schleswig-Holstein. The ensuing derision and mockery were not insignificant.

Plus, questions remain about his relationship with ex-SPD head Sigmar Gabriel, despite their insistence that they have an intimate rapport. Since becoming foreign minister in late January, Gabriel's popularity ratings have been rising -- a sharp contrast to the unimpressive survey numbers he consistently delivered when he held the SPD reins. Inexplicably, Gabriel will be holding an event on Monday to present his new book -- at exactly the same time as Schulz's policy speech. The pair's teamwork could use some improvement.

The vote in Schleswig-Holstein, however, did deliver one small sliver of hope. It showed that it is possible for challengers to win against incumbents.

And yet: Angela Merkel is a far cry from Torsten Albig. 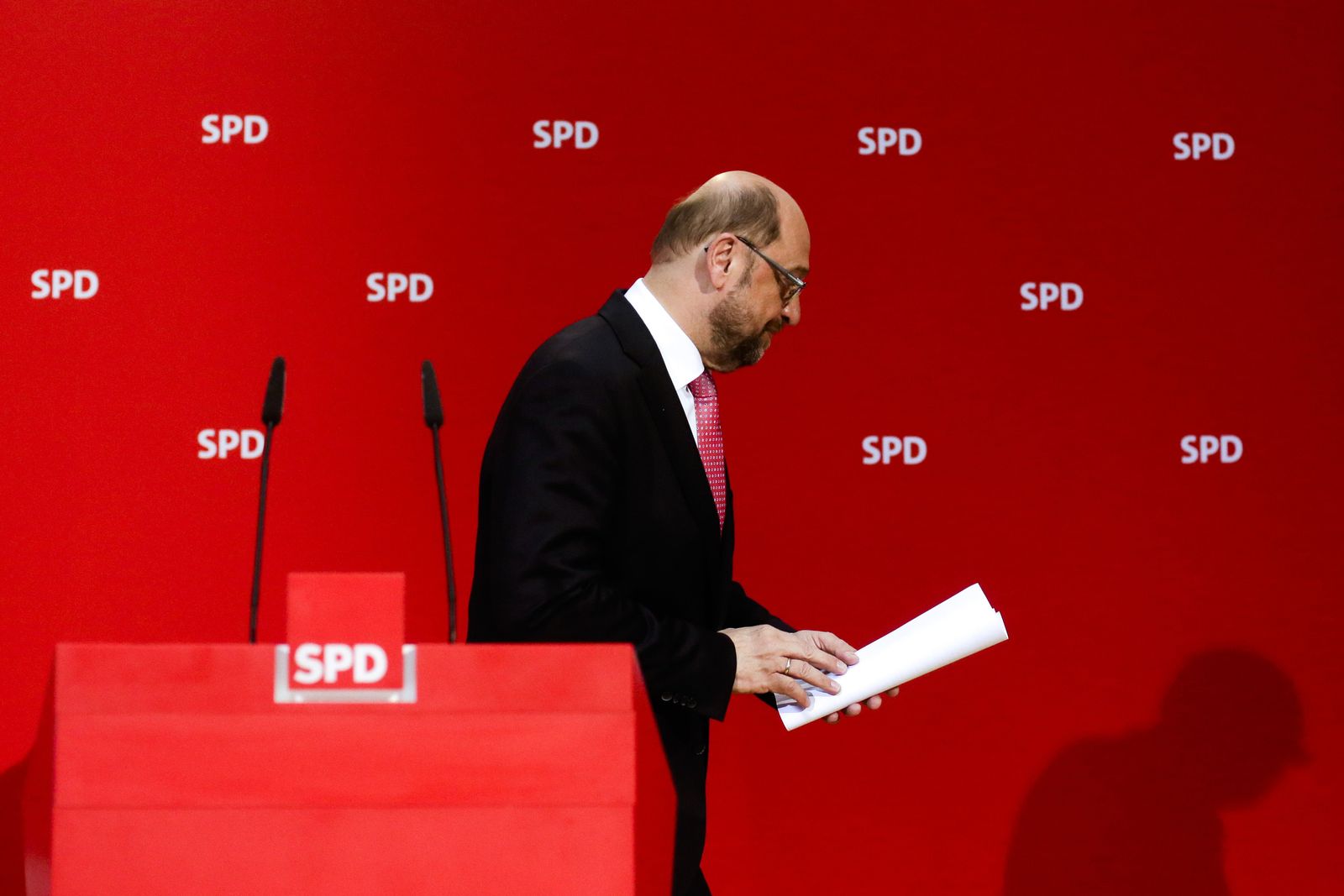