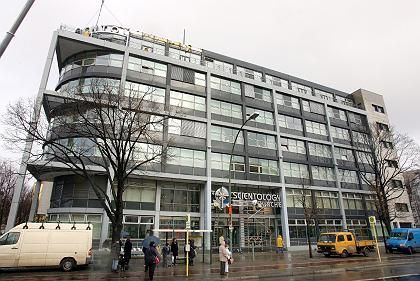 The controversial "Church of Scientology" has opened a new branch in Berlin.

At first sight, the building in Berlin's Charlottenburg neighborhood looks like a run-of-the-mill office complex: a functional, seven-story construction covered with glass windows. The young receptionist is dressed in black and wears a futuristic-looking headset.

But for Scientologists, the building is a chapel, a place for studying their own doctrine and, perhaps most importantly, a political statement: We're back. Or rather: We're still here.

The "Ideal Org," as the Scientologists call the building, is their new base in the German capital -- and it's located just a few minutes from the federal parliament building, the Reichstag. Its official opening was celebrated with a glamorous party in January. To boost the public relations impact, jazz musician Chick Corea performed as the star guest.

The Scientologists chalked up a success with the surprise coup. The opening of the showy new flagship just around the corner from the central nervous system of German politics caught Berlin's local government body, the Senate, by surprise. Worse yet, it was a government-owned realty developer that sold the modern office block on Otto-Suhr-Alle to what seemed like a perfectly harmless Copenhagen-based real estate company in 2005. The Danish capital is home to an "Advanced Org," a kind of European headquarters for the self-proclaimed religious community.

Scientology is mounting an offensive on Europe's capitals and major cities. "National offices" already exist in Madrid, London and Brussels, and the opening of new branches was discussed at an "expansion summit" last year. "If we are to implement our planetary campaigns for salvation, then we have to reach the top levels of the German government in Berlin," a Scientology document states, adding that the Berlin headquarters is responsible for "building the necessary in-roads to the German parliament, in order to ensure that our solutions are genuinely introduced to the whole of German society."

Friendly young people with tunnel vision have been swarming out into the German capital day after day since the beginning of the year, on a quest to win passersby, students or tourists over to the crude teachings of the organization's founder, science fiction author Lafayette Ron Hubbard. The Scientologist missionaries have set their sights on members of the German parliament, too. A smiling Sabine Weber, vice president of Scientology in Germany, explains that their job is to speak to as many interested politicians, representatives of public authorities and potential influencers as possible. Weber makes a point of consistently referring to her organization as the "Church of Scientology." Weber says that she and her colleagues are "very active," especially in the area of combating their alleged "discrimination" by established churches and authorities.

But that countervailing pressure will continue to increase for the near future. The federal domestic intelligence agency, the Office for the Protection of the Constitution, and its sister agencies at the state level, are alarmed by Scientology's propaganda offensive and want to increase surveillance of the organization. "Across-the-board and systematic surveillance by intelligence means" wherever Scientology is active is a "basic prerequisite" for preventing the dangers associated with the organization, most federal and regional authorities agreed at a meeting in February.

"Scientology has become much more self-confident in public," warns Johannes Schmalzl, the director of the Office for the Protection of the Constitution in the state of Baden-Württemberg. "This is a dangerous group that uses psychological manipulation and has an anti-democratic self-image, a group that wants to break the will of each of its members," he cautions. "That's why we have to take massive counter-action."

The intelligence agency greeted the organization's attempts to set up a newer and larger "ideal Org" in Stuttgart with an intense campaign to offer citizens more information about the controversial group. In their efforts to monitor Scientology followers, his counterparts at the Hamburg domestic intelligence agency in early March reverted to using undercover agents and intelligence methods such as surveillance and wiretapping telephone conversations. In Berlin, officials plan to "decide shortly whether or not statements made by Scientology in connection with its new Berlin branch" provide a basis for taking up monitoring of the organization again, they city's Social Democratic Interior Minister, Erhart Körting, said.

The domestic intelligence agencies' interest in Scientology is returning despite the fact that the organization has been relatively quiet in recent years. When Germany's state interior ministers assessed Scientology as a potentially unconstitutional organization in 1997, Hubbard's followers were subjected to elaborate surveillance measures initiated by the Office for the Protection of the Constitution and its state branches.

Today, surveillance measures against Scientology are still in place in the states of Bavaria, Baden-Württemberg and Lower Saxony, but they were suspended in Berlin following a local court ruling in 2003 that banned all forms of undercover surveillance. Although other states, including Brandenburg in eastern Germany, keep a record of Scientology's activities, the organization seldom pops up in the annual reports published by state domestic intelligency agencies in some areas -- largely because there are few Scientology members in those regions and fewer suspicious activities that would warrant surveillance.

At their regular meetings, the assessments made by members of the state domestic intelligence agencies about Scientology and its relationship to Germany's liberal-democratic founding values differ considerably. The approach to Scientology in Berlin, Hesse and North Rhine-Westphalia, for example, is far more relaxed than in Germany's southern regions, such as Baden-Württemberg and Bavaria. There has always been a consensus among intelligence officials that Scientology is a dubious organization that uses psychological manipulation to recruit and retain members. But does it pose a threat to democracy? Berlin's Interior Ministry claims that one of the reasons it stopped monitoring Scientology was that the organization was "meaningless."

Meanwhile, Scientologists continue practicing their cult with its rituals and dubious "salvation levels," from the so-called "pre-Clear" to the "Operating Thetan Level Eight." This is evident not only from their constant activities to advertize their notorious "personality test." Visitors of the new Berlin headquarters are also presented with an exhibition on the organization's international activities, which offers an introduction to its many "social programs." Many of these programs are hardly recognizable as activities organized by Hubbard's followers.

The alleged successes of the study and tutoring program "Applied Scholastics," complete with its "Study Tech" method, are advertised on colorful A-frames and in modern flat screen TV presentations. The topics next door include Hubbard's approach to the rehabilitation of criminals ("Criminon") and addicts ("Narconon") as well as the struggle against psychiatry ("Death Instead of Assistance").

Those who take the bait and sign up for a course, though, have a hard time breaking away again. Wilfried Handl of Vienna experienced that first hand. Handl was a Scientologist himself for 28 years. By the early 1980s, he had even risen to a top position in the organization, as its executive director for Austria. 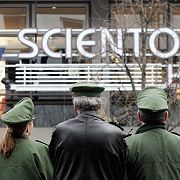 A number of German states, including Hamburg, continue to monitor the Scientologists today.

"Scientologists believe theirs is the only doctrine leading to salvation and they strive for world domination," the ex-Scientologist explains. He now believes the organization is "clearly unconstitutional." Hubbard's writings envision civil rights being granted only to advanced Scientologists, so-called "Clears," he says. Handl claims to have invested more than €150,000 ($199,087) in the organization and to have achieved "Clear" status, but he began questioning his beliefs after repeatedly falling ill with cancer. According to the Scientology doctrine, Clears should not be affected by such earthly inconveniences.

Handl describes Scientology and the methods it uses today as "modern slavery."

The organization even operates its own intelligence agency of sorts, in the form of the Office of Special Affairs (OSA), which the German domestic intelligence agencies are closely monitoring. Internal OSA papers feature statements on the "vital duty" of "dealing with repressive elements in society that can obstruct our expansion."

Ex-Scientologist Handl is even in favor of excluding today's Scientology members from certain professions. Hubbard's followers have no business caring for or educating children and adolescents, in his view, just as they should not be allowed to practice medical professions. The "Ideal Orgs" in various European capitals, such as the one in Berlin, are essentially pursuing a single goal, according to the ex-Scientologist: "Infiltrating politics and influencing influencers."

Scientology spokeswoman Weber refutes the allegations. "We're apolitical, we do not intervene out of principle in political affairs and we respect the law," she says. The German equivalent of the OSA is responsibly solely for "public relations work and legal services," Weber says. She would like nothing more than to show politicians and civil servants the new building in the German capital, she adds -- from the cleansing program with its treadmills and the sauna nextdoor to the office always kept available for L. Ron Hubbard in case he should visit. Never mind that the top Scientologist died in 1986.

But Weber doesn't seem overly optimistic that political celebrities will stop by any time soon. She says she has unsuccessfully invited representatives of both state institutions and the country's official churches to contact Scientology "whenever there should be any kind of conflict."

Then again, the organization is used to taking the long view: Scientologists who want to join its elite body "Sea Org" must sign a contract committing themselves to the organization for a billion years.